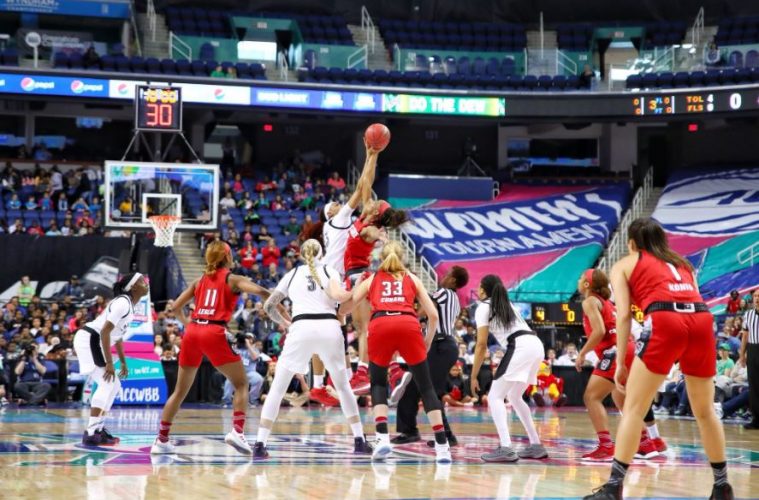 University of Louisville athletic director Vince Tyra and president Neeli Bendapudi were both in attendance as the Louisville Cardinals women’s basketball team faced the Wolfpack of NC State in the ACC semifinals. I didn’t see him, but I’m pretty sure the ghost of Yogi Berra was floating around somewhere in the Greensboro Coliseum as the Cardinals experienced a bit of, “Déjà vu all over again.”

It took three full quarters for the Cardinals to exorcise the Tigers on Friday night. The Wolfpack ghost was busted in about 15 minutes. At the end of Q1, however, the Louisville women found themselves down 23 to 17 after going 1 for 6 from three-point range. Asia Durr had no points from the field, and only the dynamic duo of Bionca Dunham and Sam Fuehring was keeping the offense rolling. Meanwhile, NC State’s Crutchfield (17 points, 3 for 4 from three) and Konig shot well from the perimeter early on and pulled the defense up high. That allowed Elissa Cunane (20 points, 6 rebounds) room to maneuver inside, and once again the Cardinals were having difficulty closing down the lane.

Fortunately NC State suffered a total protonic reversal just as the Cards found the range. Louisville hit four straight three pointers (including Asia’s first of the afternoon) over a two minute stretch to take back the lead and suddenly they couldn’t miss. Meanwhile, NC State coughed up the ball seven times during a four minute dry spell. The Cards finished the half on a 19-0 run to make it 44-34 and Card Nation breathed a small sigh of relief.

The funny thing about ghosts, however, is that they have a tendency to haunt you. NC State started the second half slowly, but steadily. A cold stretch of Cardinals shooting was met by the Wolfpack shooting an unbelievable 75% from the field to start the third quarter and within seven and a half minutes the Louisville lead had been erased. And just like the first quarter it was the furious work of Fuehring and Dunham in the post that kept the Cardinals in the game.

Another funny thing is that déjà vu seems to find a way to repeat itself. It’s the ouroboros of clichés. A stressful first quarter was followed by a stunning second quarter for the Cardinals. Likewise, a maddening third quarter was followed by a satisfying endgame. Asia Durr was calm, cool, and collected as she notched 8 of her 20 points in the fourth quarter on majestic jump shots from the wings. Nothing in life is easy and the Wolfpack went on a 5-0 run to cut the lead to six as the clock wound down, but time had run out. Wes Moore was forced to start fouling and the Cards hit their free throws down the stretch to seal the 78-68 victory.

As with the majority of Louisville wins, this was a total team effort both defensively and offensively:

NC State gave it their all but it wasn’t enough. When the Cardinals are on, they’re on. Jeff Walz gave special credit to the Wolfpack’s Cunane; as a freshman she’s averaging 13.6 PPG and 5.7 rebounds. Walz predicted in the post-game presser that she’d easily be an All-American by her junior or senior year. Credit to the Wolfpack for not quitting when the chips seemed down, but it seemed like a lot of those runs had a lot to do with the Cardinals’ lack of execution.

I asked Jeff Walz about a moment late in the fourth quarter when victory seemed nearly assured, but he still took time to coach Jazmine Jones who was on the bench after fouling out. Why spend time instructing a player who’s out of the game? The coaching never stops. Walz saw a weakness in the Cardinals inbounding defense and is not one to miss an opportunity for a teaching moment. “Dumb loses a lot more than smart wins,” he said, giving credit to strength coach Beth Burns.

And now, the fateful showdown. It will be exactly two months ago Sunday that the Cardinals traveled to South Bend and, despite a spirited effort, fell to the Irish for the first of their two conference losses. Notre Dame easily handled Syracuse in the first semifinal of the afternoon and looked amazing doing so. Muffet’s got her squad firing on all cylinders, and they look ready to fight for what may be the deciding factor in who gets the Chicago region one seed. The Cardinals had a rough three quarters on Friday night, followed by a rough two quarters on Saturday. In January it was a weak third quarter that handed the Irish the win. Will Jeff Walz be able to push his team to execute for the full 40 minutes? Time will tell. Fortunately we don’t have to wait that long.

Tip-off for the ACC championship game is scheduled for 12:00 EDT Sunday on ESPN2. Note the D for Daylight.

Don’t forget to spring ahead!