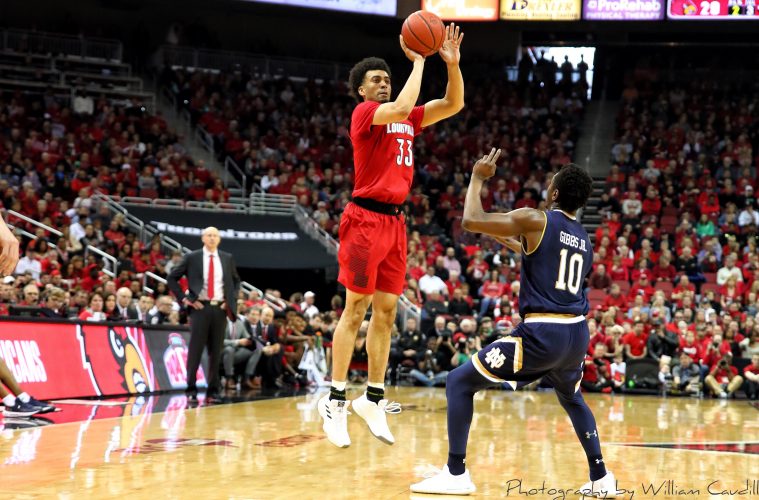 I’m personally kind of tired of University of Louisville teams playing Notre Dame in ACC tournament games, but life has a way of kicking you when you’re down. Damn you, universe!

Because reality sucks, the Notre Dame men’s basketball team defeated Josh Pastner’s literal Ramblin’ Wreck Tuesday afternoon and advanced to a Round Two match-up with the the seventh seeded Cardinals. And that’s not to say that the Irish didn’t do their damnedest to screw it up. A 21 point lead with 15 minutes to go slowly dwindled to three at the one minute mark. Fortunately for Mike Brey, John Mooney and Juwan Durham calmly closed out a late game situation with a jumper and a block while the Irish hit their free throws down the stretch to earn their fourth conference win of the season. Notre Dame’s four conference victories have come against two opponents: Boston College and Georgia Tech.

Last time out against the Irish on Senior Day at the KFC Yum! Center the Cardinals avoided the late game dramatics by building an maintaining a solid lead. As Christen Cunningham said, the focus was to get back the offensive swagger that the Cards had been missing. And swagger they did in a 75-61 romp.

Malik Williams has found his groove in the paint with a double-double against Notre Dame and a strong performance at Virginia. Jordan Nwora seems to have settled into an offensive rhythm and had a double-double of his own against the Irish. Dwayne Sutton is getting into a pattern of steady contribution. Christen Cunningham does what he does, and is missed when he’s on the bench. And so the question remains one of consistency.

As for the Irish, 6’9″ chartered accountant John Mooney led all scorers and rebounders for the Irish in both the game at Louisville and Tuesday’s against Georgia Tech. Nate Laszewski was a threat from beyond the arc in the ACC first round, but went out with a back injury after a hard fall and is not expected to play Wednesday against the Cardinals. Juwan Durham and Dane Goodwin were non-entities against Louisville earlier this month, but both came out strong against Tech as the Irish had one of their best shooting performances of the season.

If the Cardinals can take care of Notre Dame on Wednesday night, they’ll advance to a match-up with Ol’ Roy’s blue bag of Heels. Here’s how Chris Mack’s crew can guarantee a rubber match with North Carolina.

They Call Me Mr. Glass

Despite the troubles elsewhere, the Cardinals owned the glass on Saturday at Virginia just as they did against Notre Dame a week prior. Both efforts were by committee, and that’s the kind of thing you need going into a stacked post-season. Malik and Steven will have to stand strong against Mooney in the interior, and if the Cards can generate second chance points it should be a relatively easy affair.

One key to the Cardinals’ victory over the Irish a week and a half ago was limiting good outside shots. Sure, Mooney had a great day inside. But that alone isn’t enough to gain a win as the Irish went 9 for 26 from beyond the arc. Against Georgia Tech they were 8 for 14, but overall shooting was 47.4% compared to a relatively weak 38.7% against Louisville. Most of the Notre Dame guards were a non-factor on Senior Day apart from Prentiss Hubb, and with Laszewski on the bench it will be tougher for the Irish to produce outside the paint. Stick with your man and switch off screens to limit open shots, and force the ball in low where Malik or Steven can use their size to defend.

Sometimes it’s all about exorcising a ghost. With a win over Notre Dame, the Cards broke a streak and restored some confidence in themselves. The important thing is to not dwell on the loss at Virginia, but rather focus on the positives. Louisville had 68 points against the Cavaliers, second only to Duke’s 81 against Virginia at John Paul Jones Arena this season. The Cards must say to themselves, “We have not yet begun to fight.” Yeah, that’s a stretch, but I’m a sucker for a good John Paul Jones reference.