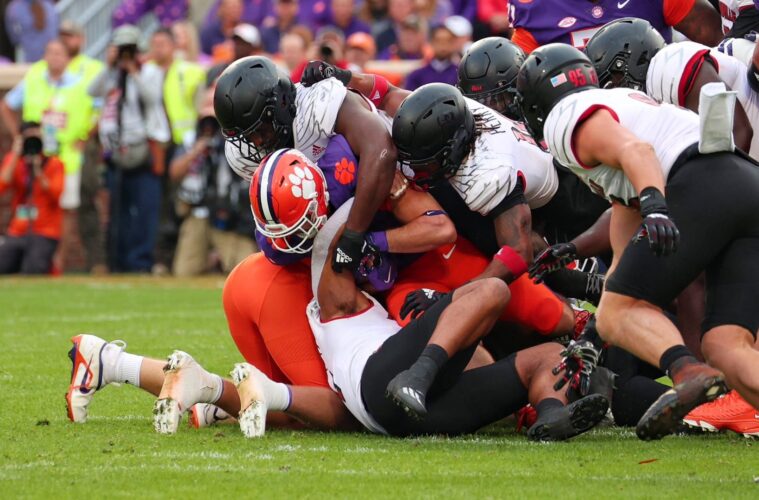 Momentum is a hell of a thing. It can carry you down a hill after you touch some dumb rock. It can propel you through a four game winning streak. It can bring you to a screeching halt. Scott Satterfield and the Cards strode into Death Valley with heads held high and plenty of velocity. Dabo Swinney, his Tigers, injury, and crap calls proved to be the immovable object as Clemson bested Louisville 16-31.

The Cards won the toss, deferred, and the Tigers did not hesitate. Despite a near interception and two Tigers false starts the Louisville defense 75 yard 4:43 drive capped by a Uiagalelei keeper TD to make it 0-7 in favor of the home team.

Missed opportunities would prove to be a theme as a clearly uncomfortable Malik Cunningham captained a three-and-out. Cunningham’s non-throwing hand was bandaged prior to the game and it quickly became clear that it was hampering him far more than had been implied.

As has been the trend the Louisville defense did stiffen on the next Clemson drive, holding them to a field goal. With the Cards back in charge and the first quarter winding down some momentum did begin to make itself apparent. Despite the quarter ending with Tiyon Evans going to the turf in apparent pain (trapped ankle) it didn’t seem to phase him as he opened scoring for the Cards on the second play of the second quarter to make it 7-10.

Yasir Abdullah and YaYa Diaby then took things into their own hands with a sack and strip fumble recovery. On the ensuing Louisville drive it did appear for a time that Malik was more comfortable and confident. But the Tigers did not seem to be threatened by his run capabilities. Attempted trickery with Braden Smith was quickly smoked out, and Malik would finish the first half with only 20 yards on the ground.

The next Clemson drive reminded us what it’s like in Death Valley. As the Tigers marched down the field the Cards towards the end of the half the Cards received their second penalty of the game and it was a doozy. Josh Minkins had his Clemson man beat, but Will Shipley made a little contact and earned his Oscar as the PI flag was thrown from behind the play. Despite their best effort Louisville found themselves down 7-17 with just over 30 seconds to play in the half.

Some tosses up the middle and corresponding timeouts put Louisville on the Clemson 40. A once again clearly uncomfortable stayed on the field and left many Cards fans scratching their heads. Instead of a long range field goal attempt to end the half, Satterfield opted to go for it. Malik could not find any open options and rushed 26 yards, well short of a TD, while diving to the turf. He did not immediately get back up and it was clear he was banged up somewhere other than his hand. He would not return in the second half, with Brock Domann coming out of the halftime locker room to attempt the comeback.

Starting with a three-and-out was not auspicious. Things started to fall apart and Clemson started to get cute. A bogus facemask call was followed by a pass back rush from Uiagalelei. While that was fortunately stopped, the drive ended with a soul crushing Clemson TD run featuring a familiar looking hurdle from Will Shipley on a 25 yard run.

The Cards did make one last valiant effort with Domann at the helm. A dime to Tyler Hudson for 54 yards put Louisville in the red zone. But keeping with the theme of missed opportunities the Cards would settle for a field goal to make it 10-24.

It was downhill from there despite another impressive effort from the Louisville defense. A Clemson interception with 5:40 to play in the fourth dropped the wind from Louisville’s sails. In garbage time the Tigers and Cards would trade touchdowns to make the final score 16-31. The final play of the game featured a 31 yard TD pass to Braden Smith. The clock read zero, the referee blew the whistle, and the meeting at The Paw began.

The ups and downs have returned to the downs. Many factors were against Louisville in this game, but perhaps most of all was the simple fact that Clemson is a better team. Next up, N.C. State before the annual match with a UK team that just lost to Vandy. What the future holds for Louisville and Scott Satterfield has reverted to limbo.