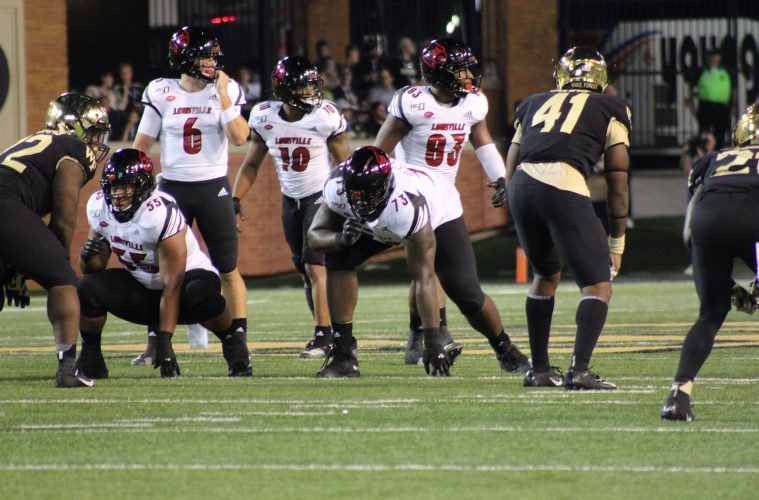 Script flipping was apparently the game plan for both the Louisville Cardinals and the Demon Deacons of Wake Forest on Saturday night in Winston-Salem. What had been was not what would be, and what was expected was not what would occur. But anxiety-inducing back-and-forth aside, a shockingly resurgent Cardinals football team strolled into BB&T Field and knocked off the #17/#19 team in the country by a score of 62-59 for their first ACC road win since 2017.

Anytime you’re talking about a game with a 121 point total that had an over/under of 65 you’re obliged to talk about offensive fireworks and defensive failings. That is certainly the obvious and easy narrative, but the contest in Winston-Salem was anything but mundane. It’s difficult to fully recite how the Cardinals got to 4-2 but we’ll do the best we can.

Keys to the game leading up to kickoff were simply put, if not simply executed. Keep the Wake Forest offense off the field as much as possible via intense defensive pressure. Force the Deacons’ QB Jamie Newman into a hurry-up and exercise patience and poise as you funneled him into a rushed decision. And with your offense on the field, strike hard and strike often.

When Wake Forest, the least penalized team in the nation, committed a false start on the very first play from scrimmage it raised a few eyebrows. But when the Cardinals defense gave up a conversion to Wake Forest after 3rd and 15 it felt like the status quo would be maintained. And so when the Deacons’ Cade Carny was forced to fumble after 358 consecutively successful carries it became clear that the game would be anything but predictable and stress-free. Of note, of course, was the fact that Carney’s last fumble (in 2016) came against the Louisville Cardinals.

And so it’s really impossible to pick a single trend or narrative from this game. Wake Forest had held opponents to 28 points total in the first quarters of its previous five games combined. Louisville was just 10 seconds shy of matching that total in the first quarter of this game alone. A Javian Hawkins rushing touchdown from eight yards out capitalized on the fumble recovery and the opening salvo belonged to the Cardinals. In what many predicted to be a tit-for-tat affair it was certainly satisfying to draw first blood.

When the Louisville defense returned to the field it did so as a resurgent force. Despite some minor missteps it was clear that the secondary was prepared for the dreaded RPO. Every one of Wake Forest’s strengths was repeatedly turned against them as the Louisville DBs and D-line put continuous pressure on Newman. Poise and patience forced Wake Forest into committing to a line and all too often a Louisville defender was waiting to fill the gap. With the Louisville offense back on the field it was left to Micale Cunningham to find Seth Dawkins for a 50-yard TD pass across the middle. Dawkins’ TD came with some fancy footwork and to the shock of many the Cardinals were quickly up 14-0.

The next drive found the Demon Deacons settling into their traditional (fast-paced) rhythm and the Cardinals were put on their heels. Newman found himself with ample time to develop the play and find the open spaces. Nothing was made easy, as Anthony Johnson nearly forced a second fumble with a textbook strip but Wake Forest quickly fell on the ball. Despite having Wake Forest pinned on 3rd and 9 the first down was given up on a three man rush and the Demon Deacons soon found the end zone  on a pass to leading receiver Sage Surratt.

Just as everyone settled in for what seemed to be developing into the anticipated slugfest, in steps Hassan Hall. Streaking out from two yards deep in the end zone, Hall cut left on a dime to sidestep the entire Wake Forest coverage team and flew the length of the field to put the Cardinals up 21-7. Despite the short break the defense forced another Deacons three-and-out. Not wanting to be left out of the fun, Tutu Atwell streaked 50 yards on the punt return to the Wake Forest 13 yard line as the first quarter came to an end. It would take just 10 more seconds to score the next touchdown as Micale Cunningham found Tutu Atwell who stretched it out for the TD to make it 28-7.

And then things started to get truly crazy. Jamie Newman found the end zone again (with help from the umpire as an extra blocker) to make it 28-14, and on the ensuing Louisville drive the QB injury bug bit again. Micale Cunningham rushed with a keeper as Tutu Atwell let go of his block a bit early. The Wake Forest tackler came off the block and went low, directly into Cunningham’s bad leg. The Louisville QB windmilled and the ball came loose, only to be scooped up by the Deacons. Newman would hand off to Cade Carney for a rushing TD to quickly capitalize and what had been a potential romp was suddenly 28-21.

With Cunningham injured (again) it was left to Evan Conley to (once again) line up under center and lead the Cardinals forward. It was quickly clear that the tenor of the Louisville offense had changed. The run-centric Satterfield attack morphed into a Conley-led passing game that, while impressive at times, was frustratingly youthful. The Cardinals defense held its own as the first half came to a close, most notably with a Yasir Abdullah interception. The pick was even sweeter given Louisville’s deference after winning the toss, and the Cards would take the ball to start the second half.

After another stellar Hassan Hall kick return to the Wake Forest 15, Evan Conley found Dez Fitzpatrick for the TD with just 22 seconds gone in the third quarter. Offensive efficiency was the word of the day, but Conley would quickly remind everyone that he was a true freshman. Just when the Cardinals had their foot on the Deacons throat the young QB threw a poorly considered pass straight into Wake Forest’s waiting hands. With wide open space in front of him it was a rushing first down ready for the taking, but the costly mistake followed by a case of busted coverage against Sage Surratt put Wake Forest right back in the game.

If things hadn’t already been weird by this point, this is where things became insanely weird. Throughout the game there had been moments where Scott Satterfield’s play calling seemed a bit too cute. An attempt by Tutu to Marshon for a TD in the first half was paired with an ill-advised onside kick attempt that gave Wake Forest excellent field position. Still, the Louisville defense managed to do its best to staunch the steady Wake Forest attack. As the third quarter came to an end, Rodjay Burns collected Newman’s tipped pass thanks to Dorian Etheridge’s pressure. Evan Conley, meanwhile, showed a level of growth not expected from a person his age as he settled in to a rhythm that would lead to late-game heroics.

The final sequence began near the 10-minute mark with a Conley to Fitzpatrick 50-yard TD that was the highlight of Fitzpatrick’s stellar night. Wake Forest would answer then force the Louisville offense off the field. Dorian Etheridge would be ejected on the ensuing drive after being called for targeting, thus depriving the Cardinals of his strength for the remainder of this game as well as the first half of the Clemson game. And as any team would in this situation, the Deacons turned to onside kicks with around six minutes remaining.

The first was unsuccessful and Blanton Creque punched in a field goal to make it 55-38. Wake Forest used just 1:23 on the ensuing drive to go 69 yards in seven plays to bring it back within 10. The next onside attempt found Tutu Atwell smacked out of the air as the ball flew loose for Wake Forest to recover. Wake would make good despite Jamie Newman’s absence due to injury as Sam Hartman found Surratt in the end zone to draw up within three.

It was left to Evan Conley to show his newfound poise on the next drive. A crucial third down showed the freshman’s improved decision-making abilities as he rushed for what seemed like a first down, but was ruled just barely short. Opting to go for it, Scott Satterfield demonstrated a brilliant piece of play-calling as Conley faked the handoff and rolled around the end for an easy touchdown. With 2:15 to go and a 10 point lead you might think it was safe to wrap things up, and you’d be wrong.

Wake Forest backup QB Sam Hartman wasn’t ready to let Evan Conley have all the fun, and pushed the Deacons 92 yards down the field in seven plays to make it 62-59. With just 1:10 to play, Dave Clawson once again called for the onside kick, and Tutu Atwell managed to secure the ball and allow the entire city of Louisville to stop holding its breath. It wasn’t without controversy, however, as the officials reviewed their final play of the evening in what turned out to be a four-and-a-half hour game. But the ruling came in favor the Cardinals, and the victory formation was assumed. At last, the Cardinals had the win.

Now at 4-2, hopes turn to a bowl bid. But first the Cardinals must confront Clemson at Cardinal Stadium next Saturday. But judging by the performance so far, you’d be fool-hardy to rule anything out for this team.