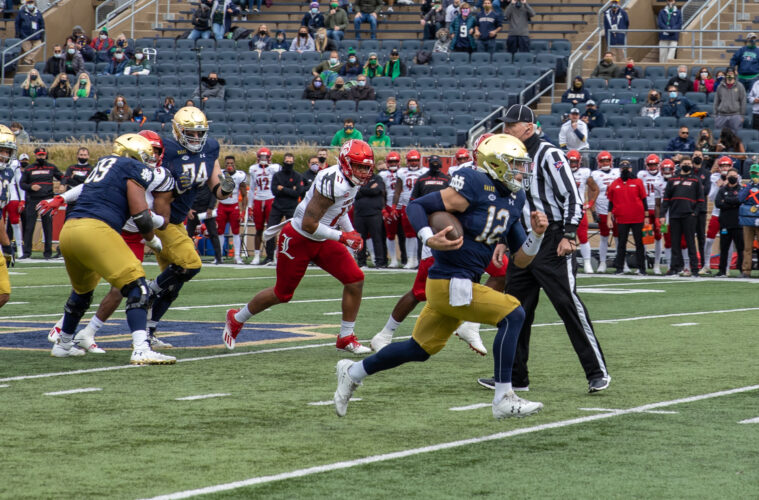 Given the performances against Miami, Pitt, and Georgia Tech you wouldn’t be faulted for expecting little from the 1-3 Cardinals against #4 Notre Dame. On a cool, overcast, and windy day in South Bend the Louisville football team managed to deliver quite a bit more than anticipated thanks to a hot defense and some second half energy.

In the end they were able to deliver nothing more than a moral victory as the Cards fall to 1-4 for the first time since 1997 courtesy of a 7-12 loss to the Irish.

Pre-game keys to victory had the focus on ball handling and tackle efficiency. The Cardinals were able to deliver fully on one key with zero turnovers, but failed to force the Irish into coughing up the ball. A stagnant offense during the first half limited opportunities. By the end of the first 30 minutes the Cards had held the ball for just 8:03 to Notre Dame’s 21:57.

Yet at halftime the score was a mere 0-6 in favor of the Irish. The Cardinals defense was dialed-in, doing everything they could to give the offense an opportunity to find a rhythm. Chandler Jones put in a mostly impressive performance while Marlon Character sat the first half for targeting against Georgia Tech.

Kei’Trel Clark: “I felt like we balled out. I feel like there some mistakes on the field, but as a secondary I feel like this is the best we’ve played all season.”

But Monty Montgomery’s performance (13 tackles, 11 unassisted) stood out. His two sacks were joined by two others and found the Irish sacked more times in one game than their combined total for the season. Isaiah Hayes and Jared Goldwire added strong performances to keep the Cards within striking distance.

Malik Cunningham: “It [the Louisville defense] was like night and day; they were flying to the ball. They bent a little but they did not break. I salute those guys.”

The completely stagnant offense came out firing in the second half and was hitting all the keys. Malik Cunningham distributed the ball well as opposed to focusing solely on Tutu Atwell. Javian Hawkins looked steady on multiple plays including a 28 yard beauty of a pass from Cunningham. Marshon Ford connected as well and caught a TD pass from Cunningham that ended up being Louisville’s only points of the game.

After possessing the ball for just 8:03 in the first half the Cards held it for 7:23 on the first drive of the second half alone. Shocking nearly everyone, Satterfield called for an onside kick which Braden Smith recovered. But in a sign of things to come the play was reviewed and the officials negated the recovery after calling a penalty after the review. Per the rule book this is allowed, but caused many murmurs in the press box.

The Cards had eight penalties for 65 yards while the Irish suffered just three for 18 yards lost. With an already limited set of opportunities the offense once again found ways to hamper themselves.

Malik Cunningham: “The penalties on the offensive side of the ball really slowed us down. We didn’t have a lot of opportunities and a lot of those penalties dropped us. Those things killed us today.”

The Louisville defense that had been so stout began to waver. After the onside kick was negated the Cards elected to kick it away. The Irish marched downfield on the ensuing drive and capped it with an Ian Book rushing TD. Chandler Jones went for Book’s knees but Book slipped through for the score. It was one of many missed tackles that sullied an otherwise impressive defensive performance.

With the Cardinals still in the game as time wound down, they found the means within themselves to miss every chance. A Malik to Dez Fitzpatrick pass was broken up on third down but Notre Dame’s McCloud was flagged for PI. The Cards were then flagged for illegal formation and a false start on consecutive plays.

Having kicked away their last chance, the tired defense allowed Notre Dame to convert on third down and milk clock which inevitably sealed the Cardinals’ fate.

Still, Louisville’s defense managed to hold an Irish team averaging 40-plus points per game to just 12. A defensive line that hadn’t been spectacular found the gusto to penetrate and take down Ian Book four times. Monty Montgomery nearly tried to win the game himself in what is hopefully a sign of more to come.

Monty Montgomery: “We’re much better, much more developed, much more precise with everything we’ve been working on. We’re going to keep getting better every week and I believe we have an opportunity to be the best team in the country.”

Satterfield: “I told our guys in our locker room that I was proud of them…we were in this game and had an opportunity at the end to get a victory.”

When the Cardinals offense was executing, it looked solid. Malik looked confident in the pocket. Despite getting knocked around late in the game he returned and looked none the worse for wear. Mixing up his targets proved to be the most successful strategy, but many were left disappointed in play selection. Coach Satterfield mentioned his frustration, in that the dearth of opportunities had the Cards struggling to execute their strategy.

Satterfield: “When you don’t even run 50 plays it’s hard to get into any rhythm throwing the ball. We only had the ball 45 plays and we threw it 21. We’ve got to do a much better job running the ball.”

If the defense manages to play this way for the rest of the season, it provides hope for the offense to find a rhythm. When the offense was executing against the Irish it looked promising, but was too infrequent. The question then rises; if the defense had played this way all season would we be having a vastly different conversation?

All post-game talk was about focus and prioritizing practice. Players were happy with last week’s energy in practice but it just wasn’t enough to get past the Irish today. Whether next week’s energy, and the ever-growing chip on their shoulder, is enough to get them past FSU will just have to be seen.