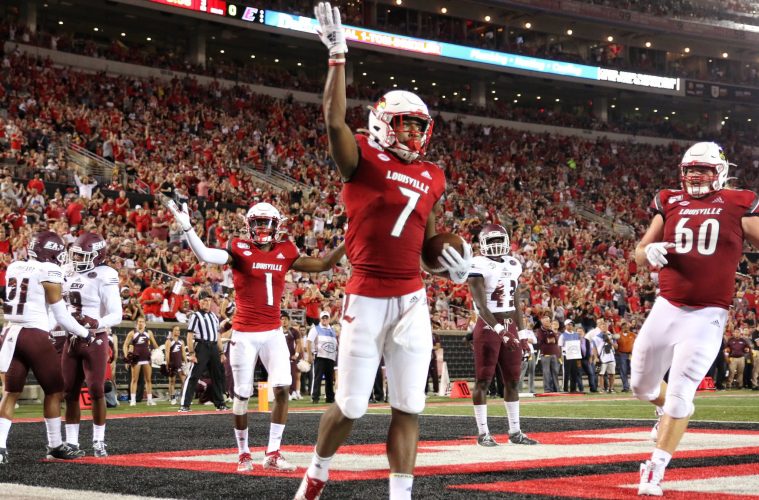 The last time the Louisville Cardinals had won a football game was 51 weeks ago. The last time the Louisville Cardinals had played against an FCS opponent was 52 weeks ago. That game against Indiana State featured floods, false starts, and fuming Cardinals fans as an already teetering season began to topple. Fast forward to a year later and an emboldened Cardinals football team was ready to erase the demons of 2018 with a firm statement against the Colonels of EKU. Erase them they did with a 42-0 blanking of Eastern (but not really) Kentucky.

At times, however, the Cardinals offense did not seem up to the task. Fourteen first quarter points had Cardinal Stadium rocking but a scoreless second quarter elicited a murmuration in the assembled flock. Once again, an overhauled and revitalized defense under the guidance of Bryan Brown gave the offense the breathing room it needed to operate. Five sacks were added to the three against Notre Dame and 2019’s season total is already nearly 75% to 2018’s season total of 11. Rodjay Burns continues to impress along with Dorian Etheridge and C.J. Avery. All good signs for the rest of the season.

The cushion provided by that defense offered ample opportunity for Scott Satterfield and Dwayne Ledford to encourage and sharpen their offense, especially against the FCS Colonels of EKU. After a shaky start against Notre Dame, all eyes were on Jawon Pass. Despite an impressive stat line, thanks mostly to a curl pass for a 50 yard run from Tutu Atwell, Puma’s first half performance left much to be desired. And however difficult it is to find fault in a QB leading a team with a 14-0 margin, faults were found.

But the Scott Satterfield era is one of encouragement and bonding, and Jawon Pass was allowed to shake off any negatives and find his stride. And find it he did. 12 for 19, 196 yards, four touchdowns. Four! The first was the aforementioned curl to Tutu; the second a five yard dump to Marshon Ford. While Pass struggled at times with the long ball, he found his rhythm and began consistently completing passes over the middle to the waiting hands of Atwell, Ford, and Dez Fitzpatrick. Ford would grab a second TD in the second half with Fitzpatrick joining the fun as well.

Javian Hawkins and Hassan Hall looked on and collectively said, “Oh yeah? Watch this.” Hawkins is, in a word, impressive. His 123 yards on the night earned him his second consecutive 100+ yard game. He’s the first freshman since 2008 to notch back-to-back 100+ games, and only the third in school history. Hassan Hall’s contribution was workmanlike, grinding out a rushing touchdown late in the game.

And to a rousing (perhaps overly so) cheer from the remaining crowd, Malik Cunningham entered the game late in the fourth quarter. His first play of the season was a short completion, but his performance was more than adequate along with his own rushing touchdown. It’s difficult to take anything out of a late game performance against a withering FCS opponent, but it’s safe to say that Cunningham looks healthy and ready to contribute.

Saturday, the Cardinals travel to Nashville to face their second cardinally directed opponent. At this point one would be remiss to not point out the eery similarities between 2018 and 2019. Kickoff against a top-10 opponent, followed by an FCS opponent, followed by a matchup with the Hilltoppers. In 2018, it was clear that the trend was downward even during the Indiana State game.

The Cardinals are quickly showing that any sense déjà vu is just a glitch in the matrix.