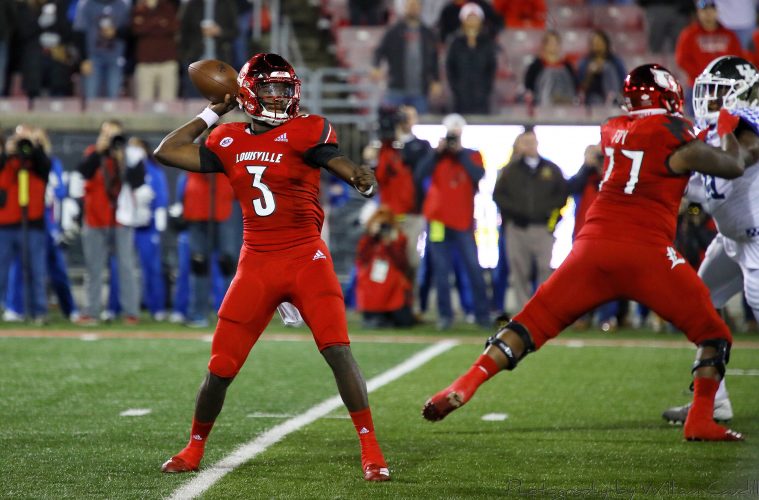 And so it will be written that King Satterday rode forth from the City With No Name on a sunless day. Resplendent in his rain gear atop his motor coach shall he ride, a century of red warriors in his wake. Woe be to him that doubts his resolve! The land of bluegrass shall be a smoldering ruin, painted as blood with the fires of orc.

If you talk to the average Cats fan you might be led to believe that UK and UofL have only played football just the one time in 2018. Therefore the Cats are the most dominant force in college football and a mere D-II school like Louisville Metropolitan College stands no chance against the mighty blue juggernaut. If, instead, you engaged in some of that fancy book learnin’ you might see that Mark Stoops is 2-4 against UofL, the Cards are 7-4 this season (compared to UK’s 6-5), and also that Louisville is an actual city that actually exists.

As an admission, the writer was raised in the foothills of Eastern Kentucky. He was a UK fan until age 17 that converted the day he got his acceptance letter to the University of Louisville. He has lived, breathed, and bled Cats-fandom. They are his people, and he still loves them. But he’ll be damned if Cayats-fandom isn’t the most textbook case of over-compensation in the known universe. The stench of fear coming out of the Bluegrass this week is matched only by that of the horseshit, both literal and figurative.

Lexington – A City That Also Exists

The official hashtag for UK football is #BringIt, but they didn’t bother to specify what we should bring. Therefore I suggest that Scott Satterfield and staff bring a big ol’ can of ass whoopin’ into Kroger Field. Usually it’s cans of Kroger chili hot beans that put a whoopin’ on my ass so turnabout is only fair play.

But taking a more serious look at things, you’d find that a prediction is difficult to come by. That’s most likely why the prognosticators have essentially settled on scratch as the line with only the home field advantage giving favor to UK. The Cats are producing 379 yards per game with 252 of those yards on the ground. Meanwhile, their much vaunted defense is giving up 324 yards per game with equal parts through the air and on the ground. The Cards, in simultaneously stunning and staggering fashion, are gaining 453 yards and allowing 439. Numbers-wise things look to favor the Cats defense, but the ratios aren’t good either way.

As Blankenbaker so rightly points out, the Cats haven’t yet seen this kind of offense. On the flip side, the Cards have faced some of the better defenses in the country and, despite some clear setbacks, still managed to put up impressive numbers. Putting the Cardinals offense and the Cats defense in the same bowl is pouring hot metal into cold water; you’re going to see a lot of steam but they have a tendency to cancel each other out. UK is good at limiting the chunk plays that have been the bread and butter of Louisville’s offense this year. And yes, the Cats do have a great punter in one Max Duffy. Even when the Cardinals defense can get it done it’s likely the offense will be starting deep in its own territory.

And, let’s face it, Lynn Bowden Jr. is a pretty damn good athlete. But it says a lot when UK reports the fact that he’s the QB and the leading rusher and the leading receiver and views that as an accolade rather than an indictment. On the ground, he’s a beast. When he goes to the air, well, not so much. The Cats are who they say they are, so you seen the train coming from a mile away. It was going to be tough to stop it from the get go, but the loss of Russ Yeast makes it just a bit harder for Louisville. Close the gaps, hit your assignments, etc., etc. The resurgent Cardinals will need one last big push from the defense to get over the regular season finish line.

A lot of cool things have happened for the Cardinals this season. Javian Hawkins is putting up Lamar numbers on the ground, has already broken the freshman rushing record, and needs 324 yards in the next two games to match Jackson’s all-time single-season record. Micale Cunningham would be at the top of the QB efficiency charts if he had enough attempts. Tutu Atwell is happy to receive those passes and became the first 1,000-yard receiver since 2007 and needs 193 yards for the all-time record. Only twice before have the Cardinals had a 1,000-yard rusher and receiver in the same season.

Defensively, well, things haven’t been as glamorous. But Bryan Brown’s squad have proven to be crucial in some key moments, and things have trended towards the positive as the season has progressed. Losing Russ Yeast will be a big factor against the Cats but Monty, Rodjay, Yasir, G.G., et. al., have shown a recent spark that may prove to be the difference in Lexington.

These are not the Cards that faced the Cats last season. Based on the talk, it seems UK would like to think they are. That’s their mistake.