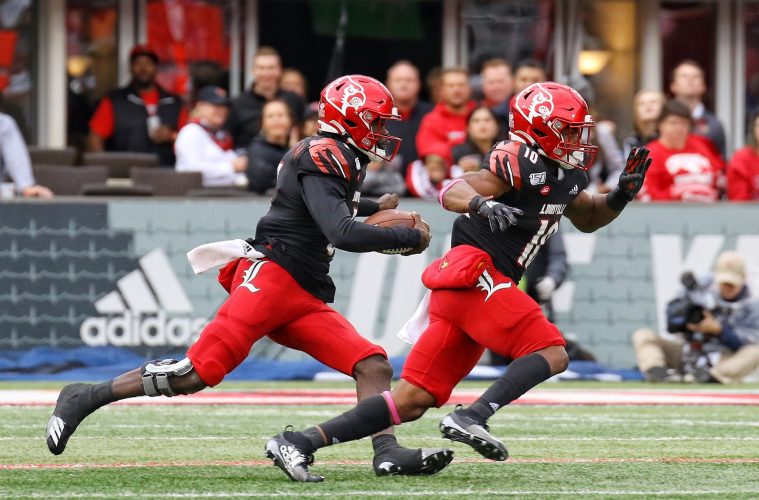 There are few things in the universe more difficult to predict than:

What had been predicted as a torrential monsoon for Saturday was kind enough to dally southwest of Louisville as Scott Satterfield once again vacillated between quarterbacks. Despite the uncertainty, meteorological or otherwise, the Cardinals dug deep for an impressive second half to down the Cavaliers of Virginia 28-21 in front of a (slightly) wet and wild crowd at Cardinal Stadium.

Micale Cunningham once again got the start, as has become standard as long as he’s healthy. An aggressive Scott Satterfield elected to receive after the Cardinals won the toss and Louisville set out to spar with one of the top statistical defenses in the country. Early minor setbacks included a porous offensive line and a questionable fourth down decision, but overall the offense performed quite ably.

It was Virginia, however, that would open scoring after a couple of missed Louisville defensive opportunities. A Bryce Perkins throw into triple-coverage was allowed to fall, nixing an an early turnover. Then, after a high snap, Perkins was still given ample time to find Hasise Dubois for a 39 yard pass that set up a Wayne Taulapapa rushing TD. But the Cardinals quickly answered with a strong ground game and a pitch to Tutu Atwell for an end around 77 yard TD “pass” with a little help from some Marshon Ford blocking.

The second quarter began with the Cardinals once again poised in the red zone, but a stiff Virginia defense led to a Blanton Creque missed field goal from 38 yards. That wide left attempt would prove to be an unfortunate bellwether for Louisville, as Evan Conley stepped in under center for the Cards. Credit must be given to Virginia’s punter Nash Griffin who had a stellar day, including a 78 yard punt (longest in FBS this season) that pinned Louisville inside their own 10. In that position it proved impossible for Louisville to get things moving. An offense that produced 177 yards in the first quarter dwindled to just 10 in the second.

While the offense struggled under Conley, the Louisville defense suddenly found it difficult to contain the Virginia offense. What is normally a one dimensional attack from Bryce Perkins morphed into a multi-pronged assault from both the Cavaliers receiver corps as well as RB Wayne Taulapapa who would finish with two rushing TDs. With Virginia leading 14-7 towards the end of the half they found themselves positioned for a potentially killing stroke, but for the timely appearance of C.J. Avery. The Cardinals junior’s interception in the last minute kept Louisville within a touchdown and gave the Cards a much needed opportunity to reset.

Somebody must have watched Raiders of the Lost Ark in the locker room because someone managed to pull the knife out of the little voodoo doll that had plagued the Cardinals in the first half. The defense was, in a word, resurgent. Quarterback pressure that had floundered in the first half was suddenly placing all the right kinds of pressure on Bryce Perkins. The Louisville defense would finish with four sacks and six TFLs thanks mostly to the second half which included a series of three plays that resulted in a quarterback hurry-up and two sacks. The suddenly enlivened Cards did the work needed to give the Louisville offense time to coalesce and put up 21 unanswered points.

Those second half points? Give the bulk of the credit to Micale Cunningham. A little bit of credit, however, goes to Jordan Mack, the Virginia senior linebacker that was called for targeting on the Louisville QB and found himself ejected. Perhaps this was comeuppance for a missed targeting call on Evan Conley in the first half (even after review) but whatever the case the entire tenor of the game had changed. The Cards ground up the highly-touted Cavaliers defense in workmanlike fashion, with two rushing TDs from Javian Hawkins accompanied by an untouched QB keeper TD from Cunningham. Hawkins, recently named to the mid-season All-American watch list, demonstrated his worth with another +100 yard rush game.

But nothing’s easy, right? After a 21-0 blanking through most of the second half, the tiring Cardinals defense did allow the Cavaliers a two-minute drill drive touchdown. Shades of Wake Forest haunted the assembled Cards fans as the delayed rain began to fall in copious amounts. Almost predictably, the Virginia on-side kick was successful. But it was not to be for the Cavaliers, as the final Hail Mary attempt was knocked down in the end zone to give Louisville its fifth victory overall and third conference win.

A bye week awaits, and the Cardinals can use the rest. In two weeks they’re off to Miami with a bowl bid on the line. Winning the ACC Atlantic is a pipe dream, given Clemson’s dominance. But to finish in the top two in the year immediately following a 2-10, zero conference win season? It’s not that crazy anymore.

Scott Satterfield and staff have done wonders, despite a few hitches along the way. But when asked about attaining bowl eligibility, he said all that mattered was beating the next opponent.