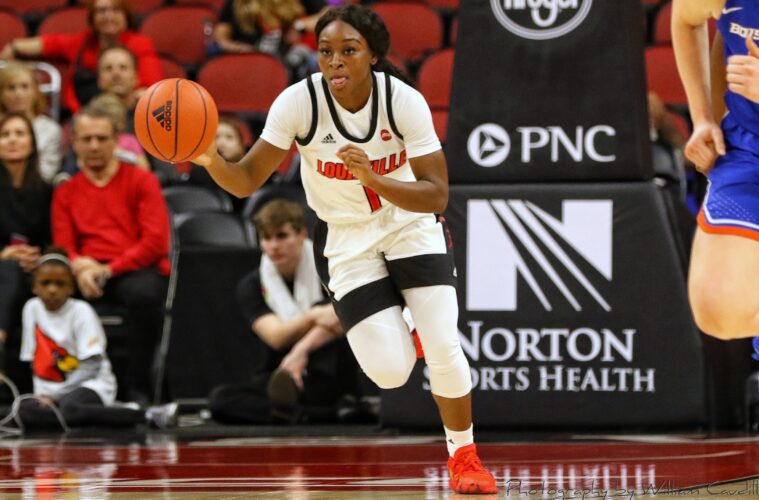 Jazmine Jones scored 24 points and No. 8 Louisville fended off pesky UT Arlington in the second half for a 76-67 victory Thursday in the Paradise Jam.

Dana Evans added 19 points and Elizabeth Balogun had 12 for the Cardinals (6-0), who saw the Lady Mavericks fight back from a 16-point deficit in the fourth quarter.

”I expected this,” Louisville coach Jeff Walz said. ”I told the kids that before we came down here. I was very impressed with watching UTA in film study. They play a physical brand of basketball.

”You try to prep for it, you try to prepare, but until you get down here and get hit in the face, you’re not ready for what’s coming. It just took us a little bit of time to get our feet underneath us.”

Louisville had pulled ahead 70-54 on Evans’ 3-pointer with 6 minutes, 29 seconds remaining. But Texas-Arlington went on a 13-2 run over the next five minutes to pull within five points, 72-67, on Katie Mayhue’s tip-in with 1:33 remaining.

Jones and Evans hit four free throws over the final 37 seconds to seal the victory for the Cardinals.

The Lady Mavericks also gave Louisville fits in the first half, leading by as many as five points late in the first quarter before going out ahead 21-20.

Texas-Arlington was leading 26-25 with 7:01 left in the second quarter when the Cardinals went on an 8-0 run, capped by Jones’ jumper with 5:01 remaining, for a 33-26 lead that put Louisville ahead to stay.

”We knew they were a tough-nosed team,” said Jones, who finished one off her career high in scoring. ”They played hard, ran their stuff and executed really well. We just had to get a feel for them in the first quarter, and we settled down a little bit.”

Claire Chastain finished with 22 points and Marie Benson had 16 for the Lady Mavericks (4-1).

”We know coming in everybody would probably overlook us,” Texas-Arlington coach Krista Gerlich said. ”We just wanted to give it our best shot and try to punch them in the mouth first.