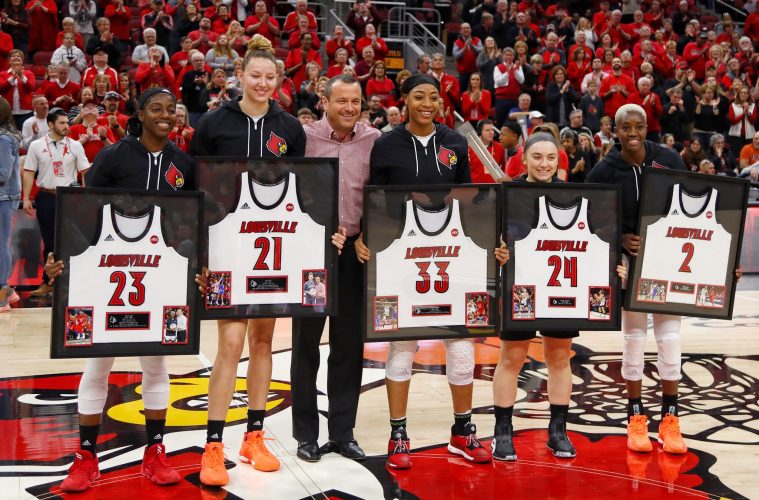 The expected tears were flowing on Senior Day as #5 Louisville women’s basketball faced Virginia Tech Sunday afternoon. Few, if any, dry eyes remained as the senior squad of Laemmle, Diop, Jones, Dunham, and Shook took the court for the tip. With a win the class would notch their 124th win as a group, the most in program history.

The flowing tears soon turned into a river of scoring while the Hokies were dammed by a stout Louisville defense that led the Cards to a 70-53 win to close out the regular season.

With little exception the Cardinals were in command throughout the entire 40 minutes. Controlling the tip, Louisville worked the ball around and with two offensive rebounds finally found senior Jessica Laemmle for the jumper to open scoring. With Laemmle’s moment in the sun complete, Dana Evans checked in about three minutes into the game. It wasn’t clear whether Evans or Elizabeth Balogun would play, but that was quickly decided as both entered the game in the first quarter.

Per Jeff Walz the staff had the confidence to play Evans and Balogun against Boston College but deemed their presence unnecessary. It could be said that the same applied to Sunday’s game as the Cards rocketed out to a double-digit lead. But for whatever reasons, both saw plenty of action with Balogun in play for 15 minutes and Evans 24. Walz also went on to comment that Evans is still not 100% back from her high ankle sprain, and won’t be for at least another couple of weeks. Despite this she’s clearly able to play.

Holding Tech to just eight points in the first quarter it seemed as if the Cards would roll. Then a second quarter spurt led by former Cardinal Taja Cole and inside presence Elizabeth Kitley gave the Hokies an 8-0 run. Cole and Kitley accounted for the bulk of Tech’s superlatives with 12 points, 10 rebounds and 17 points, 8 rebounds respectively. Walz’s strategy of shutting down the perimeter was the key, and he went so far to say that he was content to let Kitley score from the post to her heart’s content. Meanwhile the best three point shooting team in the league was held to 3 of 15. Cole, normally averaging seven assists per game, was held to just three assists.

The cold streak for the Cardinals was not long lived thanks to Jazmine Jones and a stellar Senior Day performance. Jones had headed to the bench but immediately reentered as Bionca Dunham picked up her second foul. Placing the team on her back, the senior reignited the offense. A dramatic Yacine Diop rebound and putback as the horn sounded brought the fans to their feet and the Cards to a 13 point lead into the locker room.

Not content to shift into neutral, Jaz Jones came out of the half going three for three including a three pointer. Jaz uncharacteristically shot five from beyond the arc and made two, joining her teammates to throw up a combined 25 three pointers on the day. Hitting nine, the Cards managed to hit from distance against the best three point defenders in the league. Hokies opponents this season had been held to an average 27% shooting from beyond the arc, hitting less than five per game. The Cards had taken away the Hokies primary offensive threat, while also flipping the script to attack Tech at one of its strongest bulwarks.

Outrebounding, outshooting, and generally outhustling the Hokies showed the Cards are ready for postseason play. While Tech’s Cole said that the Hokies did not play like their normal selves on Sunday, she also admitted that some of that was thanks to Louisville’s pressure. The normally fluid Hokies were stymied repeatedly by the defensive acumen as the Cards called out switches and transitioned defenders seamlessly. Louisville managed to contribute heavily to Tech’s 17 turnovers while committing just eight of their own.

Kudos, of course, to the seniors. Kylee Shook earned her 11th double-double (15 points, 12 rebounds) of the season and did so in impressive fashion against a very physical Virginia Tech post presence. Shook’s 15 were bested only by Jones’ 18 that led all scorers, with Evans rounding out the double-figure Cardinals. Bionca Dunham once again played impressively and nearly matched Shook’s double-double, coming up just short with eight points and nine rebounds. Yacine Diop (8 points, 2 rebounds, 3 assists) and Mykasa Robinson (5 points, 4 rebounds, 3 assists) showed once again that Walz has an impressive amount of backcourt depth as the Cards enter postseason play.

Now, onto Greensboro. The Cardinals will travel on Wednesday and open play on Friday after the double bye. This is the first season in which Louisville has seized the outright ACC regular season title. With the top seed, will this also be the year they secure their first ACC championship?

Kylee Shook post-game made it seem like the Cards are taking a relaxed, but focused approach. Asked about what it felt like to be the winning-est program in the women’s program’s history, she quite casually remembered there was still more to come.

“It feels great though, knowing that you’ve won that many games, and the record in our four years has been accomplished.”

She then turned to Jaz Jones, quietly saying, “Well, not yet. But you know what I mean.”

Jaz could only flash one of her trademarked ear-to-ear grins.