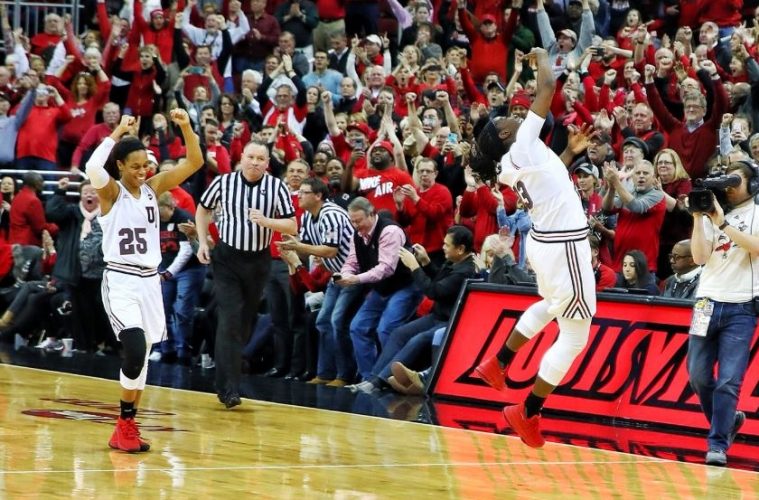 The University of Louisville women’s basketball team defeated the Huskies of the University of Connecticut on Thursday night by a score of 78-69 at the KFC Yum! Center. Savor that like you would a fine bourbon. Give it a good ol’ Kentucky Chew as Fred Noe might say. The Cardinals, defeated the Huskies, who had a record of 241 wins and only eight losses over the past six years while winning four national titles.

The Cardinals had defeated the Huskies only once before, in 1993. Three years before Jeff Walz started coaching. A few years before any of the current Louisville players were born. Walz had never bested Geno Auriemma since beginning his tenure at the University of Louisville. Succinctly put, this was a big deal. One could devote half a novel to breaking down this auspicious event, but we don’t have that. Let’s break it down as best we can, while savoring every tasty morsel.

Undoubtedly the offensive backbone of this team, Asia Durr is often subjected to media commentary noting a slump or a bad night if she misses a few shots or scores less than 15 points in a game. We should all be so lucky. So when Asia went 0-4 from the field in the first quarter, many were quick to point out the danger. Against UConn, those fears were warranted. But, just in case you didn’t know, a basketball game consists of four quarters. Asia Durr began the second quarter with three straight three-pointers, including one involving an insane cross-up of UConn’s Katie Lou Samuelson that pushed the Cardinal lead to 32-26 and got the home crowd on their feet. Never leaving the court, Durr would finish 5-10 from beyond the arc, 8-18 overall with 24 points to lead all scorers. 14 of those 24 came in the second quarter alone. Think of it as giving UConn a one quarter head start.

As anyone with a functioning brain cell could have told you, to beat UConn you have to be firing on all cylinders offensively. So when your leading scorer is cold in the first quarter, you’re going to need a boost. Jazmine Jones provided that boost, and indeed remained a consistent contributor throughout the game on both sides of the ball. Jones would manage six points in quarter one on her way to a 13 point, 12 rebound double-double. Many objective observers can reasonably say that this is not Jeff Walz’s most talented squad. Walz often says that with this team the whole is greater than the sum of its parts. But the manner in which individuals step up game to game is something to behold. Dynamism is a powerful weapon to have as March approaches.

In a night that needed multiple offensive contributors, Dana Evans did not disappoint. It’s continually impressive to watch her ability to take on whichever positional duty is required of her at any given time. In Thursday night’s victory, she was free to roam, and roam she did. 20 points, 5 for 10 from three-point range. This of course took pressure off of Durr and allowed gaps to open for others, thus contributing far more than the point total. Louisville had 20 bench points; Dana Evans had 20 points. Enough said.

The Cardinals did what they needed to do. Durr and Evans would both go 5 for 10 from three-point range, with Arica Carter contributing the eleventh Louisville three-pointer. 40% shooting for the Cards may not seem like much, but when you hold your opponent to 38% and net 11 of 29 threes to their 8 of 21 you’ve got a recipe for success. Jones’ and Fuehring’s contributions in the paint were the icing on the cake. But perhaps the most glorious, yet easy to forget stat was having only five turnovers. UConn can’t score the ball if you don’t give it to them, Q.E.D.

Baylor’s size helped keep the Huskie scoring machine on idle in the Bears’ victory over UConn. Louisville did not have that advantage. Tenacity was the only weapon in the Cardinal’s defensive arsenal. Yes, tenacious D would see Louisville through. I can’t adequately describe how great it was; this is just a tribute. Sam Fuehring absolutely cleaned up the defensive glass with 12 total rebounds, 10 of them defensive. Her 10 points for a double-double weren’t too shabby either. Sam was mauled throughout the entire game but hung tough in 36 minutes of play, earning that double-double with guts and grit. Yet Sam would finish the game with only one foul, frequently demonstrating excellent technique in staying vertical while taking contact head on. Defending without fouling has been a Jeff Walz point of emphasis, and it’s obviously paying off. Bionca Dunham would similarly play well in the post, denying UConn numerous easy baskets. Special recognition, however, must go to Arica Carter. Throughout the night Carter found herself in a mismatch down low against the Huskies’ Collier or Samuelson, who both have at least four inches on Arica. But the scrappy guard would fight it out regardless. UConn attempted to exploit the mismatches all night long, but to relatively paltry results. The Huskies’ 32 points in the paint might seem daunting, but given the number of missed opportunities (many thanks to Carter) it becomes clear how equally critical the Cardinal’s defense was to the victory. A UConn team that normally shoots 40-45% shot 38%; 27 for 71, being eight more shot attempts than Louisville’s. Arica Carter’s stat line doesn’t look impressive, but her contribution to the win was quite evident.

We’ll be brief here. Louisville absolutely had to deny, or at least equal UConn on the glass lest they provide the Huskies the opportunity for easy transition baskets. They did what they needed to do. Fuehring and Jones would lead with 12 rebounds followed by Dunham’s seven, with every other player but one contributing at least two rebounds. UConn was held to 11 second-chance points and zero fast break points. That’s quality.

In his post-game presser, Auriemma would say, “We kinda suck.” That’s a pretty bold statement from the coach of the #2 ranked team in the country. But is it sour grapes? Or perhaps part of Geno’s patented style? Maybe both? One thing Auriemma did say is quite true, however. He opined on whether or not the #3 team beating the #2 team at home would be treated as such a big deal if it was any other sport, or indeed any other team besides UConn. No, it probably wouldn’t. UConn are the Yankees, Patriots, Manchester United, and Serena Williams combined. They are the face of women’s college basketball, and defeating them is any team’s Waterloo moment (as in Duke of Wellington). As for tonight, Collier, Dangerfield, and Samuelson would notch 20, 19, and 16 points respectively. But each time UConn threatened with a run, Louisville’s defense would hold strong. The Huskies were simply unable to exploit the mismatches and switches off screens that normally would provide them with easy baskets. The Louisville Cardinals simply outplayed the Huskies. And forgive me for thinking that a team that whooped then #1 Notre Dame in South Bend doesn’t suck.

This was a special game for a lot of reasons. Jeff Walz has a congenial relationship with Geno Auriemma, but ridding himself of this particular burden must be extra-satisfying. Concurrently, it demonstrates the amazing growth of the program under Walz and his staff. Louisville WBB had not made it past the NCAA Second Round prior to Walz’s arrival. And as he pointed out proudly in his post-game availability, in eleven years he’s progressed to a point where the Cardinals have (in the span of three weeks) contested a #1 vs #2 match-up as well as a #2 vs #3 match-up. Jeff Walz deserves to savor every ounce of this moment.

For the players, most have grown up watching a UConn team that’s won 10 national championships (in their lifetimes). Geno Auriemma and Pat Summit have been the respected lords of women’s college basketball for decades. To take down this Goliath is a special moment for these women. And yet it offered an opportunity to demonstrate their maturity and poise. The first thing Asia Durr said when asked about the special nature of the victory was to say she was primarily focused on the game against Clemson on Saturday. This team is on a mission, a collision course if you will. The time frame for this one may end up being months.

And finally, for the fans. Multiple commentators noted that the KFC Yum! Center was more electric and loud on Thursday night than during men’s games. The crowd was there to watch a basketball game, and they were invested in every moment. As each quarter passed, the energy level surged as if some great capacitor lay beneath Denny Crum Court. Many in the crowd have been with this team since the Cardinal Arena days, if not before. To watch the seemingly inexorable climb towards total success, to have it thwarted on multiple occasions, and tonight to win that special and coveted victory against the great beast. This victory was a great moment for those people, the university, the city, and the game. Revel in it and cherish it.

Just remember, March 29th is still two months away, and it’s Clemson on Saturday. Jeff Walz and crew have their eyes set on a greater prize.