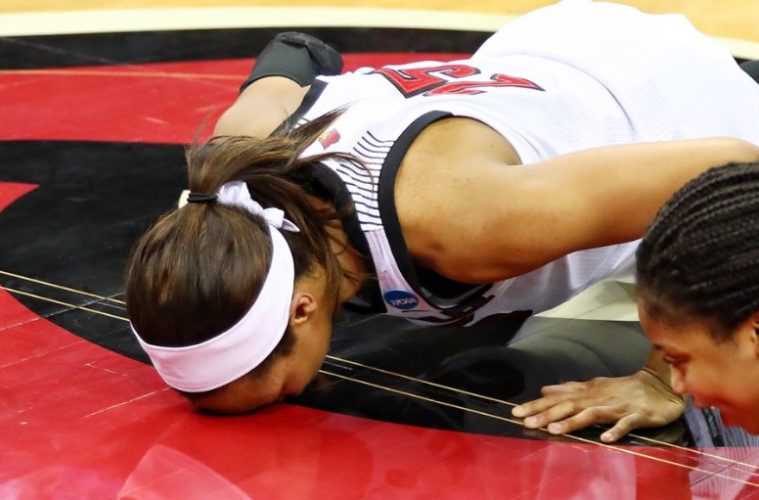 Sunday at noon during Lent in Louisville, KY isn’t exactly the best time to schedule a basketball game. But fortunately for the Louisville women’s basketball team the one thing the city hadn’t given up before Easter was faith in Cardinals basketball. With a noon tip on ESPN2, Louisville was center stage for the NCAA women’s tournament second round with a trip to Albany and the Sweet Sixteen on the line. And in a fitting sendoff for the winningest senior class in UofL WBB history, the Cardinals booked their ticket to New York with a 71-50 dismantling of the Michigan Wolverines.

It was warranted for Cardinals fans to have a bit of trepidation prior to tip off. The Cardinals had struggled in the ACC tournament while both Arica Carter and Sam Fuehring sat the bench with injuries. All of the electricity of Asia Durr’s record setting Senior Night seemed to have been tapped, and a rout at the hand of Notre Dame had some questioning the Cardinals’ post-season prospects. Going into a game against a Wolverines squad with the length to match up well with Louisville inside, you’d be forgiven for a bit of nervousness.

All doubts were swept away in the first five minutes of play on Sunday afternoon in front of a solidly packed lower bowl at the KFC Yum! Center. In fact, the tone was set in the first five seconds as the Cardinals gathered the tip and worked the ball to Jazmine Jones for a quick layup and a lead that they’d never relinquish. Louisville began play with a level of energy that hadn’t been seen since that Senior Night. It was fitting in a way, as thanks to the standards of the NCAA women’s tournament this was a second Senior Night of sorts for Durr, Carter, and Fuehring.

But unlike that offense-driven night against NC State, Sunday’s game was a defensive clinic courtesy of a full team effort. Louisville held their 10th opponent of the season to 50 points or fewer, while limiting the Wolverines’ starting five plus Big 10 sixth player of the year Naz Hillmon to just 28 total points. Michigan seemed discombobulated after the Cardinals’ aggressive start and never quite found a rhythm. Louisville’s onslaught resulted in 22 Wolverine turnovers which were converted to 28 points. The Michigan team on the court Sunday looked nothing like the team that had demolished Kansas State just two days prior.

Michigan head coach Kim Barnes Arico said after the game, “…there probably aren’t very many teams, and I can probably count them on one hand if I can count all of them, that can come into Louisville and play in this environment and not lose by more than 20.”

The atmosphere crackled with energy from the 7,725 loyal members of Card Nation. Like a catalyst, the hot start from Louisville fed the crowd. And like a symbiotic organism the energy from the crowd fed back into the team.

Sam Fuehring: “It was exciting…. Even when we were doing the instructions I was like, the crowd is roaring. I feel like it’s not like this anywhere else, and I’m so appreciative.”

While the energy was primarily focused on defense, it wasn’t exactly an offensive off day for the Cards. Durr, Evans, Jones, and Fuehring would all finish in double figures with Durr leading all scorers at 24 points and 5 for 14 from three point range. Kylee Shook’s aggression and height nearly earned her a double-double on 10 rebounds and 8 points. Shook once again found herself in the starting lineup. And while her starting gig against Robert Morris may have been related to a team issue, her start in place of Bionca Dunham on Sunday seemed purely a calculation based on Michigan’s size inside.

But what once again impresses is how every member of the team is a contributor. Kylee Shook led all rebounders with 10, but Arica Carter was just behind with seven to match the rebounding total of both of Michigan’s bigs. Asia Durr led with 24 points, but had five assists, three steals, and two blocks to go along with them. There were times, including the entire second five minutes of the first quarter, where the Cardinals’ offense sputtered. But in every case the stifling defense prevented Michigan from every having any hope of crawling back into the fight.

But before they fly off to Albany, the seniors shared one final moment on Denny Crum Court. The crowd rose to its feet after the final horn as the Cardinals gathered at mid-court to wave and bask in the adoration. Asia Durr and Arica Carter grinned from ear to ear, and Durr sank to her knees to kiss the Cardinal beneath her feet. A spontaneous victory lap once again elicited a roar from the crowd as the seniors elatedly worked their way around the arena and off the court. This class will be dearly missed.

Asia Durr: “I can’t really put it into words because it’s a feeling that you’ll never forget, and years down the line, you talk to your kids, your grandkids, your friends about these four years, and I mean, it was just so much fun playing here, playing in front of the best fans in the country.”

Amidst the elation, you could see the focus and resolve that has defined this team begin to emerge. The Cardinals are not done yet. A date in Albany, NY with either Gonzaga or Oregon State (Monday, 9:00 p.m. EDT) awaits in the Sweet Sixteen. And beyond that, a likely rematch with Geno’s Huskies.

I asked Asia in the locker room after the game, “It’s easy to say you’re taking it one game at a time, but what are you looking forward to in Albany?” Her response?

Four, “one game at a time(s),” separate them from national glory.