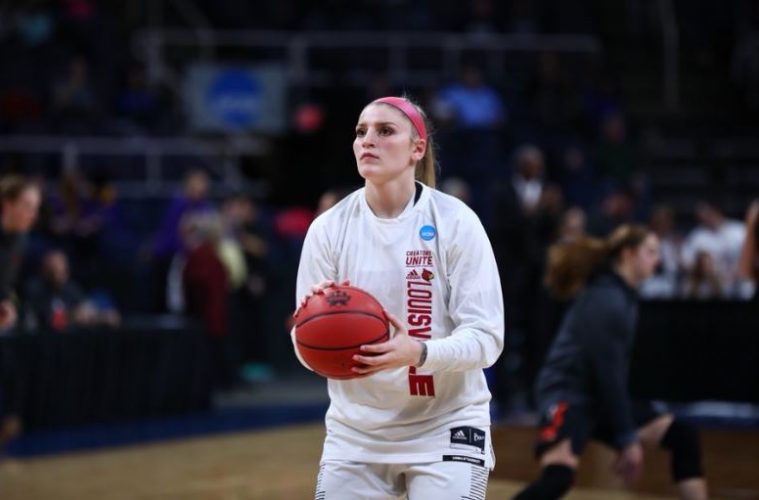 Basketball, at it’s core, is a simple game that’s difficult to play. You put the ball in the basket, and prevent the other team from doing the same. Execution of that concept is where the wheat is separated from the chaff.

And so, when the Oregon State Beavers met the Louisville Cardinals in the Sweet Sixteen, the basic plan seemed to have been to prevent UofL from exercising their three-point shooting capabilities. Lock down the perimeter, and use the size advantage inside to work against the likes of Kylee Shook and Sam Fuehring. Unfortunately for Oregon State, Shook and Fuehring simply said, “Catch me outside, how about that.”

Sam Fuehring had never hit more than a single three-pointer in any game in her entire college career. She hit two in the first quarter alone, and finished with 17 points, 9 rebounds, and 3 three-pointers. And by the way, Fuehring joined the Cardinals 1,000 point club thanks to tonight’s offensive effort. A textbook layup put her over the top, but her shooting from distance did most of the work. Kylee Shook couldn’t let Sam have all the fun and hit a three pointer of her own and at the end of the first quarter the only Cardinals with three-point baskets were the two forwards. From the post-game press conference:

ASIA DURR: “You know, I’m proud of Sam. I’ve said it all year long, like my teammates can score. That goes to show you that’s what they do. I’m very confident in them and very proud of Sam for showing off that threepoint shot.

Arica Carter couldn’t just sit around and watch her taller teammates show her up. Carter had been a bit cold from the field even prior to her knee contusion. In every respect she showed her return to form tonight with a couple of quick threes in the second quarter in what was otherwise a low-scoring segment for both teams. Having Carter at full strength (as she seems to be) will be essential for a deeper run into the tournament.

But credit to the Beavers for putting up a strong defensive effort, as they have done so many times this season. A Louisville team that’s averaging near 80 points per game on 47% shooting was held to 61 on 40% Friday night in Albany. As the Oregon State defense adjusted midway through the first quarter the Cardinals’ offense stagnated despite the unexpected perimeter shooting from Fuehring and Shook. OSU head coach Scott Rueck never found the exact formula to counter the Cards as he rotated from big to small to somewhere in between. Only Durr and Fuehring would reach double digits and share the top scoring bill at 17 with Oregon State’s Mikayla Pivec.

Speaking of Oregon State, if the Beavers’ defense was a tough hill to climb then Louisville’s was Mount Hood. The only time the Beavers had been held to less than 50 points this season was in a 61-44 loss to Stanford on February 8. They’d only been held to under 60 on two other occasions. Prior to tonight, if the Beavers out-rebounded their opponent they were almost guaranteed a win. Despite winning the battle on the glass 41 to 33, the Oregon State effort was rendered inconsequential by way of being held to just 30% from the field. And when the Cardinals offense struggled, they found different ways to create baskets. Dana Evans once again provided the necessary spark off the bench. Louisville readily outdistanced the Beavers in the third quarter thanks to filthy steals and quick points in transition. The Cards would finish with four steals and thirteen fast break points for the game.

Mikayla Pivec put in another shift for the Beavers with 17 points and 9 rebounds (matching her averages) but Louisville seemed content to let her roam while limiting her options. Both Pivec and Destiny Slocum have used their speed and agility to pull defenses out of their schemes and create opportunities for their taller teammates in the paint. Walz’s strategy shut down the passing lanes and the Beavers were limited to just eight assists. A team that has three active scorers averaging double-digits only had one reach that goal tonight. And when the ball did work its way inside to the towering Joanna Grymek, Kylee Shook or Sam Fuehring were waiting. Grymek finished with zero points and three rebounds.

Having bested the Beavers, Louisville advances to the Elite Eight and a showdown with perennial foe UConn. But the mood is different this year, for many reasons. What had been an insurmountable test was proven possible with the Cardinals demolition of the Huskies earlier this year. Exorcising that particular demon now gives confidence to a Louisville team that is also now at full strength and firing on all cylinders.

And despite the distance and obvious catering to a particular audience, Card Nation is ready to rock on Sunday afternoon. Savvy fans were already working their magic, bartering with UConn and Oregon State fans for seats closer to the action. There’s no doubt the Huskies will essentially have home court advantage, but the Fuehring family alone must count for at least five times their actual numbers in terms of volume.

Cardinals and Huskies, Sunday at noon with a trip to Tampa and the Final Four on the line.