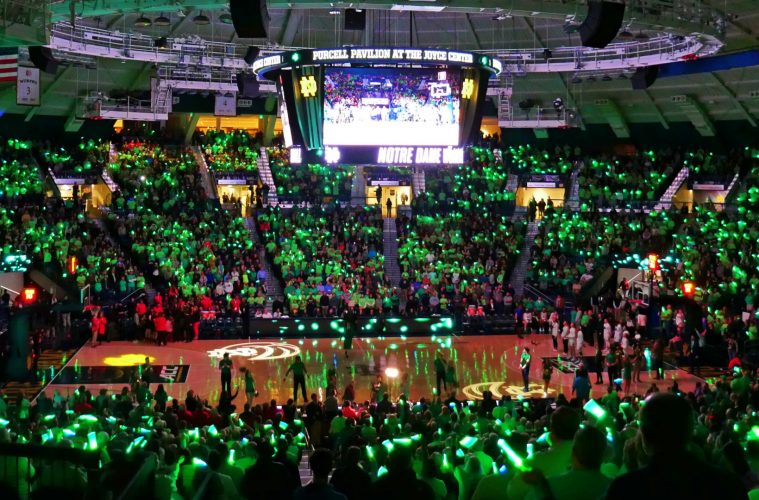 I’ve frequently posted on social media that, in my opinion, the struggles in South Bend are stripping some of the joy away from a potentially devastating win for Louisville women’s basketball at Notre Dame. Inevitably I get a response to the tune of, “Nope, hate ’em. No mercy.” I’ve used that sentiment to describe the UofL-Notre Dame WBB rivalry as somewhat like the UofL-UK rivalry in terms of vitriol. But another similarity could be that even a terrible Irish team will find some way to show up for Thursday’s Green Out at Purcell Pavilion. It would appear that Jeff Walz agrees.

It might be easy to dismiss such words as just that. For Jeff Walz you get the feeling that Muffet McGraw has burned the Cardinals enough times for the caution to be warranted. And yet it’s still difficult to put a positive spin on what’s occurred in South Bend this season.

With all five starts drafted into the WNBA you leave a lot of space to fill, and the Irish have simply not been able to complete the task. The departure of the starting five draftees has been complicated by the transfers of Jordan Nixon and Danielle Patterson. Here’s a breakdown of what was lost:

The loss of Nixon and Patterson to the transfer portal was certainly a blow given the fact that they were primed to step up this season. But luck hasn’t been on the side of the Irish either. McDonald’s All-American Anaya Peoples was on track for a possible ACC Freshman of the Year honor before a torn labrum sidelined her for the season. The sidelining of Abby Prohaska to blood clots came as an additional shock given her key contributions on the defensive side. As such the Irish have only been able to restore about 70% of their lost capacity:

With the loss of Anaya Peoples and her 12 point/8 rebound contribution it’s fallen to fellow freshman Sam Brunelle to step in. Fortunately for Muffet she’s done so with gusto. Brunelle’s 14.1 points per game now lead the team and she’s evolved into a reasonable threat from three point range. Graduate transfer Marta Siezek stepped into the starting point position after Peoples’ departure and while not a potent scoring threat does run the point quite ably.

Fellow grad transfer Destinee Walker out of North Carolina is also finding herself in South Bend after struggles with injury during her undergrad years. Siezek missed her senior year at Stanford while Walker missed her junior and most of her senior seasons with the Tar Heels.

Injuries are no strangers to starting sophomore guard Katyln Gilbert and junior center Mikayla Vaughn as well. Gilbert missed most of last season but has made a strong return so far in this campaign. Vaughn injured her right knee in this year’s season opener but has returned to give the Irish a needed boost in ACC play.

It’s clear that Notre Dame is trying to make much hay out of how much was lost in an attempt to distract from how little has been gained. With a 7-13 record the Irish are poised for their first losing season since 1991-1992. They made the tournament that year, but only by winning the Midwest Collegiate (now Horizon) league title. From Walz’s perspective the Irish will look to use this game against a much hated rival as a pivot point towards greater success.

“It’s a big game tomorrow night. Believe me, I’m worried more about that than I am the national team.”

We can’t imagine why.