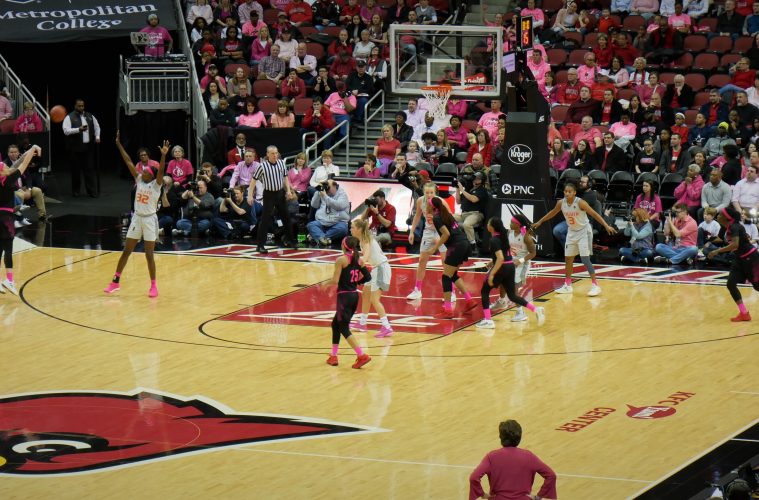 Red gave way to pink on Sunday at the KFC Yum! Center as the annual Play4Kay Pink Game had the Louisville faithful bedecked in various shades of pastel. Confidence for the Cardinals was high as they rode a nine game win streak including a victory over perennial spoilers UConn. But Miami had already proven their credentials with a defeat of Notre Dame just over a week prior. And it would be the Hurricanes who continued their giant-slaying ways with a stunning 79 to 73 upset of the Cardinals in front of 12,000 plus.

Miami’s game plan was a simple one: shut down Asia Durr. Conversely, the Cardinals set out to limit opportunities for the Hurricanes’ post combo of Hof and Mompremier as much as possible. Louisville was generally successful in terms of shutting down the ‘Canes leading scorer and rebounder Mompremier, holding the redshirt junior to eight points and seven rebounds. On the flip side, Miami’s strategy would generally hold during the first half as Asia Durr only manged to find her spark late in the third quarter. But it was Hof who, after scoring a single point in the first quarter, would find the means to rattle off 24 points over the next three quarters as the Hurricanes slowly carved away at an early Louisville lead.

The first quarter found the Cardinals firing on all cylinders and easily finding ways to pick apart Miami’s defense. Bionca Dunham led all scorers after one as Asia Durr and Arica Carter were easily able to penetrate, drawing the Miami defense and leaving Dunham free under the basket for easy layups. The Louisville guards piled on as they fired up attempt after attempt from three-point range, hitting four of nine in the quarter. Miami, on the other hand, could not find an immediate answer for Louisville’s defensive pressure. While going three for four from beyond the arc, the Hurricanes primarily tried to penetrate to the rim or dish the ball to Hof and Mompremier. Yet each attempt found the Cardinals collapsing to double-, or even triple-, team the shooter and as such were able to rattle Miami into turning the ball over repeatedly.

In fact, it looked like the Cardinals were on their way to another night of smooth sailing. There was never any doubt it would be a battle with Miami down low, but Louisville had the clear advantage. Sam Fuehring did pick up two early fouls, but Kylee Shook came off the bench and immediately hit a three pointer (yes, you read that correctly) and followed it up with a monster block in transition. All told, you couldn’t blame the Louisville crowd for thinking things were well in hand.

But a 22-13 Cardinal lead to start the second quarter would slowly and agonizingly be chipped away over the next 30 minutes of play. Where the Hurricanes had been dribbling into traps with no means of escape in the first quarter, they suddenly adjusted to turn the tables on the Cardinals. Hof picked up where Bionca Dunham left off and began scoring as the Miami guards drew Louisville defenders away from the basket providing opportunities for quick layups. Dunham’s 10 point, three rebound first quarter would be followed by two points and five rebounds over the rest of the game. Hof, on the other hand, would follow her one point, one rebound first with 24 points and six rebounds over the final 30 minutes. By the time it was all said and done the Hurricanes had won the battle down low with 30 points in the paint to Louisville’s 18 while owning the glass with 34 rebounds to the Cardinals’ 30.

The only Cardinals that were able to hit the majority of their three point attempts were Dana Evans and, shockingly, Kylee Shook. Shook managed to go four for five from range to net all 12 of her points for the game. She was joined in double figure scoring by three teammates in the persons of Durr, Dunham, and Evans but it simply wasn’t enough to match Hof’s run. An 8-2 run to start the third quarter drew Miami even with Louisville at 39 but the Cardinals would continue to punch back, including two dramatic and consecutive three point baskets from Shook to end the third. But the trend was not in the right direction as the Cardinals’ lead had been cut from nine to four as play began in the fourth quarter.

Asia Durr and Dana Evans would do all they could to keep Louisville in front, combining for four three pointers and 16 points in the fourth quarter alone. But the rest of the Cardinals were quiet, finding little success on forced shots compounded by poor ball handling and failures to box out. What had been a trend became a reality as Hof gave the ‘Canes the lead with 1:30 left in the game after three straight Cardinals turnovers. Down four with 52 seconds left, a segment of the assembled home crowd decided it was time to beat the traffic. Walz and crew were not quite ready to give up, but Miami sealed the deal by hitting 12 of their final 14 free throws to give the Hurricanes the 79 to 73 upset victory.

In the end, Miami was able to outsmart and outplay Louisville after a poor first quarter. All the mistakes that Miami made to start the game would become Louisville’s mistakes throughout the remainder. That’s not to say Miami didn’t try to give it away themselves by continuing to turn the ball over, giving it up 13 times to Louisville’s eight. But, as Katie Meier said in the post-game presser, Emese Hof is simply one of the most intelligent post players in the country. Once settled she was able to partner with her guards to pick apart the Louisville defense for easy opportunities in the paint. Shook and Dunham would do everything they could but could not find the answer. Fuehring found it difficult to contribute due to two early fouls, and couldn’t find her rhythm as the Louisville lead bled away. And while free throws contributed significantly, the Cardinals losing the fourth quarter 32 to 22 simply stings.

As has come to be expected of Jeff Walz, he took the blame for the loss solely on himself while crediting Miami’s strategy and play.

“I’ll take the blame as I always do on losses. We’ll get better…. There’s a lot of games left…we’ve still got a chance at a share of the ACC championship.”

Louisville now falls to 10 and 2 in the conference in a three-way tie with Notre Dame and Miami. Up next for the Cardinals is a trip to Charlottesville, VA for their second match-up with Virginia. But looming on the horizon is a showdown with the presently 12th ranked and dangerous 9-2 Wolfpack of N.C. State. Where Louisville will fall in the in the AP rankings will be seen tomorrow, but in a topsy-turvy world where the top dogs have all suffered it’s likely not something that will concern Jeff Walz.

The ACC women’s basketball tournament is now just over two weeks away, and a mere four regular season games remain. In a fight to the finish, the Cardinals will have to recover quickly. What doesn’t kill you makes you stronger.