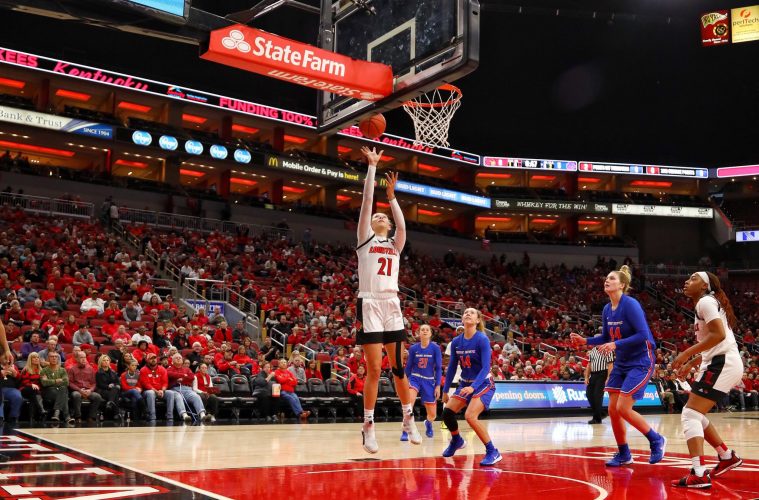 Jeff Walz’ preseason prediction was that it would take at least eight or nine games to get his team from where they were to where he wanted them to be. Sticking to that schedule would mean rolling through #1 Oregon with a bevy of outstanding questions and concerns. In the final of a five game home stretch the Cards wowed the crowd with an ahead of schedule X-Y dominant win over the Boise State Broncos.

In all of the first four games of the season the Cardinals demonstrated a propensity for a slow start followed by an adequate, if not dominant, performance to put away clearly weaker opponents. Coach Walz was quite clear about the danger that Boise State presented but saw the only solution to his team’s offensive woes as gym time. Defensively the Cards had been much more consistent but the Broncos presented a new threat with their three point attack.

Color the crowd shocked when the Cardinals came firing out of the gate with 12 straight points in the paint against a staggered Boise State man defense. Only 6’5″ Mallory McGwire was left to man the interior for the Broncos and the Cardinals quickly attacked the wide open lanes with quick cuts and excellent ball movement. Assists had been a concern for Walz but that didn’t show today with both Dana Evans and Jazmine Jones finding Kylee Shook and Bionca Dunham all alone under the basket for easy buckets.

Boise State wasn’t doing themselves any favors in the first half with 12 turnovers which the Cardinals were happy to convert into 15 points. But it was the lights out offense from the Cardinals that set the pace. 71% shooting and three for five from beyond the arc had three Louisville players in double figures on the strength of 14 assists as the Cards went to the locker room with a 58-34 lead.

As it is said, you live by the sword and you die by the sword. Out of the half the dangerous Broncos offense finally found its groove just as both the Cardinals defense and offense went flat. Sophmore forward Rachel Bowers’ stat line in the first half only showed two personal fouls, but the second half was her time to shine. #25 rattled off 16 points on 8 for 11 shooting and led the charge that had nine Broncos players in the second half scoring column. Despite holding Broncos leading scorer Riley Lupfer to just seven on the night the Cardinals were unable to contain the onslaught. The excellent ball movement and quick cats that had marked the Louisville first half was now the primary weapon of Boise State.

But the Cardinals first half exploits would prove to be enough. Walz did rotate four starters back in as the Broncos closed to within 14 late in fourth quarter, but that’s as close as it would get. Louisville lost the third and fourth quarters by a total of 40-48 but the 58-34 first half proved to be more than enough. As time wound down the crowd begged Walz to give Jessica Laemmle a chance at the stat line but coach called a halt and Jaz Jones dribbled things out for a 98-82 victory.

Jazmine Jones led all scorers with 22 after a very aggressive game that also featured six rebounds and three assists. Dana Evans once again lit up the scoreboard with 20 points and four of five from three point range but also showed marked improvement in ball movement with eight assists. Liz Dixon and Kylee Shook are proving to be quite the one-two punch as they rotate on and off the bench. A combined 30 points and nine rebounds came via a strong first half from Shook followed by Dixon picking up the slack in the second. And depth-wise it’s clear that Jeff Walz has plenty of tools in the tool shed as Norika Konno continues to impress off the bench with excellent court vision and decision making skills that belie her youth.

All that remains is to put together a complete game as the Cards get set to jet down to the Virgin Islands. Boise State is the strongest opponent Louisville has faced to date and spotting them 82 gives plenty of reason for concern. Offensively it appears as if this team has finally taken the lid off things but that will not be enough against the likes of UT-Arlington and Oklahoma State.

And looming ever closer is that showdown with (currently) #1 Oregon. Jeff Walz said he now considers his team at four out of ten on the scale. Here’s hoping he can get that to eleven over the course of a week.