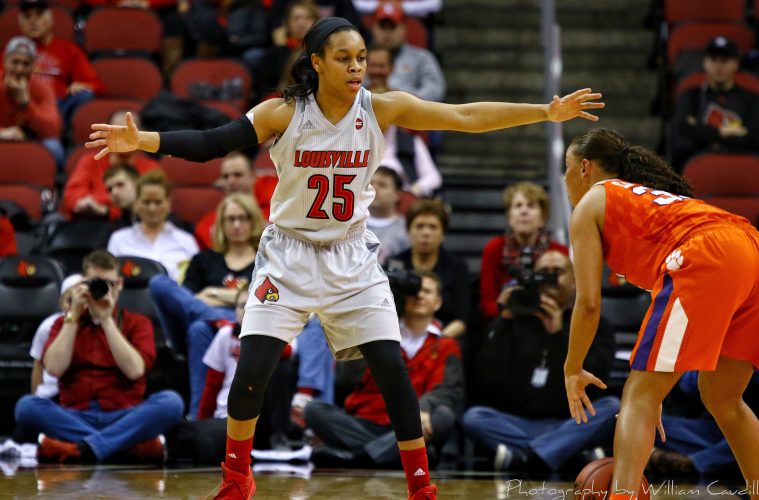 Cardinals Burn Bright In 75-67 Win Over Clemson; Advance To Semifinals

First things first; credit where credit is due. Amanda Butler has done an amazing job at Clemson. Her predecessor Audra Smith won only nine conference games in her five year tenure. Butler matched that total in one year. This is a Clemson team that was picked to finish dead last in the ACC, and came into the ACC tournament as a seven seed with a 9-7 conference record. Jeff Walz prophesied that we’d be seeing the Tigers again in the NCAA tournament. They’ve earned it.

That being said, it was the Cardinals fearful lack of symmetry that nearly earned them an early and shameful exit from the ACC tournament. A strong fourth quarter sparked by Bionca Dunham’s aggressive play on both sides of the ball was enough to get them across the finish line in the lead, but 30 out of 40 minutes had Card Nation on the edge of their seats.

University of Louisville president Neeli Bendapudi and Athletic Director Vince Tyra joined the travelling Cardinals faithful in Greensboro, NC. Bendapudi was on hand to cheer on the Cards as well as present (now) multi-award winning ACC Player of the Year with the award for being named Kay Yow Scholar Athlete of the Year. Durr’s performance on and off the court has earned her deserved praised but, much like her teammates, the first 30 minutes left something to be desired.

Defensively, the Cards looked nothing like the team that’s been holding conference opponents to 54.1 points per game. Simone Westbrook was able to penetrate to the lane at will. She’d finish with 17 points, joined at that total by Aliyah Collier. Collier’s been an amazing source of offense off the Clemson bench, and led the way in the second round OT win against Virginia Tech with 28. Neither had any issue slipping into the paint. And as the Cardinals post players were forced to sneak up to help on defense, the baseline opened up for leading scorer Kobi Thornton to take the dish for an easy layup. At one point, Clemson was shooting 80%. You read that right. Midway through the first quarter all of the Tigers’ points from the field had come from within three feet of the rim.

Offensively the Cards started…let’s just say jittery. That could easily be understood in the context that Clemson was already warmed up from an OT win over Virginia Tech in the second round while Louisville was coming off a week of rest after the demolition of NC State on Senior Night. Quarter one ended with the Cards going 1 for 6 from three-point range and trailing the Tigers 20 to 23.

Fortunately, Dana Evans provided a spark in the second quarter with all seven of her first half points and capped the Cardinals’ resurgence. Louisville’s three-point shooting began to heat up, and the Cardinals would outscore the Tigers 21-12 in the second frame to take a 41-35 lead into the locker room at halftime. For a time, things looked as if the ship had been righted and the Cards were on their way towards cruising in the second half.

But defensive woes returned (or continued), and the Cardinals’ fouls began to mount. Asia Durr picked up her third and spent the last three minutes of Q3 on the bench. Coincidentally, Louisville went cold from the field over the final four minutes of the third quarter. The collective rear-end puckering of the assembled Cardinals fans made a whooshing sound as the air was sucked out of the arena. Or maybe that was one of the propeller fans from the flying shoe. In any case, Louisville found themselves facing a rare deficit going into the fourth quarter down to the Tigers 54-60.

Asia Durr has two settings: stellar and steady. Tonight was a steady night. If her shooting percentage wasn’t great, it was enough. And it was enough to pull the Tigers’ defense on to her, thus creating ample opportunities for Dana Evans and Arica Carter. Asia would finish the night leading all scorers with 24 and a notable 4 assists. Those assists (in part) helped Evans and Carter to 15 and 10 points respectively.

While at times it felt as if the Cardinals were being completely dominated in the middle, they’d eventually come out on top. Louisville had trailed Clemson most of the game in rebounds, second chance points, and points in the paint. They’d finish the game out-rebounding the Tigers 39-35 while matching them in second chance points at 15 and points in the paint at 36. Primary credit goes to another tenacious Sam Fuehring performance that pulled down 14 rebounds, nearly besting the combined total of 16 from the Clemson post players. Although early box-out efforts left a bit to be desired, the Cardinals came on strong and corrected their deficiencies in time to finish strong.

Special credit, however, goes to Bionca Dunham. When the Cardinals needed a fourth quarter spark, she stepped up and delivered. Five of her seven rebounds came in the fourth quarter. Six of her eight points came in the fourth quarter. A smoldering tinder quickly turned into a raging fire that had the Cardinals burning bright. Dunham’s teammates, particularly Jazmine Jones, sensed the heat and started feeding her the ball at every opportunity. Louisville would go on to destroy Clemson in the final frame 21-7.

But the six point deficit to start the quarter meant that, even to the end, the Tigers stood a chance. And thus one of the stranger sequences I’ve ever seen in basketball came about. Somewhere around 30 seconds remained in the game as the Cardinals in-bounded the ball sporting a six point lead. Everyone expected Clemson to foul. But…everybody just kind of stood there, Cardinals and Tigers alike. Except for two people. Jazmine Jones streaked ahead and Dana Evans continued pushing the ball up the court even as the Tigers anticipated a whistle after a half-hearted reach in. But no whistle came, and as 8 of 10 players leisurely strolled around aimlessly, Dana Evans dished it to Jazmine Jones to sink the dagger and make the lead eight.

In the post-game presser, Sam Fuehring said she was confused. In fact, she was so confused she didn’t actually realize how much time was left on the clock. Let’s just say Jeff Walz didn’t feel to squishy inside about that admission.

It took awhile to get there, but the Cardinals did what they had to do at the end. We’re accustomed to seeing them take one or two quarters off in a game for one of Sam Purcell’s smoke breaks, but not three. Pull that stuff in flight school and it’s over friend. Clemson proved that they’ve advanced a long way in a short time under Amanda Butler’s guidance and we’ll likely see them earn a berth in the NCAA tournament.