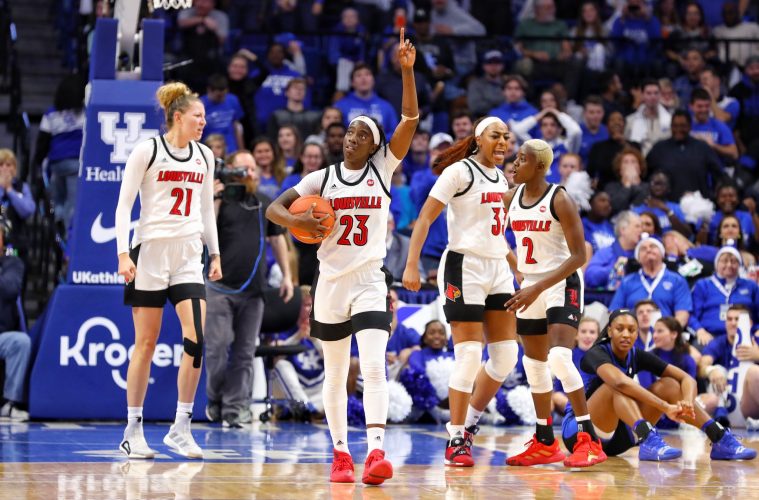 The pucker factor was at 11 and heart rates were soaring at Rupp Arena with about eight seconds to play between Louisville women’s basketball and arch-rival Kentucky. The Cards held on to a tenuous one point lead as a Dana Evans’ missed shot bounced out of bounds. Time seemed to freeze, as did the ten players on the court, before senior Jazmine Jones made a valiant dive to save the ball in-bounds.

The action, like a defibrillator, shocked the Cards and the Cats back to life as UK’s Tatyana Wyatt pushed the ball up the court. Everyone knew who would get the ball, and Rhyne Howard soon faced off with Bionca Dunham for the final shot. The shot went up, Dunham’s hand in Howard’s face, and the ball rimmed out as time expired to hand the Cardinals a 67-66 victory at Rupp Arena.

From Jeff Walz’s perspective, “Rhyne Howard was the best player on the floor tonight…The past few years we’ve had the best player on the floor, in Asia Durr.” Despite UK’s depth this season the scouting report will always center around Howard, and her talents were on display against the Cards. But despite 26 points, her performance was limited to 9 of 23 from the field and was primarily contained to UK’s explosive second quarter.

And the quarter by quarter analysis is the true tale of this rivalry game. The Cardinals offered up a well-rounded first quarter performance for a 21-16 lead at the first break before falling completely flat in the second quarter both defensively and offensively to give the Wildcats a 24-10 second quarter margin and a nine point overall lead at the half.

Consistent inconsistency was perhaps a hallmark of the game, with several notable statistical disparities. The Cards decimated the glass for a dominant 37-17 rebounding performance. Meanwhile, the thoughts of many UofL fans were in a familiar place as the Cats seemed to be unable to commit a foul. In fact, UK wasn’t called for a foul during the entire second quarter and managed to play a full 20 minutes between their last foul in the first quarter and the next one in the third. The Cards would end up being whistled for 19 fouls while the Cats picked up just nine.

Those Cardinals fouls earned the Cats 15 free throw attempts with 12 of those made successfully. But most damaging was UK’s 10 of 19 from three point range compared to UofL’s 5 of 15. “If you had told me before the game started that they’d go 12 of 15 [from the free throw line] and 10 of 19 from three I would’ve told you I wouldn’t have liked the outcome,” said Walz after the game. Five Wildcats would hit it from distance by the end with Haines and Wyatt joining Howard in double figure scoring.

But it was despite the foul and shooting disparity that the Cardinals managed to explode out of the locker room in the third quarter to put themselves firmly in the lead. Give credit to the cool-headed approach of Yacine Diop who provided the spark with an And 1 followed by a three point basket from the corner. Once the fire was lit, the Cards streaked to a 13-0 run to close out the third quarter and never looked back. Diop’s eight points, six rebounds, and two assists may not impress numerically but were critical when it counted.

Evans, Shook, Jones, and Dunham were all double-digit scorers for the Cards but Shook and Evans double-doubles impressed the most. Evans has held true to her commitment to her newly acquired point guard duties. With 18 points and 10 assists it’s safe to say she’s settling into the task quite well. When the hot-handed third quarter devolved to a defensive slug-fest in the fourth it was also Evans who kept her teammates focused and ready to strike.

As a complement to this was Kylee Shook’s workmanlike performance in the post with a few crucial contributions thrown in from the perimeter. Shook’s three second half three pointers kept the fires burning when the Cardinals needed it, and her unwavering dominance in the post contributed not only points but also several crucial defensive stops as the Cards clawed their way back to the lead. Her five blocks now have the senior sitting just one block away from tying the all-time record for career blocks currently held by Angel McCoughtry.

As time expired after the dramatic final 10 seconds the red-clad at Rupp erupted as Jaz Jones danced off the court with L’s firmly up. Walz gave due credit to the senior for her fast-thinking in-bounds save to keep the clock running and UK off balance. Both programs now sit at 10 wins and one loss as they approach conference play. But for Jeff Walz and the seniors this win must feel particularly sweet as the fourth in four years over the Wildcats. Walz’s career record against the Cats now sits at 7-6.

For the Cards it’s on to UT-Martin before returning to the friendly confines of the KFC Yum! Center to open conference play against Syracuse. Looming at the end of winter is the highly probable scenario that the state of Kentucky will have at least two highly-ranked women’s programs making deep runs in the NCAA tournament.