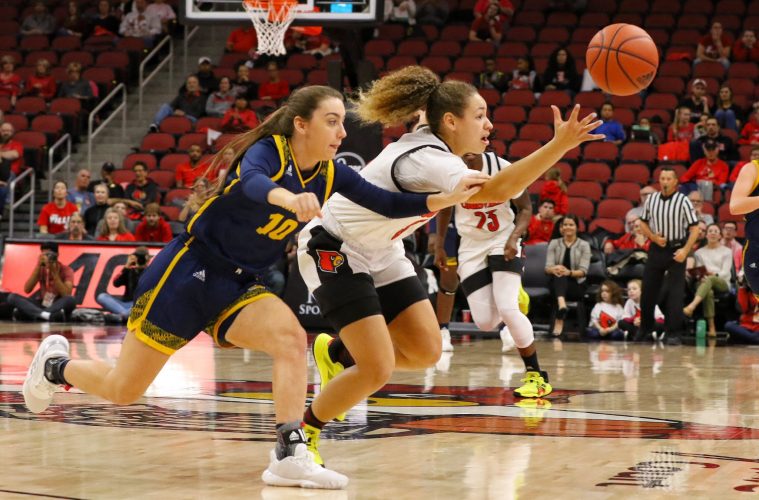 Jeff Walz’s priorities were relatively simple entering the fourth game of the Cardinals five game opening home stretch. Communicate, make good shot selections, and complete shots under the basket. That’s not quite what the Louisville women’s basketball team delivered at the KFC Yum! Center on Thursday night. Walz was at times visibly frustrated with the Cardinals offensive struggles and once again rolled through a series of player combinations in an attempt to find the special formula. But from a win or lose perspective, the secret ingredient was a tissue thin Chattanooga team as the Cardinals romped their way to an 86-37 victory to improve to 4-0.

It was definitely a game where criticism at the microscopic level will be necessary as Walz tries to find every possible lesson for his team before a string of tough match-ups that will be capped by a showdown with Oregon in St. Thomas. Against the Chippewas last Thursday a flat-footed defense had the Cardinals struggling for most of the first half. While the defense was energized this Thursday night it was not accompanied by an equally energetic offense to start.

Louisville managed to make only one of their first twelve field goal attempts and were just four of sixteen at the first timeout. The shots weren’t falling from anywhere but most worryingly were the Cardinals’ continued woes beneath the basket. A string of missed layups in the first quarter was mitigated somewhat by later performance yet the Cards still finished just 19 for 32 in the post.

Despite the Louisville offensive struggles there were no consequences to be found as the Mocs were contending with shooting woes of their own. Coach Burrows’ outmatched team was able to stay in the game early and she expressed thanks to Jeff Walz by saying, “…Lord have mercy, I’m glad you missed so many layups.”

Compounding the issue was the Mocs turnover tendency and the absolute dominance of the glass by the Cardinals. Louisville outrebounded UTC 59-28 with 22 of the Cardinals rebounds coming off the offensive boards. Put succinctly the Mocs were never going to stay in this one and out of the locker room in the second half the Cards quickly put things away.

Dana Evans helped spark an 18-6 run to start the third quarter with back-to-back threes. Evans led the Cardinals with 18 points and went two for five from three point range, but was somewhat critical of herself post game.

“I think it could have been better with getting my teammates shots…I think I’ve got to start creating more for them than me.”

Jeff Walz had an alternative perspective, saying, “She’s still learning how to be a point guard. In high school she had to score…Dana’s a scorer.” Walz was complimentary of Dana’s progress to date, calling out her focus on moving the ball up the court quickly and then move off the ball. With Mykasa Robinson on the court it’s easy to see the plan in action as Evans draws defenders with her shooting ability which in turn creates those sought after opportunities for teammates.

As per Evans’ desire, her teammates found those chances in the second half as the Mocs’ lack of depth quickly turned things into a rout. 51 of the Cardinals 86 points were in the second half and featured heavy contributions from Kylee Shook and Liz Dixon. Walz held true to his words and had Shook in the starting five with Dixon coming off the bench. Kylee was held on the bench for long stretches in the first half but when released in the second saw fit to notch her third straight double-double. It’s not clear what real impact the switch had, but Dixon seemed just as comfortable in the sixth player position.

The depth of this Louisville team was once again on display, with ten players in the scoring column and three in double figures. Joining Evans and Shook was Norika Konno, who spent an impressive 22 minutes on the floor for 11 points, 2 rebounds, and 4 assists. Konno may prove to be another option to spell Evans along with Mykasa Robinson and would be a great extension for the Cards as the season progresses.

It’s back to action on Sunday as Louisville welcomes the Boise State Broncos to the KFC Yum! Center for the final game in this five game opening home stretch. The Broncos are 3-2 and should present a more equal challenge for the Cards before Walz and crew ship off to the Caribbean. Tip-off set for 1:00 p.m.