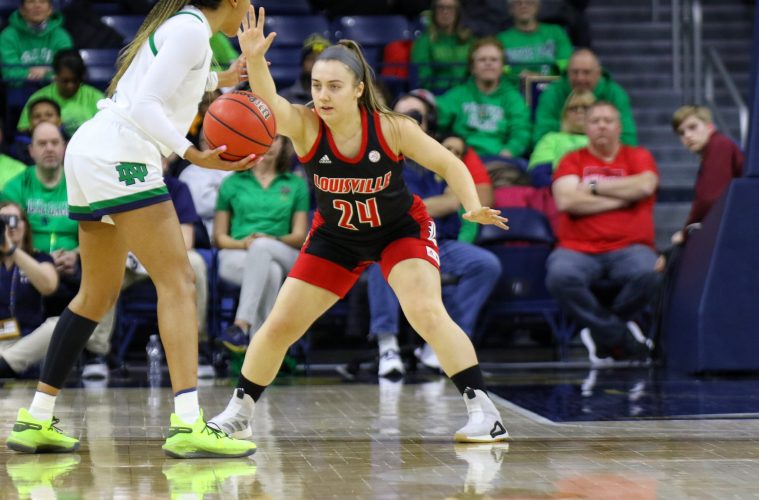 It’s a long drive back to Louisville so I’m going to give you the quick hits while the videos upload.

Muffet McGraw was salty after the Cardinals handed the Irish their worst loss of the season with an 86-54 shellacking in South Bend. Dana Evans and Kylee Shook were the first at the podium, and it was expected for Jeff Walz to follow. Seems that Muffet McGraw was waiting in the hallway for Walz to do his press conference before hers. When Walz didn’t show immediately, McGraw stepped to the podium saying, “I got tired of waiting for him so I guess I’ll go.”

The first quarter was the third time the Cardinals have dropped 27 points on an opponent in a 10 minute span, but it wasn’t the cleanest start. The Cards jumped out on a 9-0 run and just 2:41 into the game McGraw took a timeout. Despite the hot start Jeff Walz wasn’t ready to take chances. The Irish managed a quick 4-0 run in transition and Walz took a timeout to talk over his team’s early penchant for turnovers.

The Irish did manage a reasonably strong second quarter. Freshman star Sam Brunelle has stepped up in Anaya Peoples’ absence and led Notre Dame on several runs on her way to 17 points and 9 rebounds. Sophomore guard Katlyn Gilbert, returned from injury, led all scorers with 18, but she and Brunelle were the only Irish players in double figures.

Last year in South Bend the Cardinals led by three at the half before losing by 14. This year they led by 21 at the half on their way to winning by 32. Despite that strong second quarter from Notre Dame it was clear Jeff Walz was going to get his revenge.

By the midpoint of the third quarter Walz was able to rest his starters. Yacine Diop got 29 quality minutes and was in fact the Cardinals player with the most time on the court. Early jitters settled down and Diop, playing with a fresh Kobe Bryant tattoo, ended up with nine points, nine rebounds, and seven assists with just three turnovers.

Despite only 27 minutes on the court, Dana Evans managed 17 points and six assists in front of a sizable crowd from Gary, IN. Evans is now just 14 points away from joining the 1,000 point club.

Kylee Shook, and indeed the entire team, demonstrated strength in the post with 34 points in the paint and won the battle on the glass 45-32. Shook had a particularly standout moment as she was fed the ball despite being in a triple team and somehow managed to pivot for a reverse lay-in.

Lindsey Duvall got her first points since the Miami game and looked good, with a smooth shooting motion that seemed more confident than it has been. The highlight of bench play, however, was a dribble drive by Yacine Diop into traffic that was intelligently kicked out to Jessica Laemmle to put the senior in the scoring column.

Walz took particular pride in the Cardinals’ inside out game. UofL is starting to look like a March-ready team and it’s likely they could have dropped a century on the Irish had they the will to do so. The Cardinals lost their bye week to the Team USA game but crushing the Irish and allowing the starters to spend the entire fourth quarter on the bench is nearly just as good.