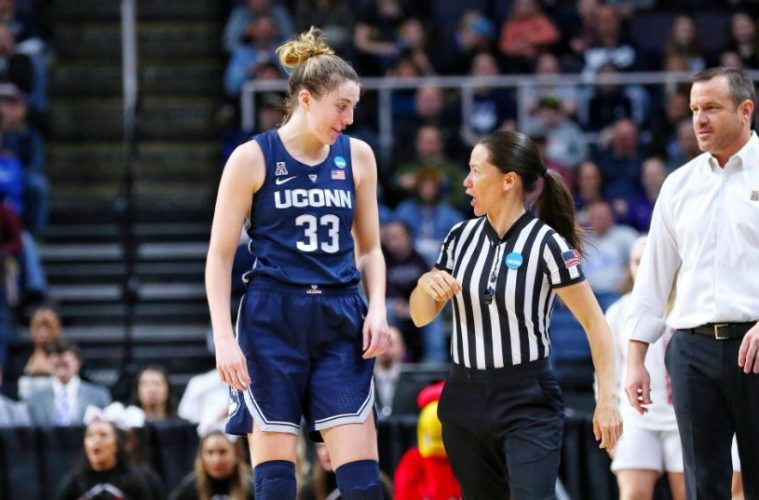 Stop me if you heard this one before. For a considerable stretch of the first half, the only three-point basket scorers for Louisville women’s basketball were Sam Fuehring and Kylee Shook. Asia Durr didn’t score until the first minute of the second quarter and went one for ten in the half. Arica Carter wasn’t far behind at one for five. And in this topsy-turvy world, it only made sense that the leading scorers for the Cards were Fuehring, Shook, and Jones while Durr led all Cardinals rebounders with seven.

Both the Cardinals and the Huskies started cold, and two minutes in it was a fast-paced but zero score affair. But Geno Auriemma had someone pull out the lug wrench and pry the lid of his team’s basket. Suddenly the Huskies were on a streak, and for a time the Cardinals had no answer. Defensively the Cardinals were flat-footed and UConn could not miss, going 9 for 16 from three-point range in the first half alone. Megan Walker was 4 of 5 from range, while Katie Lou Samuelson was 3 for 6.

The Cardinals’ defensive pace picked up late in the second quarter, even if their shooting did not. But credit to Durr and Carter for being the team players they are. Even if they couldn’t score, they fed Shook, Dunham, and Fuehring in low for easy baskets. And all that despite the likes of Napheesa Collier patrolling the interior. At times she would give Dunham and Fuehring fits, including a couple of devastating blocks.

And I have an admission to make. This is where I stopped writing midway through the game. The narrative thread for the first half had been established, i.e. things weren’t looking too good for the Cardinals. I turned to Taylor Durden of WAVE-3 seated next to me and said, “This is the place where I stop writing because these ladies aren’t done. This is the pivot point.”

Thanks in part to 14 for 26 shooting from three-point range the Huskies lead was back to nine with just 1:47 to play in the game. Jeff Walz ordered Bionca Dunham to commit a strategic foul, and the lead was 11. Contemplation of the inevitable became the prevailing mood. UConn. Geno. The Huskies. Those Huskies and their smug surety.

But today was not the day for dreams. Today was the day the winningest senior class in Louisville women’s basketball history was forced to say goodbye. Katie Lou Samuelson, who had been so limited against the Cardinals in January, finished with seven three pointers and 29 points. When she went to the bench with four fouls late in the third quarter, the difference was palpable. The Cardinals’ 6-0 run started the second she went to the bench. But the Huskies were dialed in, and the intensity was too much heat for the Cardinals to bear.

Every UConn starter except Samuelson played all 40 minutes. Every UConn starter finished in double figures. Megan Walker and Napheesa Collier finished with double-doubles. The Huskies were 36.6% from three point range on the season, while Katie Lou was shooting 37.9%. Not today. A team that’s not known for its three point shooting had ten more three pointers than the Cardinals on just four added attempts, and Louisville outpaced a tall Huskies team in the paint by a 14 point margin 34-20. Up is down, black is white.

The Cardinals simply couldn’t catch a break. And when breaks were there for the catching late in the game, they squandered the opportunities. A missed layup, missed free throws, and an inopportune turnover beneath the basket. These are the kinds of mistakes that can be forgiven on a day of better shooting, but that was not today. In the end, this Louisville team gave everything they had, and the effort was worthy. But it was the Huskies’ moment, and such an offensive performance would be difficult if not impossible to counter on any given day.

Not a lot of fun to be the #1 seed in a region where the #2 seed is playing just under two hours from home. Credit to UConn fans for making the drive, as the Times Union Center was loud throughout. But even more credit to the two pockets of Cardinals fans that did everything they could to support these women. Maybe some day, in the far future, the Huskies will not seem to be the beneficiary of so much largesse.

Four months ago, if you had asked me whether I’d be in Albany, NY covering the women’s Sweet Sixteen and Elite Eight, I wouldn’t have believed you. When asked to take this beat, I did so because I love basketball, I love the University of Louisville, and I was happy to help a friend. While a fan of the women’s team, I was nowhere near as dedicated as so many of you that have been with this team for years.

Over the past four months, I have fallen head over heels. Not just with the women’s program, but with these women as individuals. And I’m pretty sure I don’t have to say it, but I’ll say it anyway. This is platonic love, and for someone my age compared to theirs it’s a very brotherly love. They are so deserving of your respect and of your attention, and I will continue to do everything I can to bring their stories to the forefront.

As I walked through the locker room post-game amidst their tears and anguish, and as I fought back tears myself, a single thought crept through my mind. The play never ends. The cast may change, but the show goes on.

If you want to feel what I felt over the past four months, I suggest you get your season tickets now. I’ll see you in November.