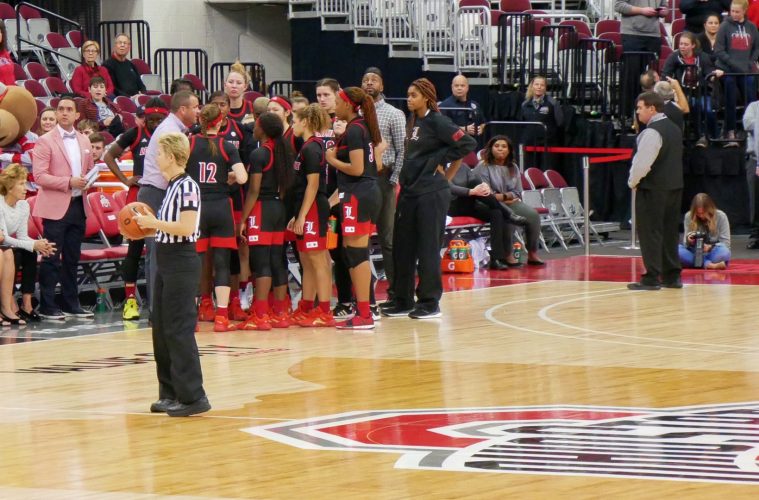 Louisville Cardinals women’s basketball had the momentum heading into Columbus on Thursday night for the Big Ten/ACC Challenge. Soaring above the #1 Ducks in the Paradise Jam had the Cards flying ever so close to the sun at #2. But in Columbus you don’t roast the nuts; the nuts roast you. And so they did as the unranked Ohio State Buckeyes handed Louisville their first loss by a score of 67-60.

It’s natural to assume that perhaps the Cardinals were feeling a bit lofty after knocking off #1 Oregon in the Paradise Jam but Jeff Walz quickly knocked down that idea.

And plenty of credit should go to sophomore forward Dorka Juhasz who led the way for the Buckeyes with 15 points and 7 rebounds. But as Ohio State is more committee than team there’s credit due to all. With just two players (Juhasz and Crooms) averaging double digit scoring the Buckeyes managed to get four players into double figures against the Cardinals.

Ohio State finished shooting 49% from field going 6 of 19 from three point range. But more importantly the Buckeyes were 19 for 23 from the charity stripe. Louisville was frequently stymied off of ball screens leading to mismatches which led to fouls. Jazmine Jones spent the second quarter on the bench and picked up her fifth and final foul with five minutes to play in the game. The Cards had 20 fouls by the time the final horn blew.

On the offensive side Dana Evans once again led the way with 18 points on 6 of 18 and 3 for 7 from three point range. Bionca Dunham led things in the battle for the post with 10 as the second leading scorer. But it was the relative quiet from Shook, Dixon, and Dunham that puzzled Jeff Walz the most.

“We played tonight, unfortunately, like a team that didn’t realize what was working.”

The Cardinals were making headway in the paint against a very physical Ohio State team towards the end of the first half as the Buckeyes switched to man defense. As the Cards headed to the locker room with a two point lead it seemed like good ball movement and passes to the post would be the key.

But it was not to be, and just as maddeningly the Cardinals couldn’t get things going from outside the arc either. Several unforced errors exacerbated the situation, most notably Bionca Dunham’s uncharacteristic technical foul for questioning a foul call early in the fourth quarter. Jeff Walz had some words with the officials as well but seemed satisfied in the end of what in retrospect was an intensely pushy game.

As the clock wound down both teams went nearly ice cold which was greatly to Ohio State’s advantage. The Buckeyes had zero field goals in the final 5:45 but the Cards were just 3 of 13 in the same stretch. Meanwhile the home team managed to seal things with spot on free throw shooting to wrap up a 67-60 upset of the #2 team in the country.

The Cardinals have no time for dalliance on a quick turnaround to Walz’s alma mater Northern Kentucky University on Sunday. No doubt the Norse women will now smell blood in the water against their still highly ranked in-state opponent. Perhaps, however, a loss like this to Ohio State is just the kick in the pants the Cardinals need going into the ACC conference schedule.

As for Walz, it was right back to business. On my way out of the stadium I ran into him and assistant Sam Purcell. He thanked me for covering the game and I told him I appreciated his willingness to give a presser for the small contingent of Louisville media that made the trip. “I know it was a rough night, so thank you,” I said.

“It happens, buddy,” was his succinct response.