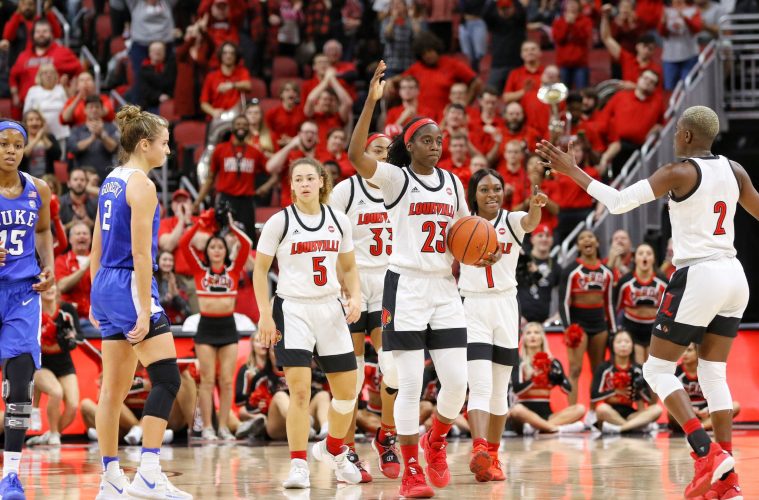 Louisville women’s basketball head coach Jeff Walz is nothing if not known for his patented brand of brutal honesty and humor. When other coaches say things like, “Every game is going to be a battle,” it’s generally easy to write it off as mere coach speak and move on to greater things. But with Walz, you know there’s a gem of truth somewhere in the detritus. With a 60-55 win over Duke at home on Sunday coupled with a 62-58 scrape over Syracuse a week prior, it’s safe to say that Walz’s prediction holds some water.

On paper the Blue Devils, helmed by Joanne McCallie, were not equal to the task of matching up with the #7 Cardinals. Duke is, in almost every respect, the same team that the Cardinals bedeviled in Durham last season but have benefited from players returning from injuries as well as the edition of a high quality freshman. While the contributions from returning players such as Kyra Lambert and Mikayla Boykin are admirable it fell to the veteran Haley Gorecki and newcomer Azana Baines to lead things offensively for Duke.

Gorecki’s 10 first quarter points set the pace that led Duke to a 22-12 advantage after 10 minutes of play. Baines managed four points on two for three from the field with Williams and Odom contributing the remainder as they would through the rest of the game. Duke’s fast-paced transition offense was thriving on Louisville’s first quarter offensive struggles and the Blue Devils found themselves shooting 64% to Louisville’s 36%.

While Duke was running amok, Jazmine Jones was the offensive savior for the struggling Cardinals. At one point the score was Duke 20, Jaz Jones 10. Jones’ 10 points were the only points for the Cards until Mykasa Robinson tossed in a bucket late in the first quarter on her way to six points in 20 minutes of play.

For a time it was Jones’ energy that seemed to be the only life on the court. Against Clemson’s soft zone the Cardinals, especially Dana Evans, had found ample opportunity for shots from the perimeter and mid-range. But the Blue Devils strategy of a wide zone to shut down perimeter shots was well-executed against a Louisville team that seemed to have their feet stuck in the mud. Per Walz, “We have a habit, when somebody else has the ball on our team, to stand and watch.” For at least the first quarter all eyes were on Jazmine Jones, and that extended to defensive play as well.

Like the spark to the tinder, Jones knew she had to keep the energy flowing. “I was just being aggressive like I was the last two games…I knew once our defense amped-up that our offense would take care of itself.”

Jones’ defensive efforts did catch on as the Cards wound the Blue Devils down from 52% shooting overall in the first half to just 35% in the second. Louisville’s aggressive defense led to an inevitably physical game that had Duke coach McCallie puzzled after the final buzzer. Her team would be whistled for 14 fouls in total while the Cardinals accumulated just six, allowing Duke just four free throws total. “Four free throws for that game…wow. That’s a wow…Four out of four. OK? That’s four! That’s not a lot, guys. That game to me…wow, that’s interesting.”

Whether one agrees with the referees or not, the simple truth is that Jaz Jones’ prediction came true. The Louisville defense became increasingly more aggressive through the remaining 30 minutes of play, and that eventually led to multiple Cardinals finding an offensive rhythm at key times. Dana Evans began the game 0 for 10, with the first eight of those shots being missed three pointers. It took until late in the third quarter for Evans to find the basket with a quick fake and dribble-drive for an easy jumper. But Jeff Walz never lost confidence. “She has no idea if she’s one of ten or ten for ten. She was never good at math.” The Cards managed to finally equalize at 39 apiece late in the third quarter, but Evans’ was able to finally find the range for two key three pointers in the fourth quarter to put Louisville ahead.

Eventually the whole gang got in on the action, whether on the ball or off the ball. Good ball movement created ample opportunity and the Cardinals began to pick apart the Blue Devils’ zone. On the defensive side it was pure aggression that shut down Duke’s offense and kept them at bay as the clock dwindled.

But just as Jazmine Jones deserves the credit for keeping the fires burning during the frigid first quarter, she also deserves the accolades for stoking the flames. A 26 point performance set a new career high for the senior, but a brace of free throws in the third quarter were the key points that placed Jones in Louisville’s 1,000-point scorer’s club. In a game that produced a double-double (courtesy of 10 rebounds) and featured defensive highlights (two steals, one block) it’s still the millennium mark that stands out. Per Jaz, she wasn’t even aware of her milestone until being interviewed on the ACC Network after the game. In the presser, she turned to Walz and said, “It only took four years, right Coach?”

Walz, in classic fashion, responded, “And you should thank me for playing you. If I don’t play her, she don’t score!”