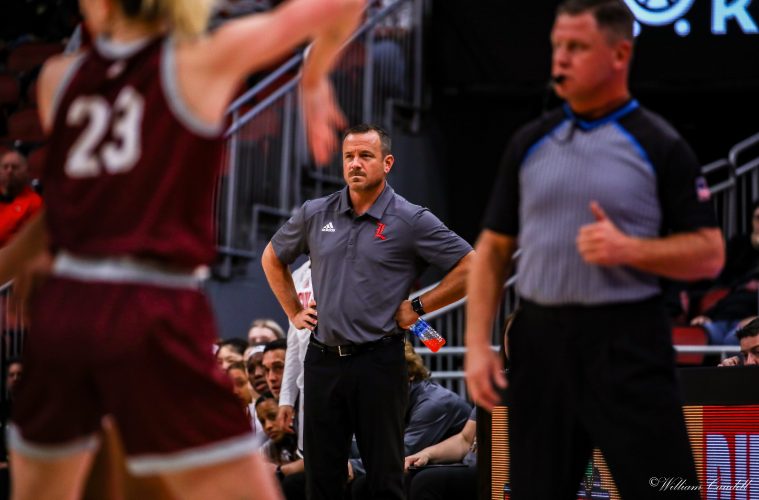 Louisville women’s basketball sailed past Oklahoma State 69-48 in the second game of their three game stretch in the Virgin Islands. The Cards were led by Dana Evans’ career-high 28 points. Louisville will face #1 Oregon on Saturday at 3:15 p.m. in their final game of the Paradise Jam.

Recap courtesy of the University of Louisville:

Dana Evans scored a career-high 28 points and No. 8 Louisville pulled away in the second half to beat Oklahoma State 69-48 on Friday at the Paradise Jam.

Elizabeth Balogun added 12 points and 10 rebounds for the Cardinals (7-0), who overcame their own turnover problems to hand the Cowgirls their second straight loss.

Louisville led from almost the start but had to work to get any real separation from Oklahoma State in the first half, which it led 37-25 at the break.

The Cardinals turned the ball over 12 times in the first two quarters, partially offsetting the Cowgirls’ shooting woes. They shot 24 percent in the half, including just 3 of 14 on 3-pointers.

Still, Oklahoma State was able to stay within six points before Louisville — the last at 23-17 on Abbie Winchester’s jumper with 7:01 left in the second quarter before the Cardinals broke free with a 14-5 run over the next six and a half minutes. Evans’ layup with 40 seconds remaining put Louisville ahead 37-22, its biggest lead of the half.

Louisville extended its lead in the second half, going up 56-32 on Dixon’s layup with 2:05 left in the third quarter. Oklahoma State came no closer than 16 points in the fourth quarter.

Louisville: The Cardinals were tested in their first two Paradise Jam games but face their biggest test Saturday — against No. 1 Oregon to determine the tournament’s Island Division champion.