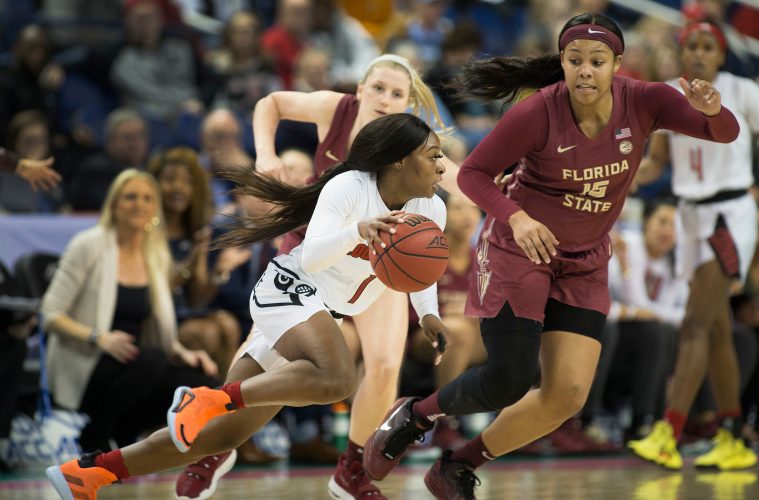 RECAP: Not Meant To Be; WBB Falls To FSU 62-60 In ACC Semifinals

You can’t win ’em all, but some losses hurt a lot more than the others. With Notre Dame’s exit on the first day it was guaranteed that the Irish would not be in the championship game for the first time in seven years. And now the Louisville Cardinals will not show their faces on Sunday in Greensboro for the first time in three years. An opportunity for revenge was squandered as the top-seeded Cardinals fell to the Florida State Seminoles 62-60 in the ACC semifinals.

Without a doubt the game started nothing like Jeff Walz would have hoped. Defensively the Cardinals failed to lock down Florida State’s shooters while offensively nothing would fall.

“It wasn’t a problem of us getting shots. We didn’t make them.”

FSU’s 7-0 run to start the game was part of a first quarter where the Seminoles went 8 of 12 from the field while the Cardinals missed all of their first five attempts. The Cards’ defensive focus on FSU’s top scoring forward Kiah Gillespie was initially fruitless as screens easily freed the Seminoles’ shooters for easy points. Only a brace of three pointers from Kylee Shook was able to keep it close at the first media timeout. Just as quickly a 4-0 run to end the quarter had the Seminoles up 18-10 after ten minutes of play. Walz still had confidence.

“I was really pleased with the way we competed. We just got ourselves a little behind the eight ball there in the first quarter.”

Early in the second quarter the Cardinals were robbed of Shook’s presence both offensively and defensively as she picked up her second foul. Forced to go small, Walz called on Yacine Diop and Mykasa Robinson to pick up the slack. With Robinson running the point it freed up Dana Evans who managed to knock down a three pointer for her first points after starting the game zero for four. Robinson’s feisty attitude nearly led to blows after a fight for a jump ball but the energy from both her and Diop’s tenacity infused the Cardinals with new energy. Jaz Jones never doubted them.

“We knew we had a deep team coming into the year and we knew no matter who Coach took out the game we knew we was adding something to the floor.”

Diop has been crucial all year, serving as a needed spark in several rough moments. On Saturday that fighting spirit collected several key rebounds that helped build momentum in the second quarter. A timely three pointer lifted the offense when it was flagging and took pressure off Dana Evans.

Evans would finish with 16 points and six assists but the first of those points didn’t come until two minutes into the second quarter. Once the dam was broken, Evans found her rhythm. Back-to-back three pointers fueled a 10-0 run for the Cardinals. As time wound down, Evans collected a rebound and turned to push up the court. A shouting Jeff Walz frantically reminded the junior that less then 10 seconds remained. Sprinting into action and like a blur, Evans went coast-to-coast for the lay-in that tied it at 30 going into halftime.

Despite the small, guard-centric lineup that was fueling the Cardinals run there was still the fixture of Bionca Dunham in the post. Despite the early missteps, the senior collected her teammates and demonstrated once again why she is the de facto leader on the court. Her verbal commands and physical guidance put the Louisville defense back on track just as the offense was heating up.

One gnawing factor was the similarity of the ACC semifinal to the Cardinals loss to the Seminoles in February. FSU had once again successfully shut down Louisville’s interior game and forced them into a perimeter attack. That works fine when you’re hitting shots, but the Louisville offense was not firing on all cylinders at all times.

Enter Jaz Jones and a 15 point, 10 rebound double-double. Florida State once again came out hot while the Cards were ice cold. Louisville’s two of eight start in the second half gave FSU a 9-0 run, and things began to look bleak. Jones, however, was having none of it. Fighting for every rebound, driving to the lane without thought of life or limb, the talented senior was ready to do it all. A rebound outlet pass to Robinson turned into a classic two-on-one drill for a Robinson layup. A nasty crossover led to a finger-roll layup to cut the FSU lead to six, and Jeff Walz took a timeout for the opportunity to reset.

The rest, unfortunately, became what could have been. Walz’s disappointment centered primarily on the Cardinals’ inability to win the 50/50 balls on the glass.

“We had our chances…then it was going back and forth. It comes down to, we got some stops but we didn’t get the offensive rebounds we needed.”

The Cardinals were limited to just seven second chance points, losing the rebounding battle 36 to 31. FSU’s Gillespie racked up 15 points and 16 rebounds. Despite Louisville’s small lineup, they showed a lot of fight. Diop, Robinson, and Jones did their best to snatch away whatever rebounds they could but it was simply not enough.

A Louisville 10-0 run had the top seeded Cardinals back on top. With about three minutes to play a three pointer from FSU’s Sammie Puisis robbed that momentum and put the game into its final tug-of-war. Defensive stops by the Cards did not lead to points, and the game began to slip away. The death knell came on a Mykasa Robinson turnover on an in-bounds play with the Cardinals down one. A weak pass squandered open looks for Shook and Evans and the Seminoles scooped it up and forced Yacine Diop to foul.

FSU hit seven of their last eight from the line. The final miss presented one last opportunity for the Cardinals. A timeout advanced the ball but Dana Evans was forced to take the in-bounds pass in the back court. Driving with less than seven seconds to go, her floater rimmed out but found its way into Jazmine Jones’ hands. Leaping, the senior threw up a desperation put-back attempt that also rimmed out, and the Cardinals were denied a chance at the ACC Championship.

Walz was forthright about the outcome.

“This stings, it hurts, nobody likes to lose, and we put a lot of time and effort into this and our goal was to come in here and be not only be conference champs but win the tournament. Unfortunately we came up a little bit short and now we will get prepared for the NCAA tournament.”

The Cardinals now have to sit and watch NC State and Florida State vie for the ACC title. Then comes Selection Monday a week later. Asked about his thoughts on where the Cards would land in the bracket, Jeff Walz responded with his usual wit and candor.

“I know we’ll play our first two at home. And you’ve got to win your first two before you can even worry about what region you’re going to play in.”