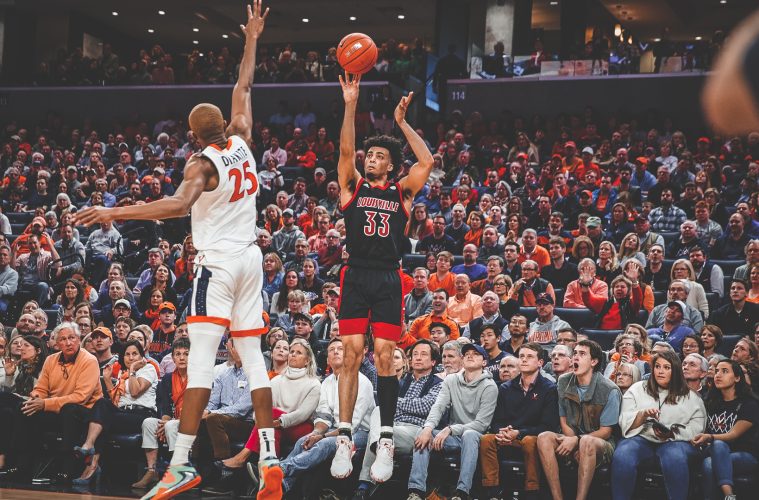 The University of Louisville lost the last game of the 2019-2020 season 57-54 to the Virginia Cavaliers in Charlottesville, VA. It becomes the 3rd consecutive regular season finale loss for the Cards.

The Cards were up 20-13 in the 1st half with 6:58 to play and scored just 4 points to finish the half. Meanwhile Virginia scored 18 and took a 31-24 lead in to halftime. There was an odd technical foul on Chris Mack for arguing a lane violation on a Jay Huff free throw attempt. That techinical gave UVA 2 extra free throws, tied the game and appeared to throw the Cards out of sorts.

From the technical foul at 5:52 in the 1st half Louisville scored just 9 points for the next 11+ minutes of actual game time. The Cards found itself down 43-29 with 13:20 remaining in the game. And that’s really the entire game. Louisville Basketball had an ELEVEN….nearly TWELVE minutes of almost no offensive production.

And then Louisville got itself off the mat and they started scoring and getting stops and with 9:56 to play the lead was just 9. With 7:48 remaining the lead was just 6. It was a one point game with 5:47 to play. This comeback was sparked by a variety of players. Darius Perry getting stops, Jordan Nwora making shots………….. and then it all stopped.

Louisville and Virginia were tied at 51-51 with 5:12 to play and the Cards didn’t score another point until Samuell Williamson drained a three pointer with 0.3 seconds remaining in the game.

Maybe it was Virginia, maybe it was the technical foul, maybe it was just Louisville going through scoring droughts again….. but the Cards took a loss tonight BECAUSE they went long periods of time not playing up to expectations. It’s great that when this team was down 14 that they didn’t lay down. I’m actually very pleased to see that they fought back against one of the most difficult teams to stage a comeback on. But another scoring drought to END the game doomed the final result again.

Overdribbling, a bad block/charge call, a casual out of bounds, strange plays called out of timeouts. That’s not Louisville Basketball. That’s not what this team is capable of.

We’ll see what the final chapter of 2019-2020 will be now that we are moving into the post-season. But as far as the regular season I think the book will have a great number of questions:

Maybe we’ll get some answers at next week’s ACC Tournament and perhaps we’ll have to wait in the NCAA Tournament. But the talent and promise of this team is tantalizing…… the reality of this team leaves something to be desired.