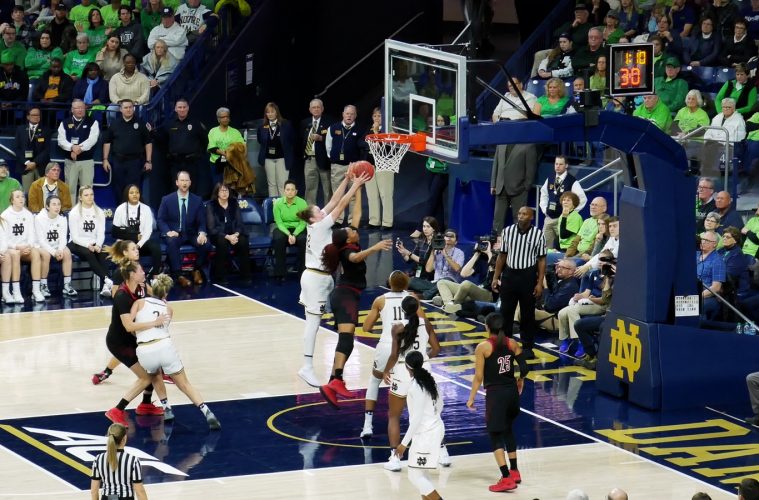 #2 Louisville Fights To End But Falls to #1 Notre Dame

The Red Green Show came to Purcell Pavilion on the campus of Notre Dame University last night, but featured a late substitution. I’m a referee, but I can change, if I have to, I guess, and thus the Zebra Lodge meeting commenced. The Cardinal women had a lot on their hands: contending with fouls, ND’s size in the paint, and a raucous arena filled to the brim with green clad Irish fans. Louisville would fight until the end, but what at times felt like a one versus three battle ended 82-68 in favor of Notre Dame.

The red clad warriors entered a standing room only affair in South Bend but refused to be intimidated even after being confronted with wall-to-wall lime green shirts for the green out night that reminded one of either shag carpet or Kermit the Frog’s regurgitated dinner. After a fan participation green glow stick intro that had this reporter mentally jamming to Orbital tracks, the much awaited showdown between #1 and #2 tipped off in front of a national ESPN audience and attendees alike. Pre-game, both Jeff Walz and Associate Head Coach Stephanie Norman had specified the focus would have to be on aggressive rebounding and perimeter shooting if the Cards were to stand a chance. While rebounding would haunt Louisville at the end, it would be the unknown unknowns that took center stage.

The first half would be dominated by alternating runs, as each team found success both in the paint and in transition. The Cards would go on a 6-0 run, only to be answered by an Irish 8-0 run, with six of the eight coming off fast break layups. But Asia Durr responded with a 6-0 run of her own, and would score 10 of her 29 ultimate points in the first quarter alone. Durr would shoot 48.6% from the field on the night with six rebounds and two assists. Impressively, only three of those points came from beyond the arc, as Asia and the Cards would not back down against the imposing interior patrolled by Notre Dame’s Shepard and Turner. Louisville would score 16 points in the paint to Notre Dame’s 12 in the first half, and this against an Irish squad that averages 52.7 points in the paint per game.

While the Cards found themselves up 35-33 at the half, the aggressive play came at a cost. Sam Fuehring, Jazmine Jones, Asia Durr, and Kylee Shook would all end the half with two fouls, while Arica Carter and Dana Evans would end with three. All told, the Cards would be whistled for 15 fouls in the first half compared to only 6 for the Irish. Notre Dame went 8 for 27 from the field in the half but the difference was easily made up by 17 made out of 23 free throw opportunities. The Cards outplayed Notre Dame on many fronts, notably garnering fifteen points off turnovers and forcing the Irish to give the ball up eleven times while only giving it up twice themselves. A mix of perimeter shooting with aggressive drives to the basket created either layups or kick-out opportunities resulting in stop-and-pop shots from the wing or the key. But, combined with the foul differential, Notre Dame had eleven points from transition layups to Louisville’s four while the oft mentioned focal point of rebounding sat at 29 to 17 in favor of the Irish as second half play began.

While second half whistles were slightly more egalitarian in nature, the damage had been done. Walz summed up his aggressive philosophy in the face of foul trouble at the post-game presser:

You can’t just let somebody drive to the basket and score on you every time…. That’s what I tell them. You’ve got to keep playing.

At the 6:20 mark in the third quarter, all five Cardinals on the court had three fouls. Whether Walz desired it or not it was clear that the Louisville players had, though not completely, dialed back the aggression to some degree. This did not, however, prevent a lengthy review by the officials after a foul committed by Arica Carter (her fourth) brought both her and senior Notre Dame guard Arike Ogunbowale tumbling to the floor beneath the Irish basket. The video review revealed no flagrant behavior on Carter’s part, but also missed some interesting Notre Dame tactics. Ogunbowale would be the only player to finish with 30 points and two kicks to Carter’s face on the night. This sequence was just one of the clear signs that the winds had shifted as Notre Dame would outscore the Cards 24-12 in the third, capped by a devastating three pointer at the horn to make it 57-47.

And yet the Cardinals refused to quit. As fouls mounted, Walz would be forced to call on a freshman averaging only 10.8 minutes per game and 2.1 points. But the young recruit from Ashland, KY would rise to the challenge. Mykasa Robinson would play well on both sides of the ball, taking a crucial charge and scoring all six of her points in the fourth quarter as she contributed to a Cardinal 8-0 run which cut the Irish lead to two with two minutes remaining. On Robinson’s performance, Walz would say:

She’s just been grinding it out every day in practice. We needed her tonight and she performed…. It’s what she does, she makes plays.

But it was not to be. Arike Ogunbowale could not be stopped, ending the evening with 19 of her 30 points in the fourth quarter. Three Cardinals would foul out before the night was over, with the Irish shooting a final tally of 29 for 39 from the charity stripe. And yet it is hard to look past those points of focus so often mentioned in the lead up to the game. Notre Dame out-rebounded the Cards 48-32 and garnered 20 second chance points to Louisville’s five, with the Irish also finding 23 points from fast breaks to the Cardinal’s six. Given the fouls and the rebounding margins, it’s impressive that Walz’s squad was able to keep it as close as they did for as long as they did. But with under a minute to play, Ogunbowale would hit a dagger three to make it 73-66. To add insult to injury, Dunham’s fifth foul would be ruled intentional and unsportsmanlike as would Fuehring’s fourth. Four free throws and possession in both cases sealed the deal, and at last the Cardinals were forced concede.

Walz was conciliatory in the post-game press gaggle, and immediately pointed out that his team would have little rest before a match-up against Georgia Tech at the KFC Yum! Center this Sunday. It seems the focus will remain on competing against a stacked ACC schedule with eyes on March and April prizes. While that may take a bit of the sting out of the lost opportunity in South Bend, it’s likely the Cardinal women will be anticipating another crack at the Irish should that opportunity come in Greensboro this March. One step at a time, but eyes on the horizon.