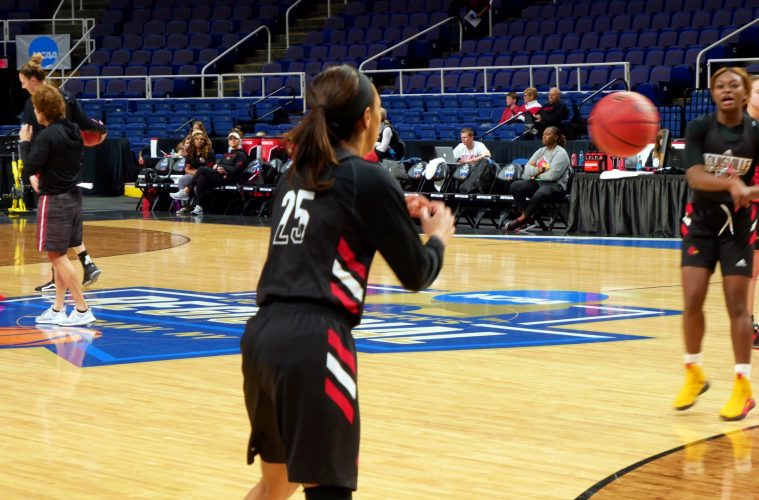 As speculation swirls (once again) around Louisville women’s basketball and specifically their head coach, the Cardinals traveled to Albany, NY for the 2019 NCAA Regional. Louisville earned the trip to the capital of the Empire State with a 71-50 dismantling of the Michigan Wolverines in what had been expected to be a tough match-up for the Cards. On the other side of the country, the Oregon State Beavers (26-7, 14-4 Pac-12) outlasted an injury-depleted Gonzaga squad to punch their ticket to the Hudson Valley and a date with the #1 seeded Cardinals.

You know who else is in this region? UConn. If they weren’t going to get a #1 seed (which they didn’t deserve) then you can be for damn sure they wouldn’t have to travel far from home. The Huskies will face off with UCLA Friday at 7:00 p.m., yet many eyes are already focused on the possibly tasty match-up between UConn and Louisville. But don’t count your eggs before they’re in the pudding.

This will be the fourth-consecutive Sweet Sixteen for the Beavers, and many Cards fans will recall that Louisville ended Oregon State’s run in Lexington last year in the Elite Eight. A tight first half was succeeded by an explosion of offense as the Cardinals easily pulled away in the final 20 minutes. More recently for the Beavers, a disappointing early exit from the Pac-12 tournament was followed by a tight first round overtime win against Boise State and another tight one against Gonzaga to advance to Albany.

If the Beavers are out for revenge, they’ll be doing it without junior guard Kat Tudor who went down with injury relatively early in the season. In her stead, Oregon State has been led by the guard duo of junior Mikayla Pivec and redshirt sophomore Destiny Slocum. Both have started in all 33 games played and are averaging 15.2 and 15.7 points respectively. Pivec is particularly impressive with her energy and off-the-ball movement. She’s also a bit of a jack of all trades: 3.4 assists per game, 9.2 rebounds per game (team leader), with 34 steals and 15 blocks on the season and has notched double-doubles in all of her last four games. And when she shoots, it’s going to go in more than half of the time. Slocum, meanwhile, is the primary engine for the Beavers offense with 4.6 assists per game and is also a reasonably accurate threat from deep range.

Aleah Goodman, however, is the primary three-point shooter for the Beavers and earned Pac-12 Sixth Player of the Year honors for her efforts. Her assists average (2.6 per game) also demonstrates an ability to work the ball around as defenders extend to challenge her shot. Awaiting her pass in the post you would typically find Madison Washington or Taya Corosdale. But the X factor in the Oregon State lineup is easily Joanna Grymek. The 6’8″ Polish senior has only earned eight starting gigs this season, but Jeff Walz has already commented that his starting lineup is highly dependent on Grymek’s status. If Grymek gets the start, it’s highly likely we’d see Kylee Shook in the starting five.

But like the Cardinals, the successes of Oregon State this season have often been built on defensive efforts. The Beavers are one of only four teams in the country in the top 20 for both offensive shooting percentage and shooting defense. That defense will find a tough test against a Cardinals team with the 15th best offense and the 7th best scoring margin in the country. But on paper, the Beavers and the Cardinals seem to have a lot in common. One would be within reason to consider this a match-up between two evenly matched rosters.

Most of the talk this past week has been speculation fueled by rumor with a dash of innuendo, as once again Jeff Walz’s future with Louisville is in question. But talking to the ladies, and seeing the exuberance on their faces, you wouldn’t be able to tell. In the Thursday press conference, Asia Durr had this to say on the matter: “That’s not really a distraction for us. I don’t know why. People ask like why don’t you let it bother you? I’m just like we just don’t. We’re here to play ball. We’re not really worried about what’s on Twitter, Snapchat, all that type of stuff. We’re here to play ball.”

And the Cardinals have definitely shown that they are dialed in after a lights out performance last Sunday against the Wolverines. Looking ahead to Oregon State, the primary observation would be that while the Beavers match-up well with the Cardinals on paper, they’ll always be just a step behind. Louisville’s speed and energy could easily put the Beavers on their heels quickly, and not allow them to settle into a defensive rhythm that has served them well this year. And while Pivec’s contributions are mighty, with Dana Evans and now Mykasa Robinson off the bench it will be easy for Jeff Walz to keep fresh legs on the court to counter Pivec’s movement.

Oh, and there’s also Arica Carter who’s looking and feeling close to 100%. Carter participated in the practice session on Thursday with a bit of stationary bike worked in for good measure. All signs point to the senior guard getting the start on Friday night. And yes, it’s a 9:30 p.m. tip. But one thing the Cardinals have demonstrated this season is the ability to push aside all the uncontrollable factors and simply focus on the game. Here are some quick hits for a Cardinals victory:

It would be easy for these ladies to lose focus given all the talk around town. The focus has been more on Jeff Walz than on another potential run to the Final Four. Meanwhile, the NCAA itself is giving short shrift to the women’s game with some extremely tone deaf social media postings. Despite all that, the Cardinals appear to be focused, dialed in, and ready to go. But that doesn’t mean they can’t have a bit of fun at press conferences.

THE MODERATOR: Any questions for your teammates?

ASIA DURR: I have a joke to tell. Mykasa, my teammate, told me to tell you. What does a blanket falling say?