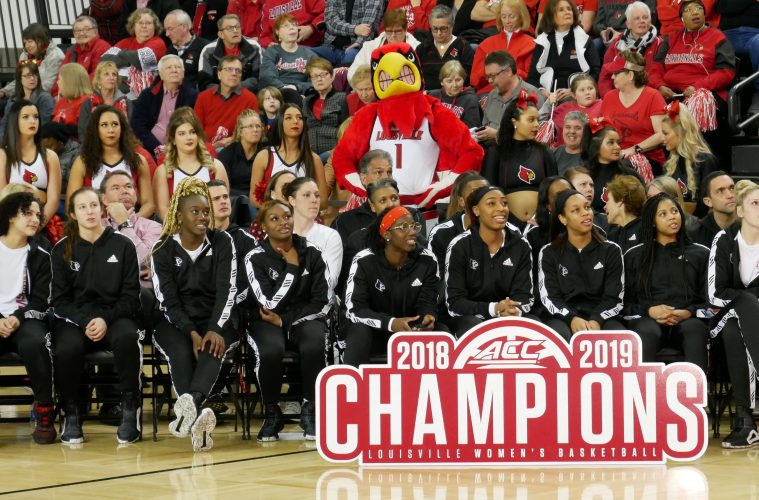 The Louisville women’s basketball team’s run for the 2019 NCAA championship begins Friday afternoon at 12:00 p.m. EDT at the KFC Yum! Center in downtown Louisville. The Cards have earned the #1 seed in the Albany Region and will face the Northeast Conference champion Colonials of Robert Morris.

About Robert Morris (The School, Not The Guy)

The school (named after the guy) is located just down the Ohio River from downtown Pittsburgh, PA. The Colonials (get it?) have competed in the Northeast Conference since 1981, while the RMU women’s basketball team has captured the NEC championship in four of the past six years. A lot of that is thanks to the Buscaglia family. Father Sal resurrected the women’s program from obscurity, and upon retirement passed the reins to his son Chris who has led the Colonials since 2016.

The season started pretty rough for the Colonials, who dropped 8 of their first 11 contests. But they would find their stride upon entering conference play to finish as regular season and tournament champions with a 22-10 record. A lot of that is thanks to NEC Defensive Player of the Year and All-NEC First Team member Nneka Ezeigbo. The 6’2″ junior center leads RMU on both sides of the ball with an average 12.6 points and 7.8 rebounds per game. She’s also in the top eight for the NEC in both steals and blocks.

The Colonials are the kind of team that wears you down with precision and repetition. Freshman Isabella Possett (All-NEC Rookie Team) and sophomore Nina Augustin lead things with assists from the top, and Augustin pairs with sophomore Honoka Ikematsu off the bench as the primary threats from beyond the arc.

But the bread and butter for RMU is the methodical and well-oiled defense, to which everyone is expected to contribute. By holding opponents to 54.8 points per game they rank 13th nationally in scoring defense, while both their turnover margin (4.25) and steals (325) rank 25th in the country. Over the past three years the Colonials are 20-0 when scoring 70 points or more, mostly thanks to their ability to shut down nearly any opponent’s offensive machine.

About Robert Morris (The Guy)

Tom Farmer – The Crunch Zone: “For Sam and Arica, you already know what I’m going to ask, don’t you? Who was Robert Morris, the person?”

The Louisville Cardinals represent the University of Louisville which is located in Louisville, KY, and enter the tournament as…wait…. You already knew that. Sorry, I’ll skip that part.

The ladies are in good spirits, and they’re definitely focused. Losing to Notre Dame in the ACC championship, and getting banged up in the process, has left both figurative and literal marks.

Sam Fuehring says she’s good to go. It was heartening to hear her natural human response to her injuries. Her timidity, the encouragement of her coaches and trainers, and ultimately the restoration of confidence based on trust. It feels like Sam will be fully charged and ready to rumble.

Arica Carter was suited up for practice, but didn’t participate in drills. That’s a bit disconcerting, but one could also understand the desire to allow a bruised area as much time as possible to heal. All signs point to the Cardinals second-leading three point shooter being set to rejoin the starting five on Friday afternoon. One last trip to the doctor and she should be cleared for play.

From the team perspective, the Louisville women will be without their captain against Robert Morris. Jeff Walz’s…disagreements with certain aspects of officiating have earned him a one-game NCAA suspension. But the Cardinals aren’t worried. Stephanie Norman’s been with Jeff for 12 years. The Cards have already played a game this year with Norman in the pilot’s chair as preparation for this very scenario. This isn’t at all a surprise, considering the fact that it’s been a known fact for nearly a year. The greatest mystery at this point is where Jeff Walz will be during the game. If you hear, let us know.

So, bottom line, Louisville has the size and the talent to outmatch Robert Morris on just about any day of the week. But as the ladies practiced on Thursday afternoon I heard a particular repeated phrase.

“It’s March and we’ve got the madness!” It is March, and it is madness, and anything can happen. Odds are, the Cardinals are ready for the challenge.