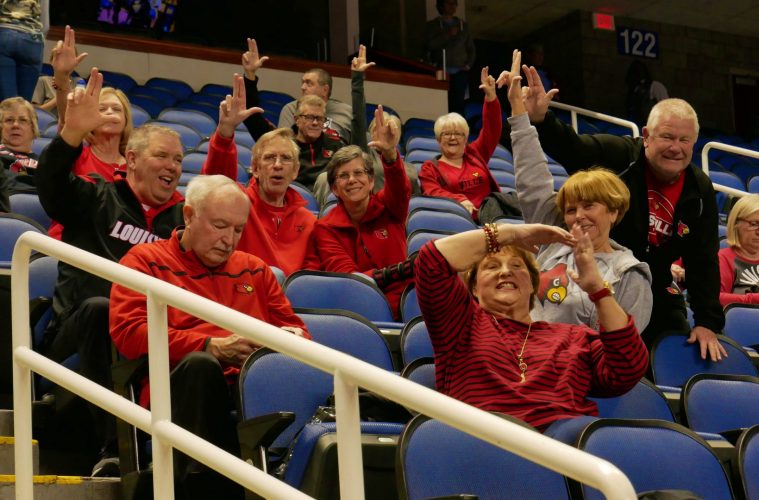 You win the ACC regular season title outright. Your leading scorer wins ACC Player of the Year and your top rebounder/blocker wins ACC Defensive Player of the Year. You’re on a six game winning streak after two straight losses. How does the universe choose to reward you? By drawing the two teams you lost to during the regular season into your ACC tournament bracket. First up, Syracuse in the quarterfinals.

Yes, the top-seeded and fourth-ranked Louisville Cardinals lost to Florida State and Syracuse back in February. This, however, is both literally and figurately not the same Louisville team that dropped two straight a month ago.

As for the opponent, a topsy-turvy season has landed the Orange in a rubber match with the Cardinals. With a frenetic and often ugly 67-50 victory over Virginia on Thursday the Orange advanced to the quarterfinals and a showdown with the top team in the ACC. When asked about whether the return of Elizabeth Balogun has influenced his game plan, Syracuse coach Quentin Hillsman was frank with his assessment.

“She is a good player. We know that. I don’t know how much it changes our scout [but] we’ve got to play with great effort and energy.”

‘Cuse’s win over the Cavaliers did not feature Teisha Hyman. The freshman guard recently announced her season had come to an end after an injury to her right knee and her two-way play will certainly be missed. Against Louisville in February her offensive stat line was not overly impressive but in 32 minutes she presented a stout defense that effectively stymied the Cards’ interior play.

In Thursday’s win over Virginia the injury bug struck again. Sophomore swingman Emily Engstler was hot from three point range before rolling her ankle late in the game. She did not return and now the question is open as to whether she’ll be available Friday vs. Louisville. Her absence will push Hillsman towards a smaller, guard-centric lineup and reliance on the promising (but unpolished) redshirt sophomore Maeva Djaldi-Tabdi.

Besides a depleted bench it seems as if the manic Orange (note to self: good band name) are on the downward swing. Against Virginia the victory was as much the fault of the Cavaliers’ turnovers as it was the Syracuse defense. Despite their considerable size advantage the Orange allowed themselves to be out-rebounded 44-32. That deficit was rectified thanks primarily to 30 points for ‘Cuse off of the Cavs’ 26 turnovers.

And now the Orange face a near 100% Louisville team. At practice on the campus of UNC-Greensboro the Cards had every player dressed and on the court. Yes, everyone. When we put the question to Walz regarding the health of specifically Balogun and Evans, his response was clear.

Besides the return of Balogun and the restored health of both she and Evans there are still a number of things about this team that have changed in just a month. Mykasa Robinson has established herself as a go-to, ready to adopt Evans’ former mantle of Sixth Player of the Year. Yacine Diop has developed her ball handling to the point that she too is a formidable threat on offense as well as defense. And Kylee Shook has developed the kind of confidence that makes the the going away top blocker in the ACC, and one of the best in the country.

On Thursday, Syracuse did not look like the team that was able to beat both Florida State and Louisville earlier this year. Over the past six games, the Louisville Cardinals have not looked anything like the team that dropped two straight in February. Even Hillsman agreed with that assessment.

“Obviously [Louisville] is a very good basketball team. They’re a top-5 team in the country and they got a good chance to win a National Championship.”

But it’s all just words until the ball is tipped, and first things first. The quest for an ACC championship renews Friday at 2:00 p.m.