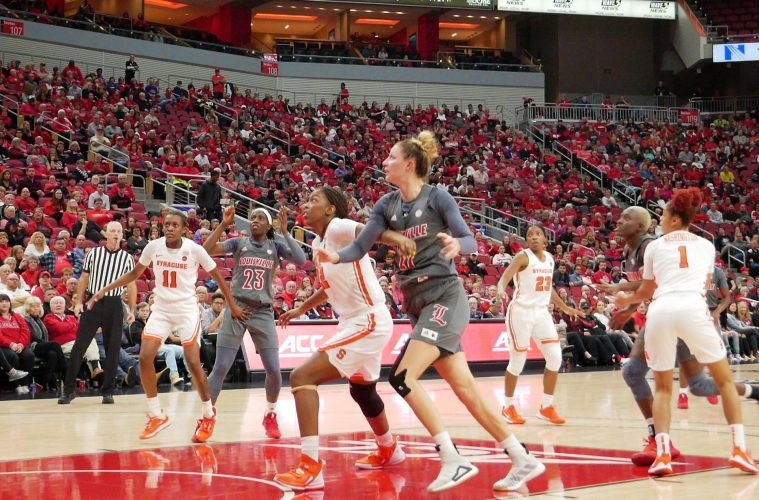 RECAP: Cardinals Squeeze One Out Vs. Syracuse 62-58

When Cardinals women’s basketball last took the court it was against a figurative cupcake that had never defeated a ranked opponent in its program history. Two overtimes later the Cards had escaped Martin, TN with a palpitation inducing victory and set off to fly home for the holidays. The big question was, of course, what kind of team we’d see after the break when Louisville opened conference play against Syracuse. With a 62-58 victory over the Orange on Sunday the Cards answered that question in a generally satisfying manner while opening some new lines of inquiry.

Syracuse entered the KFC Yum! Center with a 6-5 record that could easily have ranged anywhere from there to 9-2 depending on the breaks. The Orange had already faced five ranked opponents, including Oregon, before stepping in to tussle with the seventh-ranked Cardinals and despite going one for four in those five games the Orange had demonstrated many dangerous qualities. When asked about his team’s schedule with four straight games against Top 25 teams (Louisville being third of four) Coach Quentin Hillsman laconically responded, “So you’re saying I’m just a glutton for punishment?”

But on Sunday’s occasion the Orange very nearly demonstrated their equal ability to met out punishing losses. A Louisville team that looked relaxed, refreshed, and refocused still came out of the gate with a sputtering offense that would dog them throughout the afternoon. Syracuse on the other hand managed to come out hot. Well known for tossing up three point shots at any given opportunity, the Orange were managing to connect more frequently than on average.

The bright spot for the Cardinals throughout the day was none other than Jazmine Jones. The senior guard had four previous 20+ point performances this season before notching her fifth on Sunday thanks to a 24 point performance on 8 for 12 shooting. But something about this game seemed different, as if Jones had grown exponentially during the holiday break. When asked what had driven her, Jones credited Coach Stephanie Norman’s scouting report. “She was telling us all through practice, the pull up is going to be there in the ACC area,” referring to the ACC logo at the top of the paint.

Jones’ shot chart for the afternoon is proof enough. Of 12 shot attempts, 9 were made within three feet of the white ACC logo prominently contrasting within the red paint. Three of her four misses came from long range attempts on the left wing with only one of two three point attempts connecting. But as much as Jaz’s performance was thrilling it also served to sharpen the focus on her teammates’ shooting woes.

Dana Evans managed to go zero for eight before notching her first field goal early in the third quarter. She was joined by Kylee Shook and Bionca Dunham who also managed to delay their scoring runs until the second half. Shook’s opening points came on an open three pointer that got the Yum! Center crowd wild while also drawing a line under Jeff Walz’s bullish assessment of his team’s performance.

Syracuse’s defense was effective on Sunday and even so in the full court press against a notoriously transition-focused Louisville team. Walz was quick to give credit to Hillsman and Syracuse’s ability to transition defensive styles quickly and adjust, and that assuredly deserves credit given the Cardinals’ 35% shooting performance. But the Orange defense was quite stubbornly focused on staying strong in the low post, which is what directly led to Coach Norman’s scouting report and Jaz Jones’ mid-range fiesta. The downside to that, of course, is a lackluster day for Kylee Shook, Liz Dixon, and Bionca Dunham. Indeed, the Orange manged to out-rebound the Cards 43-37 as well. But it’s what the Cards did manage to accomplish that stood out to Walz.

Breaking it down, the Cardinals defense was solid throughout and included some late game heroics that guaranteed the 62-58 win. Most notable was the turnover ratio of 17 Orange TOs to just 5 for the Cardinals. Ball handling like that is the kind of thing that can take you deep in a tournament run. But it’s especially satisfying to see the Cards maintain their poise and execute their game plan with precision. Despite the low post difficulties the Orange lost the points in the paint battle 18 to 24 thanks to Jazmine Jones’ faithful execution of the scouting plan.

There were some late game pucker moments as Jaz left the court with a nasty cramp, but the quick action of the training and medical staff had her back on the court to finish things out. The best guess as to the cause is simply that Jaz had worked so hard for 35 minutes that she simply ran out of gas and needed a soldier’s dose of liquids and electrolytes. But it was much to everyone’s relief when she checked back in to help the Cardinals close things out.

There are lots of good takeaways from the Cardinals first ACC win of the season that leave plenty of room for questions. Jeff Walz commented on how he assured his team that every conference game this season would be a battle. With a 62-58 win over Syracuse, the Cardinals appear to be battle ready.