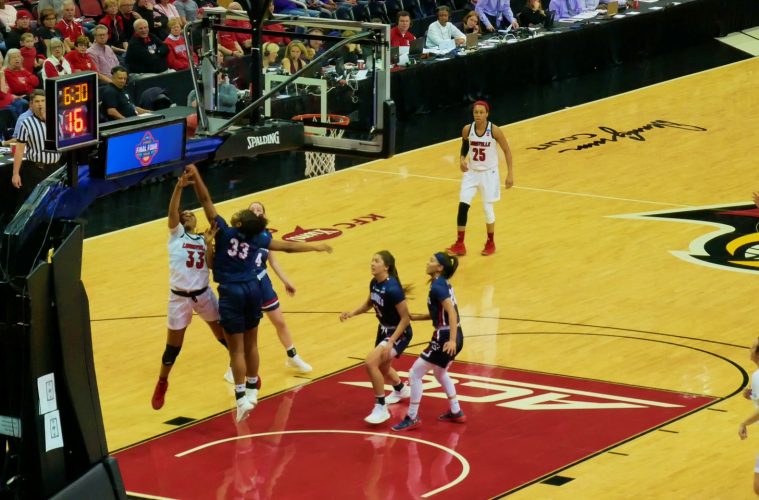 Credit to the Robert Morris Colonials pep band and cheer squad, as their enthusiasm never waned. Robert Morris himself (in mascot form) was treating every made RMU basket as if it was a barrage from the cannons of Henry Knox himself.

But this one was not meant to be. In every aspect of the game, the Louisville Cardinals would prove superior to the sixteenth-seeded Colonials. A fast start set the tone, and Louisville would never look back as they advanced to the NCAA second round with a 69-34 victory.

Despite being a dynamic and deep team, it’s always a bit disconcerting when the Louisville routine is disrupted. And disrupted it was on Friday afternoon. Jeff Walz sidelined with a suspension, and at the Sidebar no less. The Cardinals head coach served his penance at the bar just across the street from the KFC Yum! Center with fellow Louisville icon Scotty Davenport. Associate head coach Stephanie Norman therefore took the helm of a team once again minus a starter. Arica Carter was dressed and available, but if she wasn’t needed then the staff was more than content to give her bruised knee another couple days of rest. Fortunately, the outcome was never in question.

Additionally, Bionca Dunham was replaced in the lineup by the equally capable Kylee Shook. Shook’s game has improved throughout the season and it wouldn’t be surprising if she’d earned a starting gig. But in this case the reasons for the change are not known.

As for the Colonials, try as they might, it made no difference when stacked against a team as powerful as the Cardinals. Standout center Nneka Ezeigbo contributed with nine points and nine rebounds, while freshman Natalie Villaflor had a season high 13 points to lead the Colonials. But the Cardinals defense was stifling in every regard. RMU scored four points to begin the game, and wouldn’t be able to score again for 15 minutes. When they finally did get another basket late in the second quarter, the assembled crowd couldn’t help but give them an encouraging cheer.

There would be moments late in the second quarter and early in the third where the RMU offense found a bit of rhythm. But throughout the day Coach Norman was rotating through a variety of lineups that weren’t quite accustomed to playing with one another. Whether it was to save their legs, or to grant additional experience to the younger players, it did have a minor impact as the Colonials went on a couple of mini-runs. Midway through the third quarter, Norman felt the need to put it away and subbed in most of her starters. Once the lead had reached 20 it never dropped below that margin, and as Louisville pushed it to 40 the gathered Cardinals fans started to creep towards the exits.

It is tough to garner a lot from a game like this. When your team’s top player and center is an inch to two inches shorter than the opponent’s forwards it’s not going to be a great day. Robert Morris and Coach Buscaglia deserve high praise for not quitting when the chips were down. He and his father have raised the Colonials from near obscurity to a consistent Northeast Conference presence. But regardless, the Cardinals proved once again that they are a force to be reckoned with. Some highlights:

Sam Fuehring is better than 100%. After getting seriously banged up against Notre Dame, the senior forward did a lot of rehab and had limited reps in practice. Before the game she talked about the necessity to restore her own confidence and trust in the fact that her ankle would be good to go. She showed no timidity on Friday afternoon as she earned her seventh double-double on 19 points and 11 rebounds.

Arica Carter told us in the locker room post-game that she should be good to go for the Sunday match-up with either Michigan or Kansas State. It’s tough to blame the coaching staff for wanting to give that knee an extra day of rest.

Mykasa Robinson and Dana Evans are quite the duo. The freshman Robinson replaced Arica Carter in the starting five, while Evans once again came off the bench with gusto. Robinson’s stat line may not stand out to most (two points, three rebounds and three assists) but to the educated it’s clear how the dynamic of the game changes with her in the lineup. As for Evans, another impressive day with 13 points, 6 rebounds, and 5 assists.

Defense wins games, and blocks win cheers. Jazmine Jones had three on the day while Sam Fuehring had two. The interior defense from the Cardinals has proven time and again to be a deciding factor in tough games. It’s good to see that, even on a day like today, Louisville tends to keep their foot on the gas.

Asia Durr is Asia Durr. 19 points to join Fuehring as the top scorer(s), and a block of her own.

At press time, Michigan leads Kansas State in the #8/#9 game by a score of 22-14. The winner will face a Cardinals team that seems to be in fine post-season form on Sunday afternoon at the KFC Yum! Center.

What remains to be seen is how much of the Louisville fan base will turn out to cheer on one of the best basketball teams in the country.