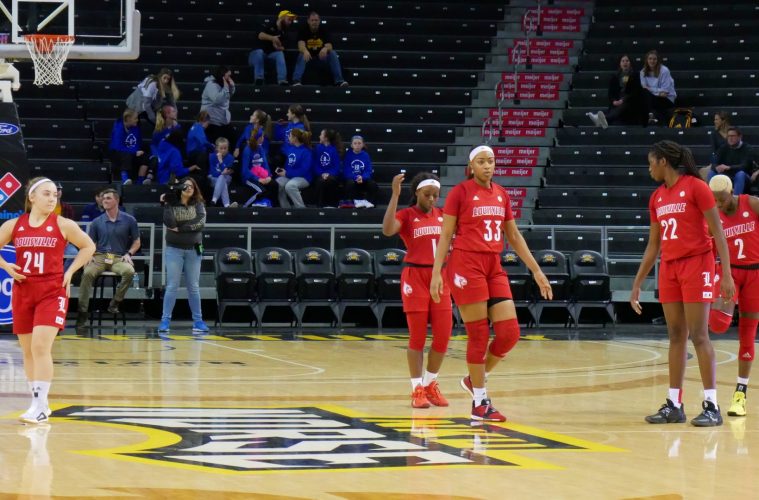 Sometimes a coach needs to prove a point, and Jeff Walz had a ripe opportunity for doing just that at his alma mater NKU on Sunday afternoon. When the unusual starting five of Laemmle, Evans, Diop, Dunham, and Dixon stepped out for the jump ball it was clear that a few lessons were slated for the Cards. And despite being a bit tardy it would appear the lessons were learned as a strong second half handed the Cardinals an 87-54 win over the Northern Kentucky Norse.

When asked about the unique starting lineup Walz said, “I said whoever can do [the offense] right can start. And we went through several before we ended up with our group we had today.” The first half for the Cardinals did possess the air of a walk-through and/or scrimmage as Walz directed his offense in a methodical fashion. With NKU set up in zone the game was simple; get the ball to the middle and score. For a time the Cards offense was hit and miss, with emphasis on the miss. 10 of 17 on layups is not a recipe for success and you could begin to hear the murmurs from the sizable travelling contingent of Louisville fans.

The Norse meanwhile were playing like a team that knew what was at stake. An opportunity for a Horizon League team to take down a top 10 team in front of the home crowd doesn’t come along very often. Defensively the Norse were solid despite the clear size disparity. Offensively NKU manged to employ copious amounts of backdoor cuts for leading scorer Molly Glick and her fellow guards.

Early on the Cardinals trailed 7-1. While Walz was willing to let things develop he’d seen enough with two minutes left in the first quarter and the now typical starting five took to the court. Jaz was asked post-game if coming off the bench motivated her but Walz quickly cut in to say, “She was just on the bench because I was afraid she’d foul in warm-ups…I’ll let you sit here so at least I know you won’t foul.” But even with the first line in the game the Norse refused to quit and a small run drew them to within two at the half.

Jaz laughed when asked about what Jeff Walz had to say at halftime, but whatever was said seems to have done the trick. Jones came out of the locker room with the hot hand on her way to 21 points on 9 of 10 from the field. The one miss was a poorly chosen shot that her coach was very quick to point out after the game.

Elizabeth Balogun also had a strong second half on both sides of the court with the Cards clearly beginning to gel. Her 12 points (plus 3 assists and 3 steals) joined Dana Evans’ 16 points to round out the Cardinals double-digit scorers. When Molly Lockhart hit her first basket of the season late in the fourth quarter it put every Louisville player who saw the court in the scoring column.

But as has been the key so many times in the past it was the Cardinals’ defensive effort that set the stage for the runaway. Closing down the lanes that had been wide open in the first half forced the Norse out to the perimeter where they did have some success, going 9 of 23. The NKU guards Glick, Garcia, and Niece would finish with 13, 13, and 12 points respectively. Limiting opportunities for the Norse was coupled with a dominant performance on the glass that created ample opportunity for transition points which the Cards were quick to exploit. By the end of the third quarter the lead had jumped from two to 24 and the Cards never looked back.

Despite the slow start it was good to see the Cardinals looking like the team they can be as opposed to the team we saw at Ohio State. Fortunately they did not need Norika Konno who was sidelined with a minor knee sprain. Walz says the decision was made to do a small procedure to relieve pain so Konno could be ready for UK next Sunday.

We’ll just have to see who was able to run the offense in practice this week when the Cards tip-off against the Cats.