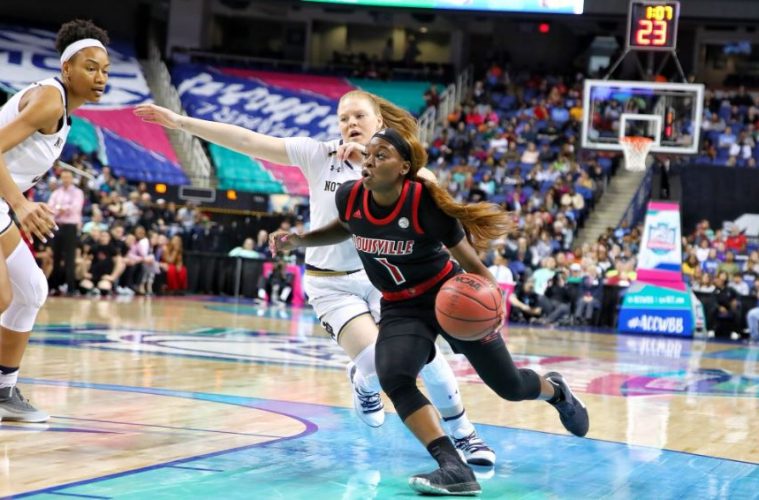 Depleted Then Defeated; Cardinals Fall To Irish 79-99 In ACC Championship

Fuehring starting the game with a hairline fracture of the nose picked up in the semifinal against NC State. Arica Carter benched with a banged up knee. And that’s just where the trouble began.

The Cardinals faced off with perrenial rival Notre Dame on Sunday for the ACC Championship in a match-up that will likely determine the owner of the top seed in the NCAA Chicago region. They also faced off against an officiating crew that seemed willing to let them play despite further or near injury. The physicality of the Irish combined with a permissive lack of whistles proved to be too much, as Notre Dame re-claimed the ACC title with a score of 99-79.

Last time out against the Irish in South Bend the Cards struggled to find a way to box out and shut down the lane as Notre Dame completely dominated the inside game. Sunday would prove to be a repeat of that frustration, but mightily amplified. The Irish began the game much the same way as the Tigers and the Wolfpack had in the quarter and semifinals, namely penetrating to the basket at will. The difference was that, in those games, the Louisville defense stiffened just as their offensive accuracy improved. Sunday, the Cardinals never had a chance to establish that rhythm.

It was somewhat painful to watch as Sam Fuehring’s usual intense demeanor gradually turned to frustration. Despite the effort, both Fuehring and Bionca Dunham couldn’t do much to stop the onslaught from 6’4″ senior forward Jessica Shepard. She’d finish with 30 points and 13 rebounds but wasn’t the only threat faced in the paint. Junior guard Jackie Young used speed and agility to work her way inside for a double-double of her own with 10 rebounds and 21 points. Jeff Walz had something to say about it as well, as Fuehring stepped onto the court after a mid-first quarter timeout but was testily waved back to the bench in favor of Kylee Shook.

And then, midway through the second quarter, Fuehring went down after a push that forced her to plant hard on her right foot. That foot slipped out from beneath her and she crashed to the deck face first, alarming many who thought she might have exacerbated her nose injury. But the focus of trainer Keressa Ackles went immediately to her right ankle. Helped off the court, she’d return from the locker room in the second half only to be pulled again after a near repeat of the earlier tumble.

Fuehring’s intensity in the middle was missed, but that was only one very small factor in what turned into a rout by the start of the fourth quarter. The Irish pushed and pushed, both literally and figuratively, with seeming impunity. Asia Durr went down twice after contact driving to the basket with no whistle. Dana Evans was hip-checked in transition with no call. Notre Dame exploited that for a fast break layup that was cleanly blocked by Jazmine Jones yet drew a whistle. The foul totals ended up fairly even, but the fouls that were not called had far more of an impact.

And if it wasn’t one thing, it was the other. 16 turnovers from a normally steady ball-handling team. 2 for 18 from three point range. Rotating through post players either for injury or foul trouble. Each time the Cardinals mounted a run, something would happen to disrupt the rhythm. All too often that was a whistle. Asia Durr summed it up midway through the third quarter. Driving to the basket on a fast break, she caught a hip from a Notre Dame defender. The shot went up but was off due to the contact, and Durr slammed to the floor before nearly sliding into the goal. No whistle, and Notre Dame quickly converted off the transition. Asia smacked the floor with both hands in frustration, and said something that might get your mouth washed out with Life Buoy soap.

Despite this, the Louisville women demonstrated once again that team comes before any individual. Despite their obvious frustration, they never quit.

In the locker room after the game I asked Sam Fuehring about a comment from The Crunch Zone’s Joe Kelly who asked if Sam was essentially this team’s Ellis Myles. Sam had two things to say in response. First, she asked, “Who’s Ellis Myles?” Second, after a brief explanation from this old dude, she talked about how happy she was that people noticed her contributions beyond the point totals. To her, showing newcomers that the game is intense and physical should help in drawing attention to the sport, and that makes her happy.

All is not despair and loss. As the confetti blower rained down tiny colored pieces of sadness on my head, I couldn’t help but feel despondent. But in the looker room, the women were already smiling and even joking with one another. But beneath that was a smoldering intensity. They weren’t laughing because they weren’t taking the loss seriously. They were laughing because they knew that today was not the end. There are more things in heaven and earth, Horatio, than are dreamt of in your philosphy.

This is one team with one dream. March is just beginning, and there is a bigger prize that waits.