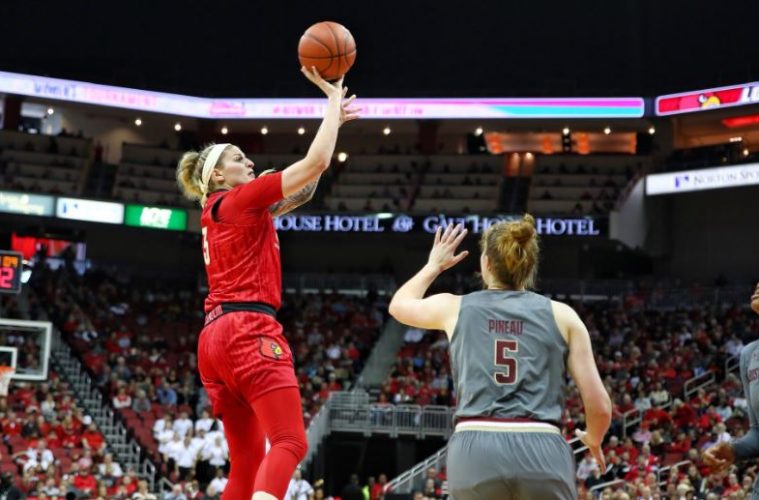 In a result that held few surprises, the #4-ranked University of Louisville women’s basketball team easily defeated the struggling Eagles of Boston College 87 to 51 in front of 11,000+ at the KFC Yum! Center in downtown Louisville, KY. The Eagles now have a 3-12 conference record while the Cardinals improve to 12-2 in conference play and 25-2 overall. An intense first four minutes of play set the tone and, with only minor exceptions, the Cardinals had firm control from start to finish.

While the Cardinals had the hot hand, the defensive effort deserves particular praise for managing to hold a team averaging 68.9 points per game in conference play to just 51 points on 42% shooting. The Eagles have been held to less than 51 points only once this season, that being in a 97-47 loss to Notre Dame. All five of BC’s top scorers were held under their scoring averages as the Cardinals found every way possible to disrupt the opponent’s offensive schemes. Louisville would end the game with three blocks and 11 steals, dominate the glass 38-27, while Boston College would finish with 24 turnovers.

The only point of concern (and it’s not a large one) was seeing how the Louisville defensive scheme was impacted without Bionca Dunham on the court. #33 picked up her second foul just four and a half minutes into the first quarter, leaving Sam Fuehring and Kylee Shook to man the interior against the Eagles’ leading scorer Emma Guy (10 points, 4 rebounds). Shook has come a long way but still lacks hard aggression and sometimes reacts slowly to dribble-drive penetration. As such, Fuehring often found herself on the weak side with little opportunity to help before Eagles guard Lowery (12 points) penetrated to the basket or dished to a waiting Guy or Georgia Pineau (8 points). Perhaps Jeff Walz also noticed, as he let Dunham remain on the court with three fouls throughout most of the third quarter. She would eventually foul out with six and a half minutes remaining in the game, by which time the end result was a foregone conclusion.

Yet fouls were more of a hindrance for the visiting Eagles. A very intense and fast first quarter found the officials using the whistle sparingly. As the Cardinals lead started to increase, their opponents became more and more physical. Perhaps it was a desperation tactic, or perhaps a relatively whistle-free first quarter had conditioned them to think it was a viable option. Either way, Boston College would finish with 23 fouls. As things became more physically aggressive, there were three particular moments of concern.

Midway through the second quarter Arica Carter attempted to connect with Asia Durr on a long pass in transition. With eyes solely focused on the ball, the Eagles’ Lowery attempted to intercept the pass and instead intercepted Durr. Momentum carried Lowery into and beneath Durr while the Cardinals star was still in the air, and both players collapsed in a heap in front of the scorers table near the Boston College bench. A collective gasp was issued from the assembled Louisville fans, followed by a hushed and worried vigil. Fortunately, both players returned to their feet with seemingly no long-lasting injuries.

Things then nearly got out of hand as Boston College’s Taylor Soule struggled with Sam Fuehring underneath the basket for a jump ball. Both players exchanged words before Jazmine Jones came in to pull Sam away, but both Fuehring and Soule would be hit with technicals. Soule would later find herself disqualified after a spiteful brush past Dana Evans and one of the officials. Admittedly, it was a bit petty but it probably wasn’t tech worthy. But by that point the officials were far more interested in attempting to re-establish control over a game that had gotten very handsy.

Despite Boston College’s display of physicality over defense, the Cardinals had no issues finding gaps to exploit for easy baskets. Nearly half of Louisville’s points came from the paint as they were repeatedly able to blow by Eagles defenders for layups or quick passes to the waiting hands of Sam Fuehring or Kylee Shook who finished with 11 and 14 points respectively. The Cardinals would also capitalize on BC’s poor ball handling to generate 27 points off the Eagles’ 24 turnovers. Louisville shot 52% on the afternoon, being the first time they’ve managed +50% shooting accuracy since a month ago vs Florida State. The Cardinals shot relatively poorly from deep, going 6 for 19 from three point range. But, you don’t have to hit the long ball if your opponent is giving you a clear lane to the hoop.

Asia Durr would finish with 23 points to lead all scorers, with only three of those coming from beyond the arc. 10 of her points were thanks to going 10 for 13 from the free throw line as Boston College’s fouls mounted late in the game. Kylee Shook once again showed she’s been bitten by the three-point bug as she went two for two from range. And once again Dana Evans showed her sixth-player skills as a strong second half off the bench ended with six points, four rebounds, and three assist.

Mykasa Robinson, however, was not to be seen as, per Jeff Walz, she is on concussion protocol after an injury vs Virginia Tech. Out of an overabundance of caution Walz and staff decided to keep the freshman guard at the dorm as she continues to heal. Her absence presented an opportunity for fellow true freshman Seygan Robins and redshirt Lindsey Duvall to step in throughout the game, and both would live up to the challenge. Duvall finished with nine points while going two for three from three-point range, and Robins notched four assists and three points in 13 minutes of play.

With March approaching, Jeff Walz must be happy that his squad came out with energy and intensity. Despite playing a greatly inferior opponent, the Cardinals did now allow their rhythm to be disrupted even in the face of physical play and occasional heated moments. Louisville now moves on to face the #9-ranked Wolfpack of N.C. State. on Thursday at the KFC Yum! Center. It’s a game that has serious connotations for ACC tournament seeding, with both Miami and N.C. State jockeying for position before meeting each other for their last game of the regular season. And of course the Cardinals are doing everything they can to ensure they remain in the hunt for a regular season championship.