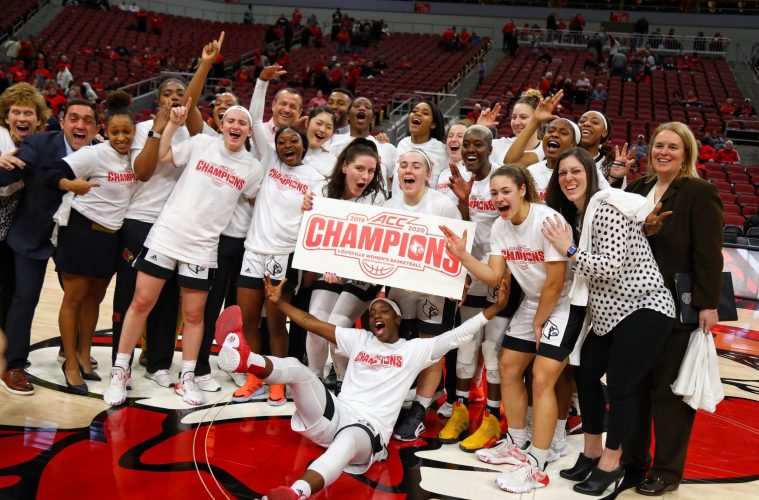 Missing your top scoring point guard and two of your top defensive players is never a good thing. It no doubt leads to additional anxiety with a regular season title up for grabs and the post-season just a week away. With Dana Evans and Elizabeth Balogun held in reserve, and Bionca Dunham playing limited minutes due to knee issues, it would have been easy to predict a struggle against the offensively talented Boston College.

Whether intentionally or not, the Louisville women’s basketball team dispelled any questions surrounding their depth on Thursday night with a 68-48 demolition of the Eagles. Holding their fourth straight opponent to under 50 points, the #5 Cardinals proved that they are ready for Greensboro while simultaneously earning their first outright ACC regular season title.

The first quarter didn’t get off to the hottest of starts, with a minute and half of fumbling ticking away before Jaz Jones was able to open scoring with a jumper from the wing. Compared to the run-and-gun game a month and a half ago, Thursday’s contest felt decidedly more chill early on. That changed rapidly as the Cards put together a 10-2 run that drew a quick timeout from the Boston College bench.

But while the Eagles seemed to be on their heels, head coach Joanna Bernabei-McNamee wasn’t quite done yet. Shifting to a perimeter attack, Eagles sophomore hit a hat trick of three pointers in just the final three minutes of the quarter, and a Louisville 18-6 lead was suddenly reduced to a 20-17 margin. The obvious question was, of course, would we see Evans and Balogun despite their hobbled status?

Whatever discussions were had in between the first and second quarters, it became clear that Jeff Walz and staff had the utmost confidence in their squad. Mykasa Robinson and Yacine Diop had the helm, just as they had against Pitt. Liz Dixon frequently rotated in for Bionca Dunham to reduce wear on her knee. And Evans and Balogun remained safely on the bench.

By the time Boston College limped into the media timeout at the halfway point through the second quarter, the Cards had put together a devastating 17-5 run. Not even the pause could stop the bleeding as the Eagles were barely able to manage seven points in the second quarter on 3 for 12 from the field. Louisville added another nickel to finish the segment 22-7, and in merciless fashion. With time running out, Kylee Shook intercepted a pass and coolly dribbled just inside the three point line to hit a smooth jumper as the horn blew. The KFC Yum! Center, and the Louisville bench, erupted.

Coming out of the locker room it was clear that Walz was comfortable putting things into cruise control. What had been an explosive first and second quarter settled into a relatively low scoring tit-for-tat. Liz Dixon was able to provide more than adequate assistance to Kylee Shook, while also sparing further wear-and-tear on Dunham’s knee. Jessica Laemmle and Lindsey Duvall both got quality minutes as the normally backup-backups backed up the front line. Duvall drew particular adulation from the crowd with a powerful spin move for a basket plus the and one. Diop and Robinson gathered further experience that will no doubt prove invaluable come tournament time.

For the Eagles, Taylor Soule (11 pts, 11 rebs) and Emma Guy (10 pts, 4 rebs) did everything they could but it was to no avail. Makayla Dickens had her first quarter triplet of triples but was completely shut down throughout the entire remainder of the game. With an atrocious 23 turnovers from the Eagles being converted into 29 Louisville points, it’s questionable whether there was ever any chance of mounting comeback. While the Cardinals’ defense was a key factor, Boston College did themselves no favors.

It was only when Yacine Diop tweaked an ankle and headed to the bench for attention from the trainer that the mood was at all darkened. Fortunately her return in the fourth quarter signaled that no serious harm had been done. With about two minutes to go a chant of, “ACC!” started, and perhaps was egged on, from behind the Louisville bench. It quickly spread and the KFC Yum! Center was on its feet as time expired with the Louisville Cardinals the outright 2019-2020 ACC champions.

Suffice to say, the accolades are numerous:

It’s difficult to find a lot of negatives with the win over Boston College. The Cardinals now roll into Senior Day against Virginia Tech with essentially nothing to play for other than a thirst for victory. But perhaps besides that it would behoove the Cards to help Duke knock the Hokies out of the four-seed spot going into the ACC tournament. Either way, the ACC title and one-seed are secured, and another opportunity presents itself to rest Evans, Balogun, and Dunham.

Tip-off between Louisville and Virginia Tech is scheduled for noon Sunday in the first set of a double-header. The men will play Virginia Tech at 6:00 p.m. as both squads celebrate the seniors during their mutually final regular season home games.