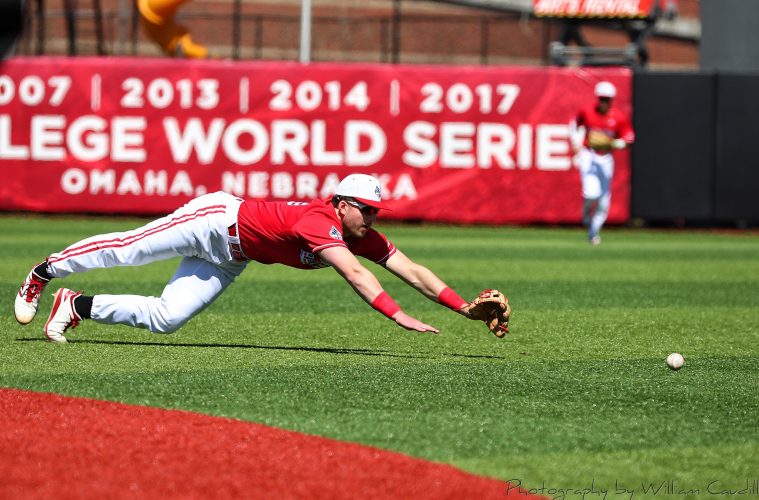 Fresh off a midweek game where they plated 12 runs, the #4 Louisville Cardinals (18-6, 6-3) turned around and were only able to plate 6 total runs against the Georgia Tech Yellow Jackets (16-8, 5-4) en route to losing the home series 2 games to 1. Louisville was one batter away from suffering their first 3 game sweep at Jim Patterson Stadium since the stadium’s inaugural season in 2005 (East Carolina).

Over the first two games in the series, the offensive had all but completely gone missing. The Cardinal Nine batted 7-60 (.117) while only plating a single run in game 1 and getting shut out in game 2. Fortunately for the series finale the offense woke back up, plating 5 runs on 12 hits including a walk-off two run single. As for the pitching staff, they did a much better job than their hitting counterparts. They held the Yellow Jackets to just a .206 batting average on the weekend (.299 heading into the series), and just 3.7 runs a game (6.4 heading into the series).

Despite breaking his career high in strikeouts for the third time this season, Reid Detmers’ day on the mound was not enough to overcome offensive ineptitude, as Louisville lost the opening game of the weekend series vs. Georgia Tech by a score of 3-1. Detmers & McAvene combined for 18 strikeouts and 3 walks, while the Cardinal Nine amassed only 2 hits and 2 walks, the latter both coming from Logan Wyatt.

Like all previous Friday nights at Jim Patterson Stadium so far this season, once again it was the Reid Detmers show. The sophomore southpaw only allowed three base runners through the game’s first six innings, and struck out a new career high 16 batters while only walking 2. This also set the new Jim Patterson Stadium record, breaking the old record of 15 held by Brendan McKay.

It was fortunate for Louisville that Detmers had another spectacular start, because the rest of the Cardinal Nine couldn’t seem to get anything going against GT’s Xzavion Curry. While the Yellow Jackets’ marquee pitcher was on the mound, UofL would only manage three base runners through his 8.0 inning start. The first was a leadoff double to start the game from junior Jake Snider, and the other two were junior first baseman Logan Wyatt’s 32nd and 33rd walk of the season in the fourth and seventh innings respectively. Snider’s double was followed by a groundout to advance him, with a sacrifice fly sending him home in the next at-bat for Louisville’s first run of the contest.

While Detmers was having one of his best performances to date, inevitably the red-hot Georgia Tech offense eventually got things going as the game progressed into the later innings. Capitalizing on the fact that Detmers would eventually exit the game with 118 total pitches thrown, the Yellow Jackets plated a run each in the seventh and eighth innings to take the late 2-1 lead. With two outs in the eighth, junior Michael McAvene would enter the game to take advantage of the batter-pitcher matchup, where the flame throwing right-hander would retire the last batter in the inning.

GT didn’t make the prospect of a ninth inning rally any easier for Louisville. With McAvene continuing to throw mostly fastballs, the Ramblin’ Wreck eventually guessed correctly on the pitch location and launched a home run over the right field wall. Even with the 1-2-3 guys in the lineup coming up to bat in the bottom of the ninth,

With the pitching not firing on all cylinders like it had the night before, another subpar day at the plate spelled doom for Louisville, as the Cards lost game 2 of the series to secure their first ACC series loss of 2019. The home team only struck out 5 batters while walking 5, on top of only notching 5 base hits.

Like the day prior, the Cardinal Nine continued to struggle at the plate against another solid Georgia Tech starter. While they weren’t completely guessing wrong at pitch location in the zone as they only struck out 5 times, they didn’t show much patience at the plate. Not only did Louisville only draw 2 walks, it was their only 2 plate appearances in the game that featured 3 ball counts. Out of their 34 plate appearances, only 11 lasted longer than 3 pitches and they had 7 1-pitch plate appearances. They grounded out 16 times, and only collected 5 hits in the game. Because of this, GT’s Connor Thomas put up a 96 pitch complete game, good for the fastest complete game in his career.

Unfortunately, all these struggles at the plate were not grouped with a lights-out performance on the mound like it was the night before. The Yellow Jackets got on the board early with a towering 2 run home run in the second inning, and starting pitcher junior Nick Bennett only struck out 3 batters in his 6th start of the season. Once he surrendered a third run via the sacrifice fly in the sixth as well as a leadoff single in the seventh, fellow lefty junior Adam Elliot relieved him to get out of the inning without surrendering a run.

However he too would get in a jam of his own in the eighth, prompting Coach Mac to insert right-hander Shay Smiddy. He would exit the inning only giving up 1 additional run, and freshman southpaw Garrett Schmeltz would pitch a scoreless ninth leaving Louisville one last inning to overcome a 4 run deficit. But two quick groundouts and a fielders choice force out was all that Louisville could muster at the plate, en route to getting shut out by the Ramblin’ Wreck.

With the prospect of getting swept in a three game series at home for the first time in well over a decade on the line, the Cards waited until the very last minute to make sure this did not come to fruition. Louisville’s clutch hitting decided to make an appearance late in the game, as they nabbed their third walk-off victory of the season in a 5-4 affair.

Both teams began the game by plating a run in the first, with Louisville’s coming courtesy of Alex Binelas. The freshman third baseman sent a base hit up the middle to send junior shortstop Tyler Fitzgerald home, giving him 6 RBI over his last 5 games. Louisville would crack the scoreboard yet again in the fourth inning, as Tyler Fitzgerald’s 20th RBI of the season and a sacrifice fly from junior first baseman Logan Wyatt would give the Cards their first crooked number inning of the series.

Georgia Tech wasn’t far behind them though and were determined to complete a sweep. Making his first start since last season, sophomore right-hander Bobby Miller had trouble containing the one of the conference’s best offenses. Georgia Tech rallied back in the fifth inning after losing the lead in the inning before, plating two runs to tie the game. Over his 5.0 innings of work, he amassed 95 total pitches while only striking out 5 of his 23 batters faced.

Even with a change on the mound in the sixth, the Ramblin’ Wreck still continued to go after Louisville’s pitchers. Courtesy of a pair of wild pitches from freshman right-hander Jared Poland, GT broke the 3-3 tie in the top of the seventh to give Louisville just three more opportunities to avoid getting swept. They loaded the bases in both the seventh and the ninth, with the latter paying off massive dividends. Freshman left-hander Trey Leonard went after the first pitch he saw, sending the ball right up the middle to allow 2 runners to come home and secure the sweep-preventing, walk-off victory.