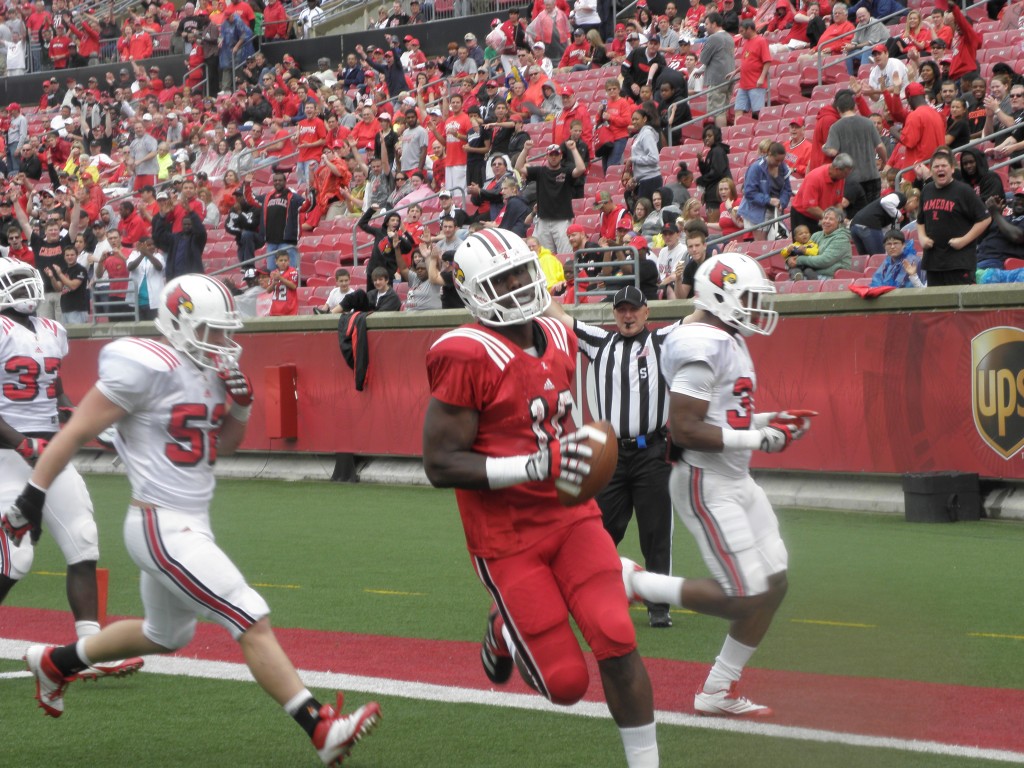 Charlie Strong has asked more questions than gave answers about his 2013 Louisville Football running back core.
Questions like: ‘Whose going to step up?’ Proclamations like: ‘We’d like to see someone grab that spot [as primary ball carrier]’.

It’s time to stop asking those questions. After Louisville’s (5-0) rather motionless 30-7 defeat of Temple (0-5), the answer couldn’t be more apparent. Dominique Brown should be the feature back.

This answer has not been simple and sure there are some detractors. The star-studded Michael Dyer has shown glimpses of his former BCS Championship MVP self. Senorise Perry certainly shown what he’s capable of last season, nearly eclipsing the 1,000 yard mark before an ACL tear. I get it. These guys are exciting and certainly have plenty of talent. They certainly justify getting their share of carries, but Brown should be leading the way.

Why? The answer is simple: Dominique Brown has exemplified what a ‘full-package’ ball carrier should look like.

“Dominique [Brown] made some big runs,” Head Coach Charlie Strong said following the win. “All three of our backs played very well. But you look at Dominique last week he made a 77 yard run. But they are all going to get their opportunities, and we tell those guys ‘You’re gonna rotate by series’, so don’t be greedy. If a guy gets eight [carries], he gets eight, sorry.”

As much as Strong may want to push the narrative of an equal representation of runners on the field. It’s getting much harder to do that when one does nothing but preform while on the field.

Brown ran the ball 11 times for 74 yards on Saturday on his way to being the team’s leading rusher. He dodged around, run through, and over any Temple defender in his way. Out of the 11 runs, Brown’s shortest was 2 yards, every over run was over 5 yards. He ran for a TD midway through the second quarter and never touched the ball again until the fourth. The offense looked the most free-flowing it looked all game with Brown in the game.

Brown hasn’t taken the easiest road to get to this point. After an injury only two games into 2012, Brown missed the rest of the season. It’s been a long time coming for Junior from Cincinnati, Ohio and he has certainly made up for that lost time.

Brown has been the most explosive of the group. He claims the two longest runs of the season for the Cardinals. One 32-yard run and a 72-yard run leaving behind a cloud of dust.

Averaging 6.2 yards per carry, Brown has easily been the most productive runner of the bunch. Senorise Perry, who has had double the amount of rushes as Brown, is averaging 5.5 per carry. Michael Dyer, who has also had more carries than Brown, has averaged the same amount as Perry. It’s a bit mystifying that the most productive runner on the Cardinals team has been the one with the fewest carries. Brown seems to be giving the Cardinals Coaching Staff every reason for that to no longer be the case.

Perhaps it’s time to unleash the one who give the Cardinals a massive lift in their biggest win of the season with eight consecutive carries on a TD drive, to give them a critical score before the half.

Perhaps it’s time to let the one who imposes his will on opponents with his bone-crushing running style, to do just that.

Yes, perhaps it’s time to rekindle the fire of the player who rushed for 91 yards against Kentucky as a Freshmen.

After Saturday, there is no more questions. Just answers. Dominique Brown has staked is claim. It’s time to give the ball to number 10.