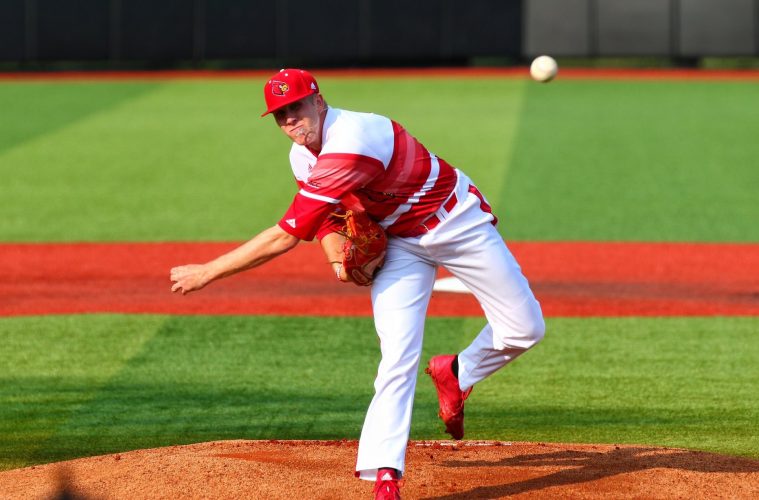 In their first game on the Road to Omaha, the #7 Louisville Cardinals (44-15) overcame an early 3 run deficit over the UIC Flames (29-22), plating 5 unanswered runs en route to a 5-3 victory over the Horizon League Champs. The win was powering by a spark of offense from outfielder Danny Oriente, a strong rebound from starting pitcher Nick Bennett, and an electric finish from reliever Michael McAvene.

They might have been the 4 seed in the regional, but it didn’t take long for UIC to make some noise. In both the first and second innings, the Flames lead off the inning with a solo home run. Center fielder Derrick Patrick provided the early offense in the first, with catcher John Figueroa doing so in the second, with both launching their homers to the same spot in right-center field. Prior to the regional, the duo had combined for 5 home runs all season long.

A failed putout at second base added another run to make it 3-0 in the Flames’ favor, but Louisville was not about to let their late season offensive woes continue. Junior right fielder Danny Oriente finally was able to launch his first home run of the season, and it couldn’t have come at a better time as his 2-run homer cut UIC’s lead to just 1. Taking advantage of a Flames fielding error, a scorching grounder off the bat of fellow outfielder Lucas Dunn with runners on the corners got past the first baseman, allowing Louisville to plate the tying run.

Rallying with a 3 spot to come back and tie the game after 2 innings, the Cardinal Nine took their first lead of the postseason in their next inning at bat. Junior shortstop Tyler Fitzgerald would lead off with a double, then two batters later Alex Binelas would inadvertently deliver in the clutch and while Fitzgerald took advantage of another UIC error. Accidentally laying down a bunt while trying hold his swing, Binelas would leg out a single while a throwing error from UIC catcher Ryan Hampe would bring home Fitzgerald from second base. The Cards would add their final run of the game in the 5th via the sacrifice fly from Danny Oriente for his 3rd RBI of the game.

After having a rather shaky start to game, junior Nick Bennett had a very quick turnaround. Getting a visit from pitching coach Roger Williams towards the end of the second, he then went on to retire his next 12 batters faced, striking out 5 of them. He would end his start with 6 total, going 5.2 innings deep with only 2 earned runs on 3 hits. His relief would be every bit as good as the end of his start was. Senior RHP Bryan Hoeing & sophomore LHP Michael Kirian would combine to toss 2.1 scoreless innings an allow only three baserunners.

But allowing a pair of baserunners to start the ninth forced head coach Dan McDonnell to make one final call to the pen, and bring in flamethrowing reliever Michael McAvene. With runners on second and third with no outs, the sophomore right-hander seized his moment on the big stage and finished with an electrifying ninth inning. He would not throw a fastball slower than 96mph, striking out the side and throwing a 100mph pitch to draw the game ending strikeout.