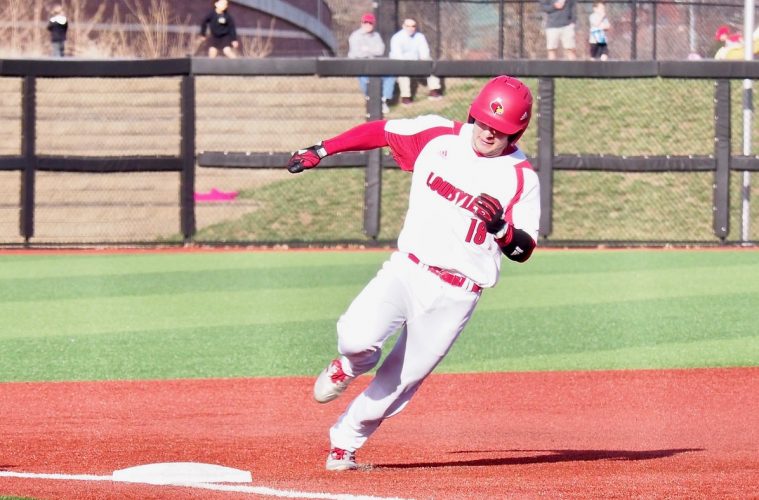 For the first time since joining the Atlantic Coast Conference in 2015, the #11 Louisville Cardinals lost back-to-back conference series’ while members of the ACC, this time to the hands of the #11 Clemson Tigers. During the first two games in which Louisville lost, they batted 2-22 with runners in scoring position and plated only 4 runs. Louisville drops to 4-5 in ACC play and has lost 6 of their last 10.

Despite a superb outing from Adam Wolf, Clemson’s Jacob Hennessy was just a tad better as Louisville was unable to generate any sort of meaningful offense, losing 3-1. The Cardinal Nine suffered their first ever loss at home when playing the Tigers, previously having a 3-0 home record against Clemson.

Like many of Louisville’s opponents this season, the Tigers wasted little time establishing a lead in the early frames. They got the ball rolling in the second inning when they were able to capitalize on an infield error by the Cards and bring home a couple runs. Although Louisville was able to counter in the bottom of the inning and chip into Clemson’s lead with a sacrifice fly on behalf of junior catcher Pat Rumoro.

Even with starting pitcher junior right-hander Adam Wolf continuing to wheel and deal throughout the game, racking up 9 strikeouts in his 8.0 inning start (his longest career outing), that still wasn’t enough to continue keeping Clemson off the board. They’d push their lead back up to 2 runs in the fourth inning while simultaneously keeping the Cards off the board in every inning after they broke through in the second. Louisville threatened with runners in scoring position in the ninth, but was unable to finish the job.

In game 1 of a scheduled doubleheader after Saturday’s game had to be postponed, the Louisville Cardinals fell once again to the hands of the Clemson Tigers to clinch the series. Despite Clemson’s 4 runs in the fourth inning being their only runs of the game, this would be enough to mark the first time the Cardinals had lost consecutive conference series while members of the ACC.

Making his third start of the season, sophomore right-hander Shay Smiddy had a relatively solid start to the game putting up 4 scoreless innings up until Clemson’s bats woke up. Once Clemson knocked middy out of the game after giving up a leadoff double and a walk in the fifth inning. Capitalizing on getting Smiddy removed from the game, Clemson went on to bring in 4 runs off of freshman left-hander Michael Kirian. Coach Mac would be forced to go to the pen yet again and have junior right-hander Brian Hoeing finish the inning.

Louisville spent the remainder of the game trying to play catch up, and did a solid job of it immediately after falling behind. Sophomore first basemen Logan Wyatt and freshman outfielder Drew Campbell both added runs in the fifth, while Wyatt would bring in another run off a bases loaded walk in the sixth. Unfortunately, it would prove to be too little too late as Louisville had struggled to capitalize on several opportunities with runners in scoring position. The Cardinal Nine ended the game with a whopping 14 runners left on base, batting 1-11 with runners in scoring position.

For the second act of the doubleheader against Clemson, the Cardinal Nine avoided getting swept and rebounded with a solid 4-1 victory behind much improved pitching and hitting from the game prior.

Flipping the script from the usual, Louisville would be the one to score first and score early, cracking the scoreboard in the second inning off a bases loaded fielder’s choice from Danny Oriente for the first Louisville lead in the series. Determined to keep the runs coming, junior catcher Pat Rumoro would drive in an RBI double and sophomore third baseman Justin Lavey would follow that up with an RBI single to give Louisville a 3-0 advantage after four innings.

Following three previous bullpen appearances on the season, sophomore left-hander Nick Bennett made his first start of the 2018 campaign in game 3 of the series. During his 5 innings on the mound, he was able to match a career high in strikeouts with 7 while only allowing 2 hits.

Once Louisville added another run in the fifth inning thanks to Logan Wyatt, Coach Mac felt comfortable enough with giving him some rest and sent in freshman left-hander Reid Detmers to relieve him. He’d pitch a scoreless 6th but when Clemson finally broke through in the seventh inning, fellow freshman reliever Bobby Miller would come in his place and finish the inning without allowing any more Tigers runs.

Miller would keep going into the eighth and gave the Louisville pitching staff a much needed scoreless inning. Wanting some much needed insurance to insure a comeback would not be in the making, Justin Lavey (3-4) would drive in his 3rd RBI of the game to give Louisville a 5-1 advantage heading into the final frame. All-American junior right-hander Sam Bordner came into the ninth inning and finally closed the door on the pesky Clemson Tigers.