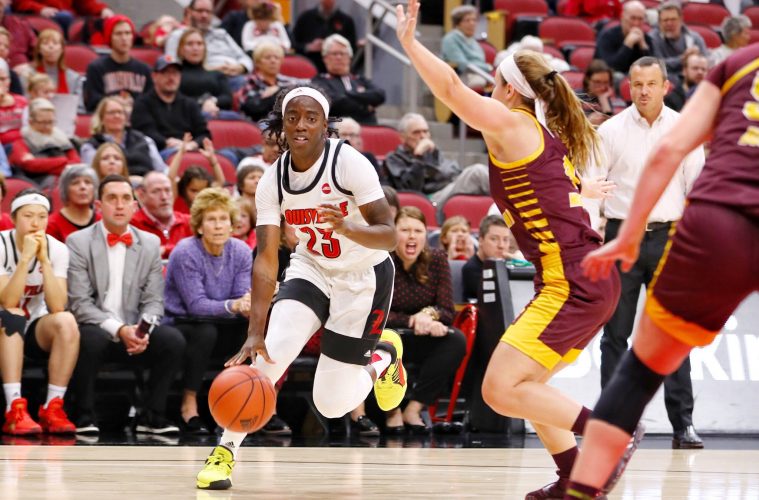 That was Jeff Walz’s succinct response when asked about sending Jazmine Jones back onto the court with four fouls and nine minutes still remaining in the game. And win he did, thanks in large part to a career night from Jones and an equally impressive career-besting contribution from Dana Evans. All informed observers knew the kind of challenge that Central Michigan represented, but also recognized that the challenge was relished by Walz. Despite some tense moments, the Cardinals emerged victorious over the Chippewas 76-63 in from of 7,500+ at the KFC Yum! Center on Thursday night.

Senior guard Jazmine Jones has always been a key contributor both on and off the court, but her career high 25 points against the Chippewas was the flint that sparked the Cardinals offensive fire from beginning to end. Jones would spend a mere seven minutes on the bench despite foul trouble from midway through the third quarter and onwards. If Jaz was the flint, Dana Evans was the tinder. Evans seems to be adjusting quite well to her starting role after finishing the 2018-2019 season as ACC sixth player of the year. A seven point first half was bested by an explosive 17 point second half including a personal 11-2 run against the Chippewas. Her 25 points and complete game 40 minutes are both new career highs, and proved crucial to the Cardinals victory.

Defensively the Cardinals struggled in stretches through the game, including much of the first quarter. The guard play of Central Michigan’s Micaela Kelly and freshman standout Molly Davis proved too agile for Louisville’s guards to maintain positioning. Four lineup changes in the first quarter alone finally found a defensive spark with Kylee Shook and Mykasa Robinson coming off the bench. Despite a flat-footed effort out of the gate the Cardinals were able to put together a 7-2 run to end the quarter with a safe, if precarious, seven point lead.

Despite being in her first year at the helm this is not Heather Oesterle’s first rodeo. Years of experience under Sue Guevara’s tutelage have molded her into a dangerous opponent and her first half adjustments reignited the Chippewas in the second quarter. A return of the weak defensive positioning was coupled with an offensive slump that allowed Central Michigan to win Q2 and crawl back to within three by halftime. Jeff Walz was clearly frustrated with his team’s effort in the paint, saying afterwards, “Don’t give up a two foot shot for a one foot shot.” The Cardinals accuracy in the paint was woeful throughout the night: 12 for 28 under the basket, and 17 for 42 in the paint overall.

Although worrisome, the action in the paint proved not to be the crucial element for Louisville’s ultimate success. The second half began in relative quiet fashion with a small 4-0 run to push the Cardinals lead back to seven, but what followed harkened back to last season. Mykasa Robinson and Kylee Shook continued their stellar defensive performance, relying on hustle and grit to keep the Chippewas at bay. Given the opportunity, Dana Evans did what Asia Durr had done so many times before and lifted the entire team onto her back. A stretch of 11 points all came at the hands of Evans, and the Cardinals seemed firmly in control.

But foul trouble began to rear its ugly head as the third quarter progressed, and Louisville was at times without key contributors as Jazmine Jones, Bionca Dunham, and Elizabeth Balogun headed to the bench. A tough effort from the Chippewas at times had them back within six points in the fourth quarter, but several factors conspired to keep them firmly behind. 15 of 46 fouls were called in the fourth quarter and slowed the pace considerably. Things did begin to get a bit chippy, with a few frightening moments including an intentional foul committed on Mykasa Robinson, but Central Michigan was never able to get the needed momentum. A five minute scoring drought to end the game sealed their fate and the Cardinals emerged victorious.

Heather Oesterle and the Chippewas gave Louisville all they could handle, just as was to be expected. Freshman Molly Davis is certainly something special and will be interesting to watch as her career progresses. Just as with last year, Central Michigan is not the kind of team you want to draw in March.

The Cardinals improve to 3-0 and have two home games remaining in the five game opening stretch before heading to the Virgin Islands. Walz continues to tinker with his lineups but it’s abundantly clear that he has the depth and talent for a highly successful season. It’s only three games in, and some of the rough edges have a few months before they need to be completely polished. But in the meantime talent, depth, and hustle seem to be doing fine.