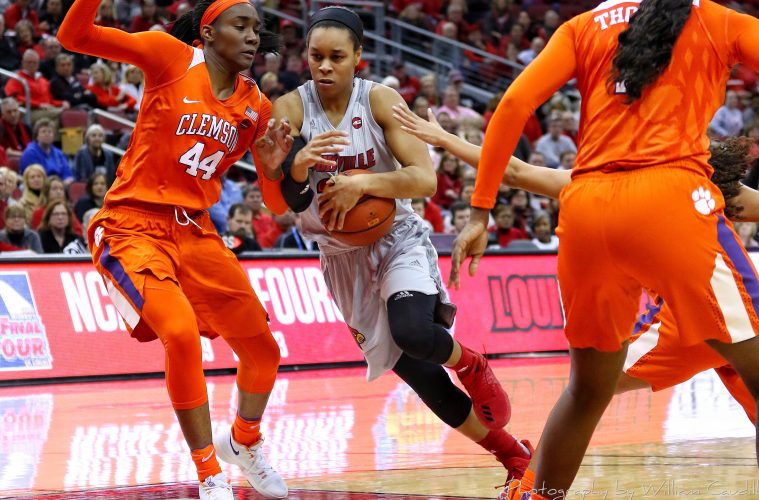 It was only natural to have some concern coming in to this game against Clemson, and the first two minutes gave life to those fears. A sluggish Louisville women’s basketball team started the game by giving up three consecutive offensive rebounds and two quick fouls to allow Clemson (14-7, 5-3) an early four point lead. But the Cardinal juggernaut could not be stopped as Louisville improved to 21 and 1 with a 76-44 win in Clemson on Saturday afternoon.

If the start was a bit jittery, the rest of the first quarter was anything but as the Cardinal offense began to pick apart the Tiger zone from beyond the arc. Asia Durr opened up with two quick threes and by around the five minute mark the score was Durr 8 – Tigers 4. Dana Evans would quickly join the action as Louisville streaked ahead with an 18-0 run before Clemson could adjust.

And yet the Tigers were not ready to concede the fight. Junior leading scorer Kobi Thornton and graduate guard Simone Westbrook would do their damnedest to keep Clemson in the fight. Head Coach Audra Smith had seen enough of the Cardinals’ perimeter shooting and switched to man as the second quarter opened. While the switch did help, it was primarily the the Tigers’ improved shooting that brought them back into the thick of things. Guards Thomas and Collier would each contribute three pointers as insiders Thornton and Bennett attacked from the wings, and Louisville’s lead had shrunk to one about halfway through the frame.

Two primary factors allowed the Cardinals to escape to halftime relatively wound-free. First, Clemson is a team that gives up the ball an average of 19.5 times per game. Just as Louisville adjusted to end the scoring drought, the Tigers would quickly cough the ball up four times as the clock ticked down. Secondly, Jazmine Jones joined the fray with seven points in the second frame. As such the margin was only cut by two and the Cardinals took a 35-27 lead into the locker room.

Both teams were coming off relatively quick turnarounds after games against UConn and Notre Dame on Thursday night. Fatigue would start to show as the second half began. But Louisville would get four quick points off transition baskets, and despite a Clemson timeout it was off to the races. The Tigers would not score a single field goal in the entire third quarter, netting a mere five points thanks only to free throws.

In fact, Clemson would go 0 for 17 from the field until the 7:30 mark in the fourth quarter. Jazmine Jones would continue her hot streak on her way to lead all scorers with 17 points. Durr and Evans weren’t done either, and would finish with 12 and 15 points respectively while Sam Fuehring would contribute 10 points with tough interior play.

But the Cardinal defensive effort was a star for the second game in a row. Fuehring’s 10 points were complemented with 9 rebounds, six of those being defensive. Sam was probably denied a double-double only by the fact that she picked up a technical foul in the fourth quarter after…questioning the quality of officiating, shall we say. Arica Carter once again proved to be a dynamic player with the ability to defend even when mismatched.

Yet the gold medal goes to Kylee Shook. After a quiet performance against UConn on limited minutes, Shook returned to her aggressive ways. A season-high 15 rebounds, three assists (also a season high), three blocks, and two steals. Clemson typically relies on Thornton’s interior play to provide a significant portion of their offensive totals, but Shook’s (along with Fuehring’s) domination of the paint and the glass limited her to nine points, all in the first half. The Tigers’ offense had awoke to go 7 for 14 overall and 2 for 2 from three-point range in the second quarter alone. Over the entire second half they would be held to 3 for 26 from the field to finish the afternoon with an abysmal 24% shooting performance.

The Cardinals snatched 20 points from turnovers to Clemson’s five, even while turning the ball over 17 times themselves. Another impressive rebounding performance and Louisville won the glass 45-39, limiting the Tigers to seven second-chance points. All this while a Clemson team that thrives on fast break layups and post-ups was held to 16 points in the paint.

The women will now have a chance to rest up as they prepare to enter a latter half of the conference schedule that includes #18 Syracuse at home and undefeated #7 NC State on the road with additional tough match-ups against Florida State and Miami teams sporting 6-2 ACC records. The first, though, will be the bout with the Orange this Thursday, February 7 at the KFC Yum! Center. Syracuse is also 6-2 in league play while 17-4 overall.

Jeff Walz said if he could get his team to rebound, there was no telling how far they could go. It feels like we’re starting to see a glimpse of that possible future.