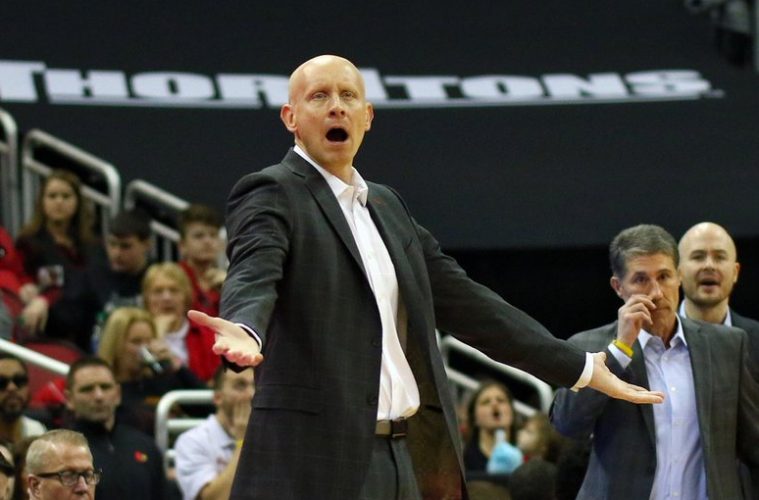 We need more energy. We need to be more aggressive. We just need our shots to fall.

Not exactly the most confidence building phrases to be hearing as February rolls into March. But, the #18 Louisville Cardinals (18-9, 9-5) are still well positioned to secure at least a bye in the ACC tournament and around a five or six seed for March Madness. A win against the #3 Virginia Cavaliers (23-2, 11-2) sure would go a long way to solidifying or even improving those figures.

On the bright side, it’s a new day and a new era. Chris Mack is a new variable in the Virginia-Louisville equation, and indeed one that brings some form of equivalency. It’s pack line against (sort of) pack line at the KFC Yum! Center, folks. Who shall prevail? Let’s break it down.

The Object Is To Make The Ball Go Through The Hoop

Virginia has the top defense in the country, limiting opponents to 54.6 points per game. Tony Bennett and the pack line defense is, at this point, nearly as infamous as the Syracuse zone. They match-up with a Louisville team that’s not exactly having much luck with the shooting part of the game.

With the middle packed tight, it’s unlikely that Malik Williams or Steven Enoch are going to have a lot of room to maneuver. In addition to that, during those two stretches of games specified above they’ve seen their combined scoring average drop from 21.7 PPG to 12.7 PPG. As such, Louisville’s guards are going to have to find their shooting spark if the Cards hope to stand a chance. Virginia is the third best in the nation in turnovers per game at 9.4 per game and limits opponent rebounds to a conference second best 29.7 per game. You’re not going to get a lot of second chances, so every chance has to count.

Christen Cunningham will no doubt continue to show his excellent ability to move the ball and create opportunities. Hopefully Williams and Enoch can set screens that free the Cardinal shooters for open looks. But those opportunities have to be capitalized upon. Jordan Nwora shot 50.5% for 20.7 PPG in the six-game win streak from Jan. 12 to Jan. 30. Since then he’s averaged 14.0 PPG on 33.7% shooting. But this can’t all be heaped on Nwora’s back. Cunningham and Sutton have both shown themselves to be Steady Eddies in terms of offensive contributions, but McMahon, Fore, Perry are going to have to find the stroke for this to be a contest. Both McMahon and Perry have begun to show signs of improved (or restored) perimeter shooting. That trend will need to continue.

Quick’s the word and sharp’s the action. Chris Mack keeps talking about his team’s low energy. If they bring that into the Yum! Center on Saturday afternoon, their fate is already decided.

What Aren’t You Good At?

Louisville’s dropped their last seven games against Virginia, and it’s primarily been a result of the Cavaliers’ maddening ability to disrupt almost anyone’s offensive production capabilities. It wasn’t as if Tony Bennett’s squads were offensive machines; it was simply enough that they prevented anyone else from being one. Now the Cardinals face a Virginia team that is pretty good offensively, led by junior guard Ty Jerome.

The guard trio of Jerome, Hunter, and Guy contribute 43.3 of Virginia’s average 71.8 points per game. Cunningham, Sutton, and Nwora all have the ability to man-up with the Cavalier guards, it’s just a matter of execution. The trend for the Cardinals hasn’t been a good one of late, as an average +14.0 point margin during the six-game win streak was flipped to -8.9 over the last six.

And the Cardinals face a team that’s not going to provide a lot of chances for steals, breakaways, and easy points in transition. So what’s the answer? It’s extremely cliché to say, but aggression. It’s what Mack’s been saying over the past several games. Khwan Fore said the same in Friday’s press conference. The team had a private, players-only meeting after the Syracuse loss to talk about the path forward. We know these guys are a tight unit, and are willing to make the effort needed to win. It’s just a matter of seeing them find it within themselves to execute. Pressure the Cavaliers, crash the boards, move quickly, and get into a groove.

So, will the eighth time be the charm for the Cardinals? It’s certainly within their capabilities. But there’s a reason this Virginia team has dropped only two games, both to Duke. It’s going to require a superhuman effort to overcome the Cavaliers defense. Unfortunately for Louisville, they’ve struggled to supply even their baseline level of energy over the past six games.

If they lose, it’s what most people would have expected to happen and it won’t hurt their post-season chances to a significant degree. If they win, it will silence some of the boo-birds and give the Cardinals a shot of much-needed energy as they roll into March. It’s all upside.

It doesn’t need to be said that every fan in this town remembers last year’s bullet-time heartbreak. Many of the young men on this team remember it just as well. Who’s to say, but maybe on Saturday turnabout will be fair play.