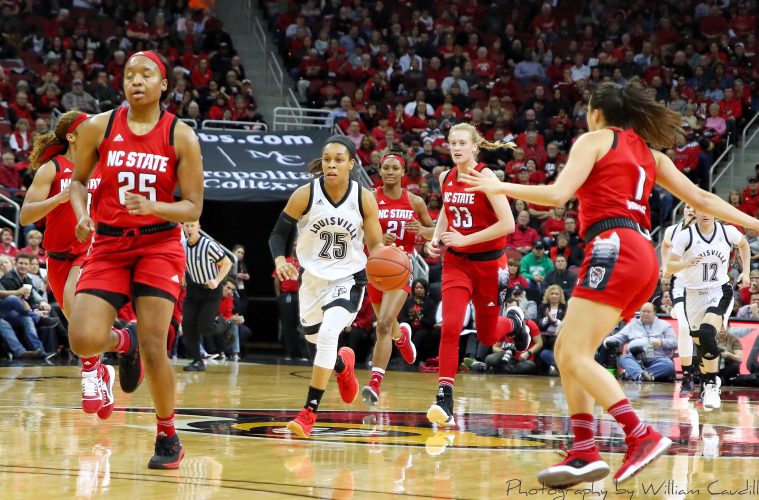 The stage is set!! Cardinals vs Wolfpack at 2:30 today for the second Semifinal matchup of the day. Notre Dame and Syracuse will play in Game 1 at Noon.

NC State downed Florida State 69-62 on Friday night in their first matchup to set up a rematch between the Cards and the Wolfpack.

The #2 Cards embarrassed #10 NC State in front of the Cardinal home crowd on senior night 92-62 on 2/28… or as some (mostly me) have commonly been referring to it as ‘Senior Nite Nite’. Asia matched her program record with 47 points on 17-27 shooting with 11 3-pointers made. Sam Fuehring had a double double 12 points and 12 rebounds. Dana Evans also came off the bench to score 15 points and had 6 assists.

Both teams in the quarterfinals:
Louisville won by 8 points over Clemson, 75-67. It was a quiet 24 points for Asia as she only landed 2 of her 11 attempted 3 pointers. She also didn’t get to the FT line once. As a team, the Cards were 7-9 at the line. 8 players saw minutes on the floor in the first post season game of the season. Mykasa Robinson saw 7 minutes in the first half when Jazmine Jones picked up two fouls within 33 seconds.
NC ST won by 7 over FSU, 69-62. Freshman center, Elissa Cunane, had 22 points for the Pack.. a team that had only 6 players see minutes on the floor they shot better than 43% from FG and 40% from 3 pt land for the game. They had 32 points in the paint vs FSU and 24 at Louisville. In their first meeting, the Cards got out to a 36-13 lead on the pack in the first quarter and never relinquished.