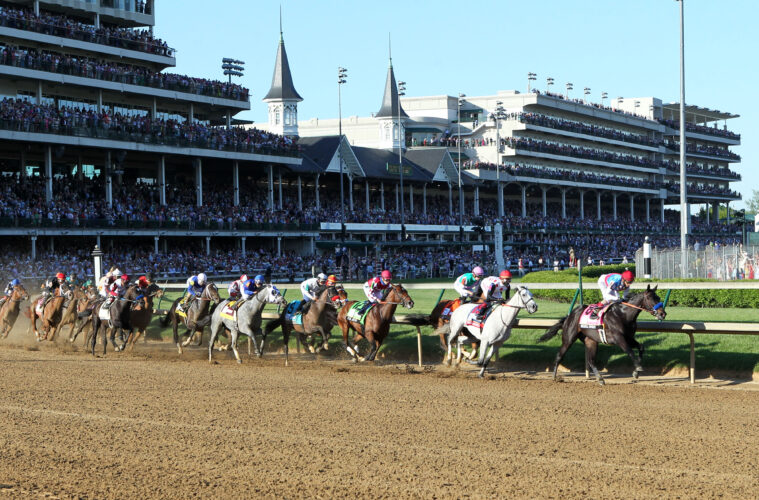 “It was very straight forward,” trainer Tim Yakteen said. “He worked three-quarters from the five-eighth pole. It was a typical Taiba work and we accomplished what we wanted. I got him in 1:12.60 and out in 1:26. We’re good.”

Drayden Van Dyke was aboard Taiba who worked in company with the 4-year-old American Admiral.

Owned by Zedan Racing Stables, Taiba is undefeated in two career starts will be attempting to become the first horse since Leonatus in 1883 to win the Kentucky Derby in his third start.

Yakteen plans to work Messier, the Santa Anita Derby runner-up, Friday morning with both colts scheduled to fly from Los Angeles to Indianapolis on Sunday and then van south to Churchill Downs.

“My general feeling is that both horses are doing really super (following the Santa Anita Derby),” Yakteen said. “They are both very professional and make my job easy.”

In addition to Messier working on Friday, Tami Bobo’s Fountain of Youth (GII) winner Simplification is scheduled to work at Gulfstream Park for trainer Antonio Sano.

Jockey Julien Leparoux was on hand to watch his Derby mount gallop.

The three-time winner is scheduled to work Saturday.

CHARGE IT, MO DONEGAL, PIONEER OF MEDINA – “All is good so far,” trainer Todd Pletcher reported Thursday morning after his trio of Kentucky Derby hopefuls galloped 1 3/8 miles during the 7:30-7:45 training window for Derby and Kentucky Oaks hopefuls.

Pletcher plans to work the trio Saturday morning but overnight rain Friday is in the forecast. “We are monitoring the weather,” Pletcher said.

On Thursday morning, Donegal Racing’s Mo Donegal was partnered by Amelia Green; Hector Ramos was aboard Whisper Hill Farm’s Charge It; and, Carlos Perez was on Pioneer of Medina.

The talented Not This Time colt is scheduled to work Sunday.

SMILE HAPPY, TIZ THE BOMB – Trainer Kenny McPeek’s Derby duo of Magdalena Racing’s Tiz the Bomb and Lucky Seven Stable’s Smile Happy galloped a mile and a half Thursday morning with Edwardo Ruvalcaba aboard Tiz the Bomb and Danny Ramsey on Smile Happy.

They are scheduled to have works on Saturday.

“Do all the homework now and get the prize next Saturday,” said Seemar, who was returning to Churchill Downs for the first time since 2002 when he was an assistant to Bob Baffert for War Emblem’s Derby.

Summer Is Tomorrow is scheduled to work Sunday.

Clay Courville had thought about bringing Un Ojo over to the paddock after training hours but opted to wait until Monday “when I have some help.”

Help is on the way as his dad left Lafayette, Louisiana, Thursday morning and will be in Louisville tonight.

Zandon is slated to have his final Derby work Saturday.

COCKTAIL MOMENTS – Dixiana Farms’ Cocktail Moments galloped a mile and a half and is scheduled to have her final work for the Longines Kentucky Oaks on Friday.

“She handled things very well,” trainer Bret Calhoun said. “She showed a lot of talent in the Fair Grounds Oaks and really gave it her all against Echo Zulu. I think she got a lot out of that race into the Kentucky Oaks.”

Hidden Connection is scheduled to work Friday with jockey Reylu Gutierrez in the saddle.

Trainer Shug McGaughey was on hand to watch the morning’s activity and said the undefeated Kathleen O. would work Saturday morning.

The Gazelle (GIII) winner is scheduled to work Friday or Saturday.

Also new on the wagering menu is the All-Dirt, All-Stakes Pick 5 on Kentucky Derby Day, which closes with the “Run for the Roses.” With a low 15% takeout, and 50-cent minimum, the sequence will cover the $160,000 Knicks Go, $750,000 Derby City Distaff presented by Kendall-Jackson Winery (GI), $750,000 Churchill Downs presented by Ford (GI), the Pat Day Mile and the Kentucky Derby.

The 20-cent Derby City 6, a jackpot wager where bettors must correctly tab the only winning combination to take down the entirety of the pool, handled more than $1.06 million on Kentucky Derby Day in 2019.

The bet will begin this Saturday for Opening Night and if multiple winning combinations correctly select six winners, 90% of the daily pool gets paid, while 10% will carry over to the next day. If no one correctly selects all six winners, the entirety of the day’s pool will carry over to the next day. The Derby City 6 pool will have a mandatory payout on Kentucky Derby Day.

Along with the Derby City 6, the return of the two-day Oaks/Derby Pick 6 will also be a top wager. The $2 minimum bet (2019 handle: $479,561) spans six Grade I events across Kentucky Oaks and Derby Days. The bet begins on Oaks Day with the $750,000 La Troienne (GI) and the $1.25 million Longines Kentucky Oaks (GI). It continues Kentucky Derby Day with the Derby City Distaff, Churchill Downs, $1 million Old Forester Bourbon Turf Classic (GI) and the Kentucky Derby.

Superfecta wagers will be a $1 minimum on Kentucky Derby and Oaks days but will be a 10-cent minimum on all other days.