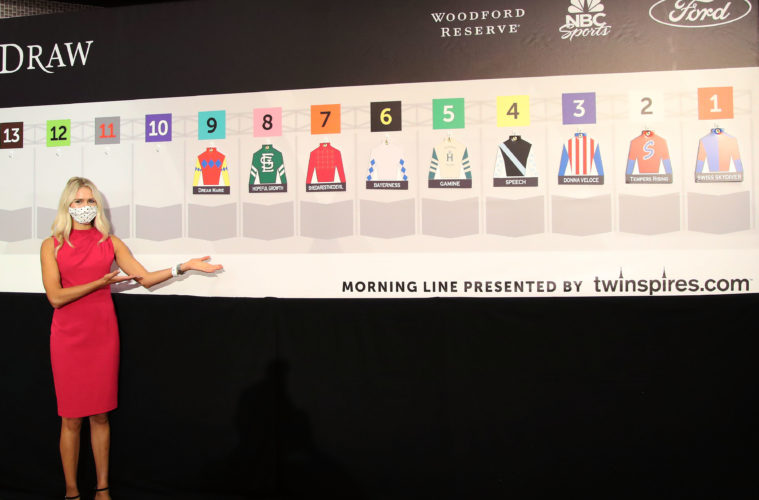 Gamine, the even-money morning line favorite, comes into the Oaks off blowout victories in the Acorn (GI) by 18 ¾ lengths going a mile and the Test (GI) going seven furlongs. John Velazquez, who won the 2004 Oaks on Ashado, has been aboard for those two victories and has the call again Friday.

Swiss Skydiver (8-5 on the morning line) has won her past four starts against fillies with a runner-up finish in the Blue Grass Stakes (GII) against the boys the lone blemish in the past six months.

Trained by Kenny McPeek, Swiss Skydiver notched her first Grade I victory in her most recent start in the Alabama at Saratoga. Tyler Gaffalione, who was aboard for the Alabama victory, has the call Friday and will break from post position one.

Eclipse Thoroughbred Partners, Madaket Stables and Heider Family Stables’ Speech (5-1 on the morning line) returns to Kentucky from her Southern California base following a last out victory in the Ashland (GI) at Keeneland.

Trained by Michael McCarthy, Speech finished second to Swiss Skydiver in the Santa Anita Oaks (GII) and prior to that finished a neck behind Gamine in a two-turn allowance race at Oaklawn Park.

Javier Castellano, who won the 2016 Oaks on Cathryn Sophia, has the mount on Speech and will break from post position four.

The trainer-jockey combination of Brad Cox and Florent Geroux, who teamed to win the 2018 Oaks with Monomoy Girl, are aiming for a second score in the Oaks with Shedaresthedevil.

Trained by Simon Callaghan, Donna Veloce enters the Oaks off a six-month layoff. Winner of the Santa Ysabel in her most recent start, Donna Veloce has compiled a 4-2-2-0 record with one of those runner-up finishes coming in last year’s Breeders’ Cup Juvenile Fillies (GI).

Listed at 15-1 on the morning line, Donna Veloce will be ridden by Ricardo Santana Jr. and break from post position three.