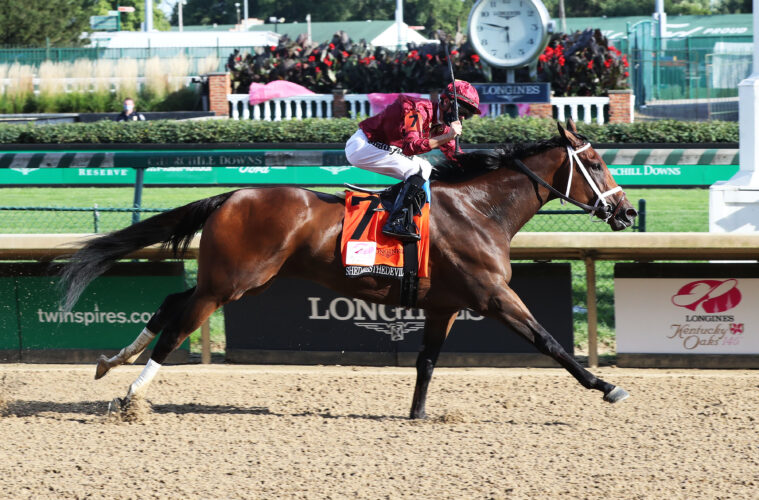 Trained by Brad Cox, Shedaresthedevil came off a five-month layoff to start 2021 with a victory in the Azeri (GII) at Oaklawn Park on March 13. Regular rider Florent Geroux will be aboard and exit post two.

Trained by Chad Brown, Dunbar Road will be making her 2021 debut after closing out 2020 with a third-place finish behind champion Monomoy Girl in the Breeders’ Cup Distaff (GI) at Keeneland. Winner of the 2019 Alabama (GI), Dunbar Road will be ridden by Irad Ortiz Jr. from post three.

Paris Lights, 2-for-2 at Churchill Downs in her career for trainer Bill Mott, won the Coaching Club American Oaks (GI) last summer and opened 2021 with a victory in the Distaff Handicap (GIII) at Aqueduct on April 2. Tyler Gaffalione has the mount from post five.

Godolphin’s Maxfield will look to get back on track following the first defeat of his six-race career when he tops a field of six older runners for the 18th running of the $400,000 Alysheba presented by Sentient Jet (GII) going 1 1/16 miles on the main track.

The Alysheba will be the sixth race on the 13-race program with a 1:26 p.m. post time.
Trained by Brendan Walsh, Maxfield notched victories in his first five starts that included triumphs in the Breeders’ Futurity (GI) at Keeneland, the Matt Winn (GIII) at Churchill Downs and the Tenacious and Mineshaft (GIII) at Fair Grounds. He finished third in the Santa Anita Handicap (GI) in his most recent start.

Dayoutoftheoffice won her first three starts that included scores in the Schuylerville (GIII) at Saratoga and the Frizette (GI) at Belmont Park prior to the Breeders’ Cup.

Gerardo Corrales has the mount Friday and will exit post 10.

Trained by Brad Cox, Aunt Pearl followed up her 5-length maiden victory Sept. 1 at Churchill Downs with another front-running triumph in the Jessamine (GII) at Keeneland that set her up for her Breeders’ Cup victory.

Regular rider Florent Geroux has the mount and will exit post six.

Diamond 100 Racing Club, Amy Dunne, D P Racing and Patrick Biancone Racing’s Diamond Oops makes his return to the grass Friday when he headlines a field of 11 for the 27th running of the $250,000 Twin Spires Turf Sprint presented by Sysco (GII).

Trained by Patrick Biancone, Diamond Oops will be attempting to become the first repeat winner of the Twin Spires Turf Sprint. He prevailed by a neck in last year’s running that marked his most recent start on grass.

Florent Geroux, who was aboard for last year’s victory, has the mount Friday on Diamond Oops who is making his 2021 debut. Diamond Oops will exit post nine.