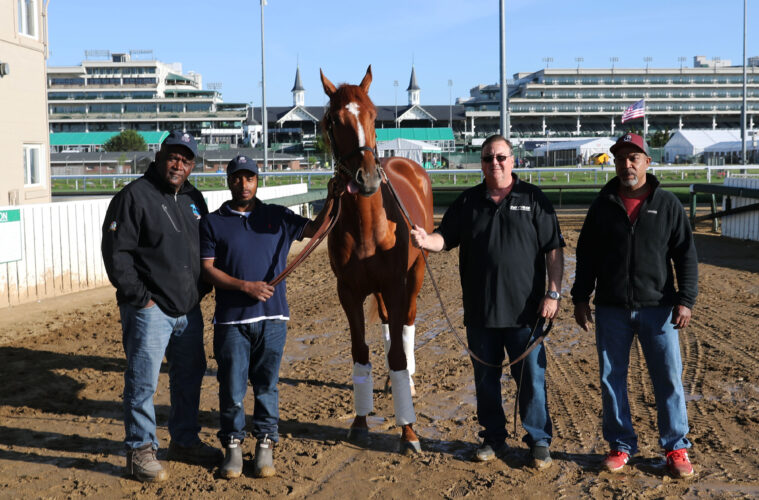 RED TR-Racing’s Rich Strike left Churchill Downs around 9:30 a.m. (all times Eastern) to head back to his main base at trainer Eric Reed’s Mercury Equine Center in Lexington on Sunday as a Kentucky Derby winner.

“I couldn’t sleep last night,” Reed said after achieving his first Grade I victory and second graded victory in a career that began in 1985. “At 4 this morning I was wondering if this was real or if it was a dream. I got home and my kids and their friends were there with champagne. I finally told them at 2:30 I had to go up to bed. I just kept seeing him in my head come up the rail.”

As the longest shot on the board in a field of 20 horses at 80-1, Rich Strike took advantage of a crafty ride from Sonny Leon to charge past Epicenter and Zandon in deep stretch to pull off the second biggest upset in Derby history with Donerail at 91-1 in 1913 serving as the biggest longshot winner.

Next on the agenda most likely will be Reed’s first trip to Pimlico and a shot at the Preakness (GI) on May 21.

“That’s probably the plan,” said Reed, who indicated Rich Strike would return to Churchill Downs to work over the track before deciding on the colt’s next start. “I’m not going to do a whole lot with him and I don’t like to run back quick. You get one like this in a lifetime and you have to protect him.”

A 17 ¼-length victory in a $30,000 maiden claimer at Churchill Downs last September had served as the only win on Rich Strike’s resume until Saturday. A fourth-place finish in the John Battaglia Memorial and a third-place finish in the Jeff Ruby Steaks (GIII) gave Rich Strike 21 points on the Road to the Kentucky Derby and enough to land a spot on the also-eligible list when entries were taken Monday.

“We were hoping and praying all week just trying to get there,” Reed said. “Then we went a step further than we could have dreamed.”

Despite breaking from post 20, Leon gave Rich Strike a ground-saving trip, immediately moving toward the inside behind a wall of horses shortly after the break and then cutting the corner at the top of the stretch.

“When I saw that move at the quarter pole, I told my dad (Herbert) that might get us on the board,” Reed said. “Then, I don’t really remember what happen except my back gave out on me. I ended up on the ground before the horse even crossed the wire. All my friends and family just piled on top of me. He looks great this morning. He ate up everything last night and seems really good. He gains weight after every race and I don’t think we’ve gotten to the bottom of him.”

As for Reed, it was a low-key night as he went back to Lexington where his wife Kay was overseeing the training center and 100 horses.

“My friends drank a lot but I didn’t,” said Reed, who has horses entered this week at Horseshoe Indianapolis, Mountaineer and Belterra. “I was happy for my crew and so proud that they got to make the walk (over to the paddock for the Derby).”

Reed’s story, coming back to win the Kentucky Derby with his first starter and a first-time Derby rider after a barn fire claimed 23 of his horses and all of his tack and equipment six years ago, is one that not even Hollywood could make up.

But if a movie could been made from this year’s Run for the Roses, who would play Reed?

“Maybe Mark Wahlberg,” Reed said with a laugh. “He’s short like me.”

EPICENTER (Second) – One day removed from Epicenter’s runner-up effort in the Kentucky Derby, Hall of Fame trainer Steve Asmussen was on the track alongside his trusty assistant Scott Blasi to continue their normal schedule of training.

Epicenter exited the Derby in good order, according to the team.

“We’ll just try and move forward. I haven’t spoken with (owner) Ron (Winchell) yet but I will later and will figure out what we are going to do next,” Asmussen said.

“We had a really good trip but just weren’t able to get the job done,” Brown said.

“I was very happy with his race,” Sano said. “I am going to talk with the owner in the next two days and a make a decision on whether to go to the Preakness or to go home.”

MO DONEGAL (Fifth), CHARGE IT (17th), PIONEER OF MEDINA (19th) – All was well at Barn 35 Sunday morning with the trio of colts that trainer Todd Pletcher had run the previous afternoon in the Kentucky Derby.

“They’re all doing well,” the conditioner said. “We’ll take a few days and have some conversations to figure out what’s next for them. But it’s likely they’ll be headed up to our stable in New York.”

For the first time in a long time, Pletcher is keeping a string of more than 30 horses at Churchill Downs for its spring meet. Currently his three Derby horses, as well as his trio of Oaks fillies, are among them. The trainer rarely runs in the next leg of the Triple Crown, the Preakness (GI) at Pimlico two weeks hence. He did, though, naturally enough when he won the Derby with Super Saver (2010) and Always Dreaming (2017).

The trainer will have some happy family duties this coming Saturday in College Station, Texas. That’s where his second son will don cap and gown to be pronounced a graduate of Texas A&M, the prestigious university that boasts the largest student body (72,981) of any school in the U.S. That will make two Aggie grads for the Pletchers: their oldest boy also did it previously and has gone on to veterinary school.

“Two down and one to go,” the seven-time Eclipse Award winner said. He and his wife Tracy have their daughter currently enrolled in Wake Forest University in Winston-Salem, North Carolina, where she has just finished her freshman year.

“He came back in good shape,” trainer John Ortiz said. “Had a wide trip.  But, came back really well.  He ate everything and is now resting.  I think we will let him tell us where and when he wants to run.”

“Obviously we are disappointed but we’ll hopefully be back next year,” Cox said. “We’ll regroup and plan what’s next.”

“Everybody looks good, no worse for wear,” Geier said. “It was a freaky race, who would have thought that horse would have won. But it’s the Derby, and anything can happen.”

CLASSIC CAUSEWAY (11th) – It was an easy day at trainer Brian Lynch’s Barn 40 at Churchill Downs where he reported 11th-place finisher Classic Causeway was doing well.

“We just didn’t break well yesterday,” Lynch said. “That took him out of his running style and had a lot of work to do. We’ll get him rested and find a spot for his return.”

The report was good. Both 3-year-olds were none the worse for wear and would, as he had noted after the race, “live to fight another day.”

“My family (his wife, Millie Ball, and his two teenage sons) will be on a plane and headed back to California today,” he said. “I’m going to stick around for a while. There will have to be some decisions made in the next 48 hours about what’s next for these two. Taiba is under consideration for the Preakness, but that call has yet to be determined.”

Reflecting on their Derby races, the conditioner wished for better, of course, but was philosophical about the results, saying “It is what it is.”

“I thought Johnny (Velazquez) rode a good race on Messier,” he said. “I’m not sure, but maybe we have to consider distance limitations with him.”

In the case of Taiba, who was making only the third start of his career, he felt the horse was hindered by all the kickback he encountered causing him to “climb some and be very uncomfortable.”

Also, he noted, “His lack of experience certainly could have played a role in the situation.”

HAPPY JACK (14th) – Calumet Farm’s Happy Jack, who had finished 14th in Kentucky Derby 148, was said to be “just fine” back at Barn 41 on the Churchill Downs backside Sunday morning. Assistant trainer Leandro Mora oversaw the nine runners from the Doug O’Neill stable who had set up shop at the Louisville track for Derby Week and beyond.

“He’s just fine this morning,” said Mora, a longtime assistant for O’Neill. “He’ll stay here now and train. Doug will be talking with the owners over the next little while and a decision will be made on where he goes next. He could run in the Preakness in Baltimore, or he could wait and go to New York for the Belmont.

“If I had to guess, I’d say he’d fit better in the Belmont. The way he runs he can go on and on. But it is not my call to make.”

WHITE ABARRIO (16th) – C2 Racing Stable and La Milagrosa Stable’s White Abarrio came out of the Derby without any problems, trainer Saffie Joseph Jr. said. The colt was alert in his stall, eyeing all the visitors checking him out.

“We haven’t decided when we’ll ship back to Florida, probably Monday,” Joseph said. “He’ll have some time off for a freshening before focusing on the summer races. But he’ll definitely not be going on to the Preakness.”

White Abarrio started from the No. 15 post and finished 15th. “Not exactly the result we wanted, but that’s racing,” Joseph said. “It was a big upset (by Rich Strike), but you have to be there to try to win.”

C2 Racing posted on Twitter: “Thank you to everyone for your support of White Abarrio. He’s doing well this morning after race day. Not an ideal trip, but that’s racing. It was an amazing experience to be in the Kentucky Derby! Congratulations to Rich Strike and the winning connections.”

SUMMER IS TOMORROW (20th) – Michael Hilary and Negar Burke’s Summer Is Tomorrow came out of the race well according to Caroline Seemar, wife of trainer Bhupat Seemar. Summer Is Tomorrow is scheduled to leave for Dubai on Tuesday.