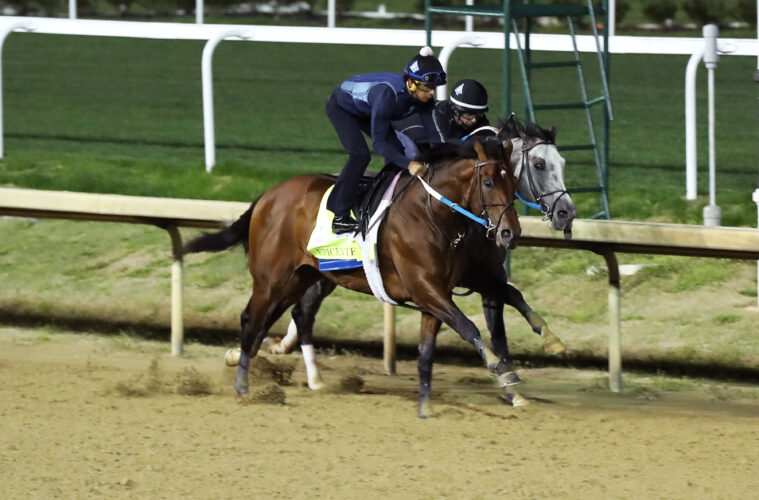 With less than two weeks remaining until the $3 million Kentucky Derby presented by Woodford Reserve (Grade I) and $1.25 million Longines Kentucky Oaks, top contenders Epicenter (six furlongs, 1:12.20) and Echo Zulu (six furlongs, 1:11.80) had their most serious workouts prior to the first weekend in May.

Along with Derby contender Epicenter, Teruya Yoshida’s UAE Derby (GII) winner Crown Pride (JPN) had another tune-up for the “Run for the Roses” and breezed a half-mile in :49.20.

L and N Racing and Winchell Thoroughbreds’ undefeated filly Echo Zulu was the first of Hall of Fame trainer Steve Asmussen’s duo to work. The daughter of Gun Runner breezed with exercise rider Wilson Fabian in the saddle. The duo broke to the inside of regular workmate King Ottoman, who was ridden by former jockey Eddie Martin Jr. Echo Zulu worked through eighth-mile fractions of :12.20, :23.80, :35.60 and :47.40. She galloped out seven furlongs in 1:25.20, according to Churchill Downs clocker John Nichols.

“We’re so happy the weather has cooperated on our scheduled work days. The racetrack is in great shape this morning,” Asmussen said after he arrived in Louisville following an eight-hour overnight drive from Oaklawn Park. “These were the most significant works for us. We’re following a pattern that we’re very comfortable with. I love the rhythm these horses are in. Both of these horses have kept their same workmates from New Orleans this winter. I’m unbelievably appreciative of the job Wilson and Eddie have done helping get them to this point.

“They’ve both started out as tremendous prospects and individuals. We’re aiming with incremental improvement to not take too big of a leap forward. So everything is a building block to success. Since they have arrived here at Churchill that trend has continued. I was so excited with Echo Zulu’s first work here.”

Asmussen, who is North America’s all-time leading trainer in wins, has made 23 starts in the Kentucky Derby but has failed to win the 1 ¼-mile event. His trainees have finished second and third, twice each, in the Kentucky Derby. His last starter to hit the board was Lookin At Lee, who finished second in 2017. Asmussen also finished third in 2016 with Gun Runner, second in 2011 with Nehro and third in 2007 with Curlin.

“I literally know what it feels like to win the Derby,” Asmussen said of Nehro. “I didn’t see Animal Kingdom coming down the center of the track that day. With Lookin At Lee, when Corey (Lanerie) cut the corner with him and the acceleration he showed going by tired horses, it just looked like he was going fast enough to win the Derby. Always Dreaming had enough to hold him off. The visuals of those moments were goosebump exciting. I’ve got 23 different feelings on the Derby but very vividly remember Nehro and Lookin At Lee.

“For Curlin’s Derby, I never thought that he’d get beat. The walkover for his Derby felt like it took three strides but the walk back felt like it was the Sahara Desert. He went to the Test Barn after the race with Zanjero (who finished 12th) and Zanejro was blowing hard. Curlin came out of the test barn and was his strong, usual self. He had enough ability but wasn’t meant to be.”

Epicenter and Echo Zulu are likely to head back to the track Tuesday.

In other Derby-related news, Asmussen removed Gotham (GIII) winner Morello from Derby consideration because the colt has a foot issue. Also, Jeff Drown’s Blue Grass (GI) winner Zandon arrived at Churchill Downs on Sunday morning. He is stabled with several other stablemates in Barn 25.

Florida Derby (GI) winner White Abarrio is slated to have his final training in Florida through Sunday, May 1 and arrive in Saffie Joseph’s Barn 10 by Monday, May 2. Simplification, who finished third to White Abarrio in the Florida Derby, is scheduled to arrive one day prior for trainer Antonio Sano.

DOWN THE STRETCH – Sunday was the first day of turf training from Churchill Downs on the new $10 million turf course. Pending inclement weather, the first turf races are scheduled on Saturday for Opening Night of the Spring Meet. … Monday will start the complete Kentucky Derby/Oaks news updates. Derby Weeks stakes probables will be listed then. … Opening Night of the Churchill Downs Spring Meet is Saturday. The theme is “Style Under the Stars.” For more information and to purchase tickets, visit www.KentuckyDerbyWeek.com.

DAWN AT THE DOWNS: DERBY, OAKS MORNING WORKOUTS OPEN TO PUBLIC – Churchill Downs will be open free-of-charge daily from 7-10 a.m. through Wednesday, May 4 so guests can watch the nation’s top 3-year-old Thoroughbreds train toward their engagements in this year’s Kentucky Derby and Kentucky Oaks.