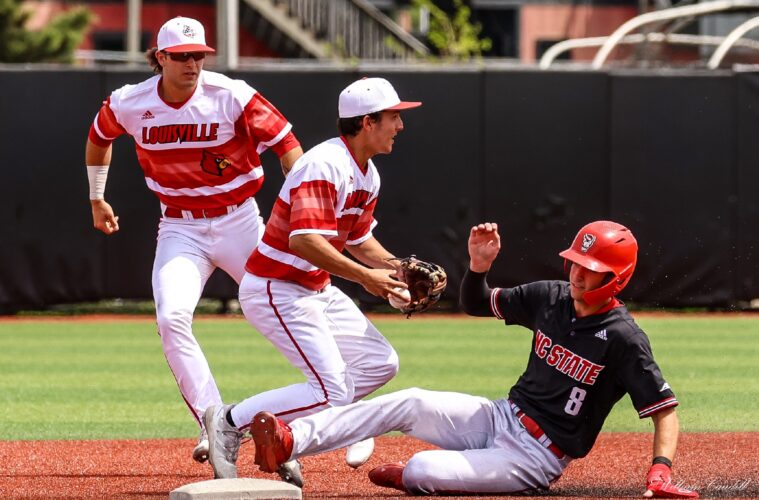 The 11th-ranked University of Louisville baseball team put together a late rally for the second time this weekend and defeated No. 23 NC State 11-7 on Sunday at Jim Patterson Stadium.

Louisville (27-12, 11-7 ACC) used a nine-run seventh inning to earn a win on Friday and put together a five-run eighth on Sunday to secure the series victory. The win was the 15th come-from-behind victory for the Cards this season.

Heading to the bottom of the eighth, the Cardinals were on the wrong end of a 7-6 score with six outs to play. Ben Bianco was hit by the first pitch of the inning and Christian Knapczyk and Ben Metzinger followed with singles to load the bases.

Jack Payton then delivered the biggest swing of the day with a ground-rule double down the left field line that gave the Cardinals their first lead of the day. Levi Usher added a run-scoring single and Logan Beard extended the lead with a sacrifice fly. Bianco then worked a bases loaded walk to force home the fifth and final run of the inning.

Michael Prosecky came on in the ninth and shut the door to close out the win.

The Cardinals responded with four runs of their own in the bottom half of the first, getting two-run singles off the bats of Usher and Isaac Humphrey.

The Wolfpack extended their lead to 6-4 in the fourth, but Dalton Rushing tied the game with a two-run blast in the bottom of the frame.

Usher was 3-for-5 on the day with three RBIs to lead the Cardinals. Knapczyk, Payton, Rushing and Humphrey all had two hits.

Carter Lohman (1-0) earned his first win of the season with 1.1 scoreless out of the bullpen. Louisville’s relief core of Tate Kuehner, Carson Liggett, Alex Galvan, Lohman and Prosecky combined to allow just one earned run over eight innings.